In June 2021, 50 Oregon students from 14 schools competed against approximately 2,700 students from across the globe at the National History Day® (NHD) contest. Each year, nearly one thousand middle and high school students from around the state work on projects that reflect an annual theme as part of Oregon History Day (the statewide NHD affiliate program). These emerging scholars spend a half-year or more researching their topics, often selecting a piece of history with personal relevance. I am proud to highlight a few of this year’s projects and the many ways that Oregon students interpreted the 2021 theme, “Communication in History: The Key to Understanding.”

Eleanor Song of Stoller Middle School in Beaverton (mentored by teacher David Gilde) finished fifth in the nation and won the Junior Outstanding Entry Award for Oregon for her Junior Individual Documentary, Transcript of Applause: Soong Mei-ling’s 1943 Speech to Congress. Mei-ling was educated at Wellesley College in Massachusetts. She later married the Nationalist leader of China, Chiang Kai-shek, and played a leading role in securing the United States’ support for China’s war against Japan from 1937–1945. Mei-ling was the first Chinese national to address both houses of the U.S. Congress. As Song details, “On February 18, 1943, Soong Mei-ling gave a speech to the 77th Congress that changed the way American strategists approached World War II. Her carefully planned, eloquent address earned China unrelenting aid from the U.S., understanding that Japan was just as dangerous an enemy as Germany, and a better world for Chinese Americans.”

Song’s documentary describes how Mei-ling’s historic action altered the lives of Chinese Americans, including for her and her parents. “My topic impacted the daily lives of many Asian Americans and specifically Chinese Americans, which I am. My parents wouldn't have been able to immigrate to America without it, and that would have drastically changed my life as well.”

Song demonstrates in her documentary how Mei-ling’s poise, style, and communication skills challenged Americans’ perceptions about Chinese women. The same year as Mei-ling’s speech, the U.S. Congress repealed the Chinese Exclusion Act of 1882, and her efforts are credited with aiding the allies in their eventual victory in World War II. As Song concludes in her documentary, “Soong Mei-ling and her 1943 speech to Congress are evidence that effective communication can bring about real change. And without change, how does humanity move forward?” 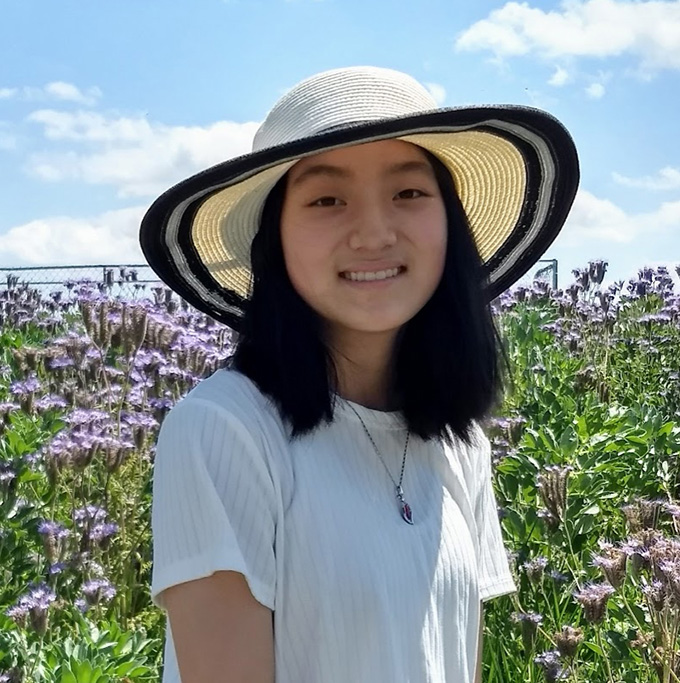 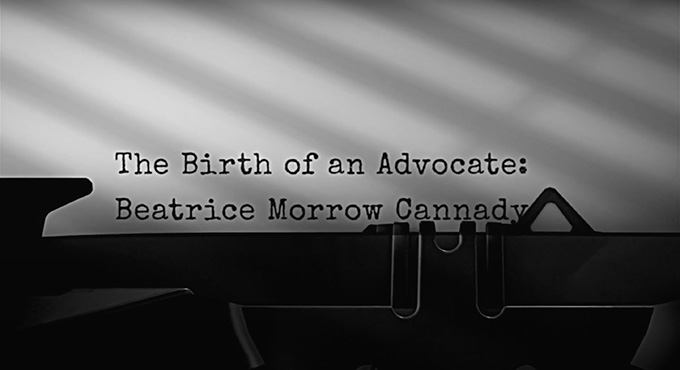 Alan Zhou of Beaverton’s Sunset High School placed eighth in the nation and received NHD’s African American History Prize for his Senior Individual Documentary, The Birth of an Advocate: Beatrice Morrow Cannady. The National Park Service sponsors the prize, and presents the award to one junior and one senior project at the national contest that demonstrates excellence in the study of African American history.

Beatrice Morrow Cannady was a well-known civil rights activist in Oregon. She was the editor of Oregon’s largest African American newspaper, the Advocate, and the founder of the Portland chapter of the National Association for the Advancement of Colored People (NAACP). Through the Advocate, she confronted racial discrimination, writing and organizing protests against the hugely popular, anti-Black movie, The Birth of a Nation.

For Zhou, Cannady’s work was immensely inspirational. “Through this year’s program, I learned more about Oregon’s civil rights history and the activism of an incredible individual, Beatrice Morrow Cannady,” said Zhou. “This was my fourth year participating in National History Day….It has been an amazing four years — definitely one of the most meaningful experiences of my academic career so far.”

Anja Jolin of St. Mary’s Academy in Portland (mentored by former teacher Lindsay Gebbie) also selected an Oregon topic of personal interest. Jolin placed eighth in the nation for her Senior Paper, “Bankrupting Hate: Berhanu v. Metzger and the Communications of the White Aryan Resistance.” Jolin was inspired to write on the subject after reading the Oregon Historical Quarterly’s Winter 2019 special issue “White Supremacy & Resistance.” According to Jolin’s process paper (which students submit with their projects to describe how they conducted their research, developed their topic idea, and created their entry), the increased attention to racial injustice fueled by the Black Lives Matter protests in 2020 motivated her to want to better understand the history of white supremacy in Oregon. 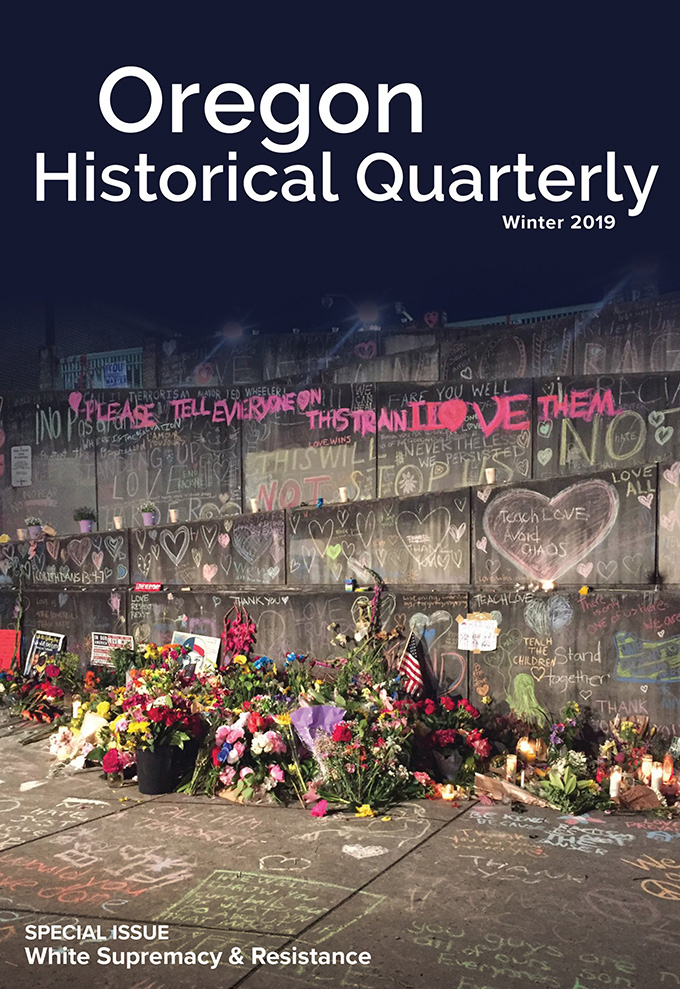 Jolin was inspired to learn more about Oregon’s history of white supremacy after reading the Winter 2019 special issue of the “Oregon Historical Quarterly” dedicated to this topic. 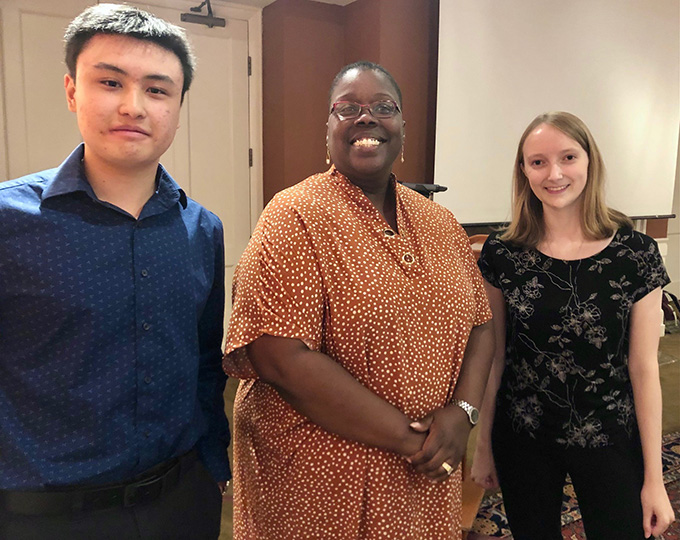 2021 Oregon History Day students Alan Zhou and Anja Jolin presented their projects to the Oregon Historical Society’s board of trustees at their annual retreat on Saturday, July 24, 2021. Here, they pose with trustee Justice Adrienne Nelson.

Through Jolin’s extensive research, she learned that:

Social movements throughout history have relied on communication to recruit, mobilize, and engage followers. Over the past century, white nationalists in the United States have been at the cutting edge of using innovations in communication technologies to build their movement. Tom Metzger, founder of the White Aryan Resistance (WAR) and one of the most notorious white supremacists of the late twentieth century, spearheaded the white nationalist movement’s use of mass media and the internet. Metzger used First Amendment free speech protections to disseminate his message and enlist followers. In the 1980s, Metzger targeted his recruitment at skinheads in Portland, Oregon, where white nationalist ideology was flourishing.

Oregon History Day is a powerful program. This immersive experience develops essential skills in reading, writing, questioning, researching, problem solving, analyzing, and presenting through the creation of films, papers, websites, performances, and exhibits on historic topics. When students are able to use the program as an opportunity to reflect on their personal histories, the power of Oregon History Day amplifies tenfold.

All students and teachers in grades 6–12 around the state may participate in Oregon History Day. With the new school year on the horizon, we are already gearing up for the 2022 program. The 2022 national theme is Debate and Diplomacy in History: Successes, Failures, Consequences, and we invite educators to get in touch to learn more about bringing Oregon History Day into the classroom.