After visiting the Oregon Historical Society’s 2019 exhibition “On the Edge,” Visitor Experience Associate Kay Knack was inspired to continue her quilt studies and create an “art quilt” worthy of the name. Pictured here is a detail of Knack’s completed art quilt block, a tribute to Lloyd “Tony” Stevenson, Jr., that she made as part of the Social Justice Sewing Academy’s Remembrance Project. Photo courtesy of Kay Knack.

In 2019, the Oregon Historical Society (OHS) hosted an exhibition of art quilts, On the Edge, created by local Studio Art Quilt Associates (SAQA) artists. Since joining OHS’s visitor experience team in 2004, I have seen countless exhibitions over the years I have spent connecting with visitors and members coming to our museum, research library, and museum store. As an artist myself, this exhibit in particular drew me in, and I visited the show every chance I could. I was inspired as I saw up close many new techniques including raw edge appliqué, fabric collage portraits, hand-dyed fabrics, the improv nature of the designs — I loved it all! I came away with a goal: I would continue my quilt studies and actually make an “art quilt” worthy of the category in two years’ time. 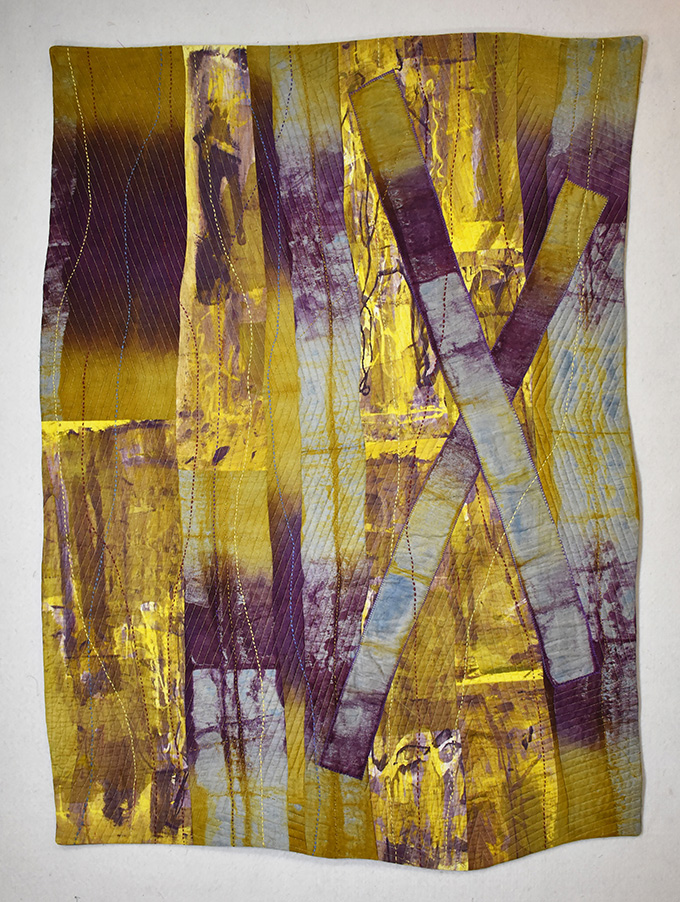 This art quilt by SAQA Oregon artist Judith A. Beaver titled, “Standing Strong,” was particularly inspirational to Knack during her visits to the 2019 OHS exhibit “On the Edge.”

It wasn’t until March 2020, when OHS temporarily closed to help slow the spread of COVID-19, that I decided to volunteer for the Social Justice Sewing Academy (SJSA) and make a quilt block for the SJSA Remembrance Project, a community art project using portrait and symbolism to honor individuals “murdered in a politically or racially motivated manner.” Youth from Oakland, California, started SJSA, and I was moved by their powerful images and messages — so I jumped in to lend my energy.

SJSA members asked me to create a tribute to the life of Lloyd “Tony” Stevenson, Jr., a U.S. Marine Corps veteran, husband, and father, who was killed by Portland police at the age of 31 in 1985. While it was not required to make a portrait, I was inspired by a photograph of Stevenson in his uniform and decided to use it as the basis for my art quilt tribute. I used several techniques that I had studied in the SAQA show for the first time — raw edge appliqué throughout and hand-sewn fabric collage for his portrait. I chose the rose to represent his home of Portland, the Bruce Lee logo to honor his martial arts skill, and the argyle pattern he loved to wear. For the border, I chose an African fabric. I hand-embroidered the place and dates of his life, a slow stitch meditation. 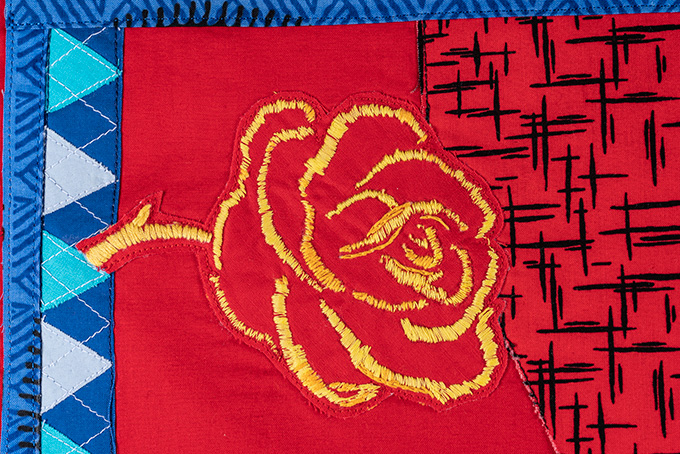 Knack included details throughout the quilt block to provide insights into Stevenson’s life, including this yellow rose, chosen to represent his home of Portland, Oregon. Photo courtesy of Kay Knack.

As I worked on this project, I was reminded of an article written by scholars Leanne Serbulo and Karen Gibson for the Spring 2013 issue of the Oregon Historical Quarterly about police-community relations in Portland, which includes Stevenson’s story. In the article, “Black and Blue: Police-Community Relations in Portland’s Albina District, 1964–1985,” which is free to read on the OHS website, Serbulo and Gibson explore the tensions between the city police force and African Americans in Portland through the late twentieth century. The authors chronicle how, over two decades bordered by African Americans’ deaths at the hands of police, neighborhood activists attempted to reform the police department and met resistance. The authors conclude that transformation of the relationship between police and the Black community could have been accomplished only through strong action by elected officials.

Along with the finished quilt block, I also submitted an artist statement to the SJSA Remembrance Project, which reflects on Stevenson’s life and the events surrounding his death as well as reinforces the power of art for reflection and remembrance. I hope to continue to learn more about art quilts and textiles, and I have just started volunteering on Tuesday mornings with OHS’s Curator of Collections, Helen Fedchak, to support the preservation of the many pieces of clothing and quilts in the museum’s collection. If you share my love of art and textiles, please be sure to mention it on your next visit to OHS! 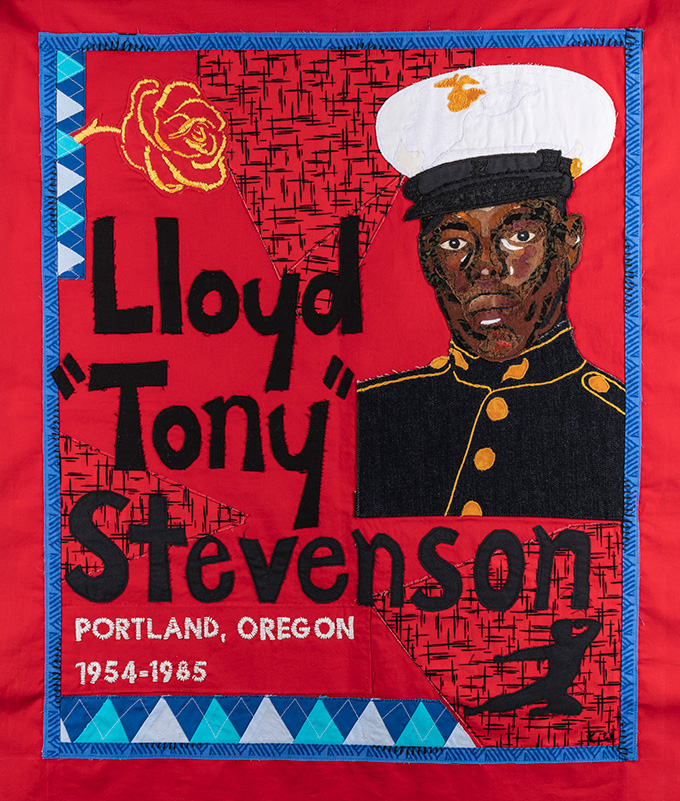 Lloyd “Tony” Stevenson, Jr., was already a Marine veteran, loving husband, and father to five children when he was killed by Portland police at the young age of 31 in 1985.

By chance, he’d gone to the corner 7Eleven to get some ice cream for movie night with the kids. A burglary was underway when he arrived. The suspected shoplifter and the clerks were in the parking lot wrestling. A couple workers from the neighboring gas station had come, armed, to “help,” and Tony was in a shouting match with them to prevent that escalation. When police arrived, they assumed Tony was the burglar, got him to the ground, and put him in a “sleeper hold.” Bystanders told the police they had the wrong man to no avail. His last words were, “Just let me show you my ID.” He never regained consciousness.

It made sense that he would try to intervene and de-escalate the situation. He was a martial arts expert in karate. In fact, he was called “Portland’s Bruce Lee” in his social circle, and even demonstrated his skills on a local TV show. One of his IDs would have shown that he worked as a Security Supervisor for Loss Prevention (shoplifting) at Fred Meyer, our largest grocery chain. Little did the police know that he aspired to become a state trooper, was a Vietnam veteran, and was serving in the Army Reserves at the time of his death. He is buried with military honors at Willamette National Cemetery.

A citizens’ inquest was held after people took their outrage at his death to the streets. The inquest found the two officers guilty of criminally negligent homicide, but the following Grand Jury refused to bring indictments against the officers. I learned a lot from his life. He could have been my younger brother. We were born 3 years apart. His Marine Corps photo became the foundation for the quilt block. I was thrilled when I saw it on my first search for information about him. Such a handsome and confident young man! How courageous he was to enlist in the Marines! How proud his family must have been. On his return, he went to Portland Community College, met and married his wife, and started creating a family. He worked hard, sometimes two jobs, keeping it all humming along. His daughter said he loved to dress in his diamond argyle sweaters for all her school events. He loved classical music, his church and his community, and most of all his growing family with five children, ages one to eleven when he died. He even volunteered and taught karate to kids in Portland.

I never made anything like this before and I called on his strong spirit for help many times. If I doubted myself, I thought of him and how much he’d accomplished in his short life. I wanted to make something worthy of his large loving life that his family would be happy with — I hope it makes them feel good if they see it. For all who see it, know that this power we call life continues through everything we experience in our lifetimes and beyond. I worked on his portrait all through the Chauvin trial for the murder of George Floyd, and cried, and prayed. If it weren’t for Darnella Frazier shooting the video… I’m so thankful for her courage. I’m also thankful for this Remembrance Project. And for my gifted daughter, Wonder Knack, who created this design for me. Most of all, for this time with Lloyd Tony Stevenson and his beautiful spirit, these last two months I spent sewing, making this tribute to him. He helped me keep going and taught me more about myself in the process. Respect is due, I salute you, Tony. Rest in Power and Peace and I’ll see you down the road.