On July 16, 1913, hundreds of people congregated at the D.P. Thompson elk fountain to address the merits of socialism and the need for labor unions to protect worker safety. The fountain is pictured here around 1930. OHS Research Library, Oregon Journal Negative Collection, Org. Lot 1368, box 371, 0371N5461.

Shortly after eight o’clock in the evening on July 16, 1913, a parade of about 250 men marched up 6th Avenue in Portland, Oregon, toward the Plaza Blocks, where they congregated at the D.P. Thompson elk fountain on Main Street. They attracted hundreds of onlookers, including twenty uniformed police officers and twelve detectives. The men, who were convening lawfully by permission of Mayor H. Russell Albee, climbed the fountain to address the crowd about the merits of socialism and the need for labor unions to protect the safety and pay equity of workers. Under the banner of the Industrial Workers of the World (IWW), the protesters spoke for over an hour, until only a handful of union members and plainclothesmen remained. By ten o’clock, the park was empty.

The mundanity of the event reportedly disappointed many of the spectators. Earlier that week, the IWW had staged a more raucous protest at the Oregon Packing Company on Southeast 8th Avenue and Belmont Street, a workplace notorious for its low pay, dangerous working conditions, and mistreatment of workers. The laborers, a majority women, had decided to strike, and the IWW joined in support. On July 11, Gov. Oswald West arrived at the picket line, climbed onto a “tar barrel,” and loudly debated with labor leader Tom Burns, a local socialist who no doubt brought his own box to stand on. Both men were creative, eloquent, and lively speakers. It must have been something to see and hear.

The next day, West met with city officials and union leaders again at City Hall, perhaps to resolve the strike. The heat of their earlier battle must have carried over because the discussion ended with West rising up, this time by climbing on the mahogany table, to “shake his finger” at Burns and demand that he retract his criticism of the Industrial welfare commission. Burns’s response: “I’m not scared.” 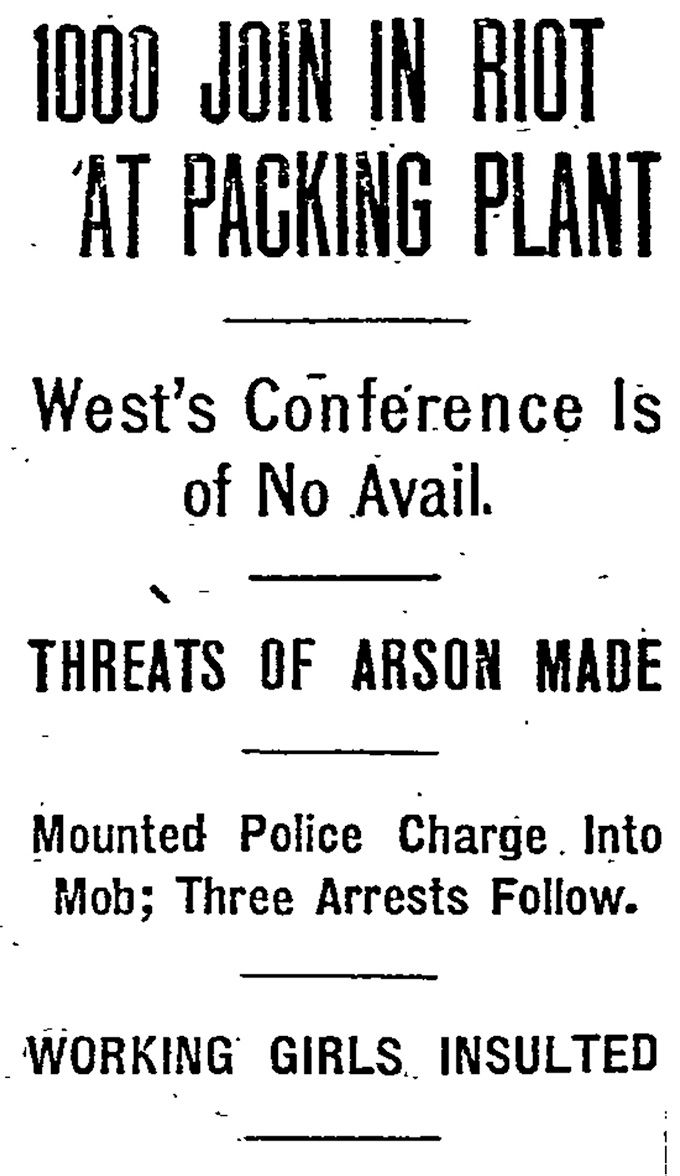 On July 13, 1913, the “Oregonian” reported on a protest that took place at the Oregon Packing Company on Southeast 8th Avenue and Belmont Street in Portland over low pay, dangerous working conditions, and worker mistreatment. 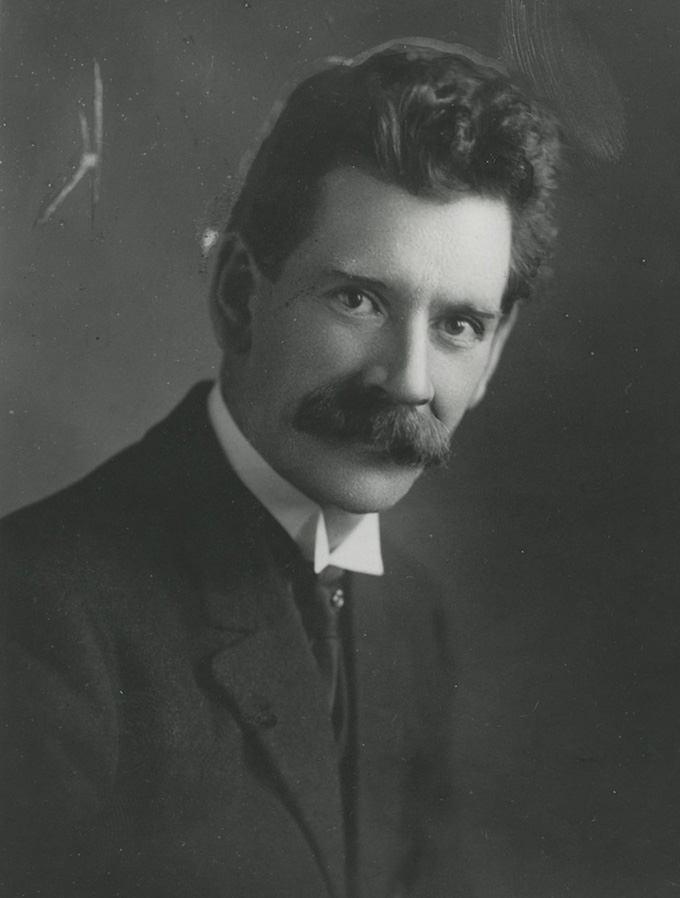 Radical activist Tom Burns, pictured here in 1914, lived by this guide: “I always thought everybody should have enough, before anyone had too much.” OHS Research Library, OrHi 77727.

The IWW leaders left City Hall in anger, as did the governor, and the city decided to end the parlaying and stop the strike with force. During the next few days, police mounted on horses knocked down protestors and ordered them to disperse. Strikers taunted the workers who broke the picket line, and fights broke out in the street. Locals who opposed the strike donned “flaming red badges,” dubbed themselves the “advisory strike committee,” and “hurried about, ostensibly assisting the police in keeping order, but actually inciting trouble.” The so-called riot spread a full block around the plant, and the Oregonian described it as “the wildest time Portland has had in a long while.”

In response, Mayor Albee banned all public speaking, so Burns moved his soapbox to his favorite spot on 6th Avenue and Washington Street, where he excoriated city leaders. He was beaten and jailed (and convicted and sentenced to pound rocks for forty days). The next day, Albee lifted the order to allow for the rally at the Thompson elk statue.

If any part of this story feels familiar, it should. In many ways, protest is a performance with a script of sorts, where people test the “system” and the representatives of that system dig in to protect it. There is nothing inevitable about it — although clashes at the elk statue may feel inevitable — and yet social resistance has the appearance of repetitive efforts with incremental returns. Are we spinning our wheels or accomplishing something?

We can start by asking whether public protests work.

History says yes. People across the centuries have protested because it elevates individual hopes and fears into communal calls for change. Well-organized protests are performances of collaborative intent and emotion that often lead to effective activism and legislative remedies. Protests articulate ideologies, identify crucial points of disagreement and conflict, and often force mediation and compromise. They also uncover civic weaknesses, exposing institutional systems to scrutiny and reform. Sometimes those institutions respond by reorganizing; sometimes they double down and become more rigid.

But did public resistance work for the Oregon Packing Co. workers? It did. Their pay went up, and management improved working conditions. The city learned its lesson, too: next time, act more quickly and decisively to the threat of labor strikes. And the stage was set for the next time, and the time after that.

History also tells us that public displays of protest are the tip of the iceberg of resistance movements. Change is a long game, and it often takes years of tedious work to reform systems. While people are in the streets, others are in meetings, running for office, writing laws and memorials, organizing, and educating. That is the work that brings meaning to the performance. 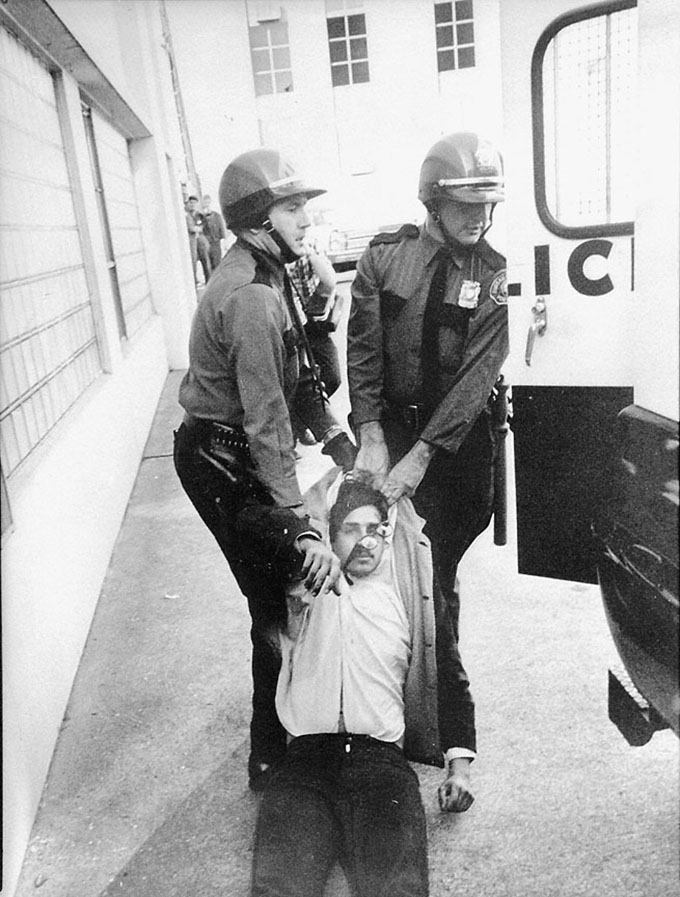 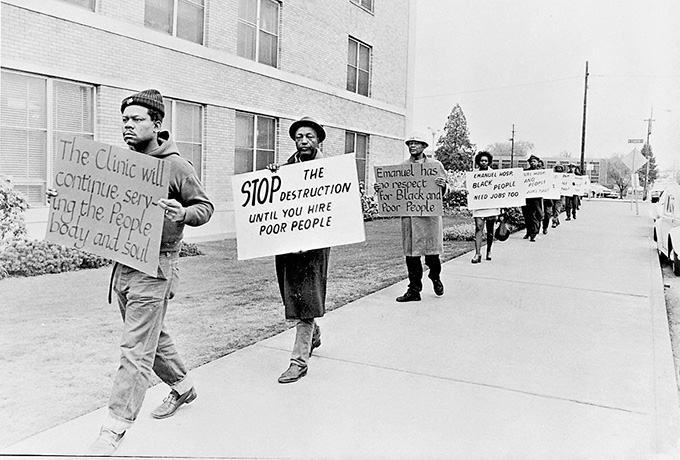 In 1973, Albina residents picketed the Portland Development Commission (PDC) over urban redevelopment that tore down existing buildings in the historically Black neighborhood to make room for a hospital expansion. The redevelopment plans allowed the city to condemn and tear down hundreds of homes and businesses, which displaced a significant number of Albina neighborhood residents. OHS Research Library, CN 023743.

The call for racial justice today is the most recent iteration of resistance by Oregonians who have been subject to racial and cultural discrimination since the white settlement of the West. As we witness the physical clashes between protestors and police every night in Portland, we must remember that non-white, non-male, and non-straight Oregonians have been taking the hits for over a century, and all of us have benefited from their endurance.

For decades, Oregon has inched closer to the ideals of equality and citizenship expressed in its Bill of Rights because of the efforts of activists who have walked into every part of the public square — at the Thompson elk fountain and hundreds of other locations — risking censure and violence in the name of a better, more just place to live.

Oregonians have joined national protest movements many times over the decades — for civil rights, social justice, environmental policy, labor conditions, and government reform. You can read more about how public activism in Oregon has reflected the divergent interests of its residents on The Oregon Encyclopedia: Tree Sitters and Timber Wars, irrigators and Native fisheries, public lands and private property, business interests and labor organizers. Oregonians have called for racial equity, peace, and equal protection under the law, suffrage, birth control, the Equal Pay Movement, and the right to equal citizenship and protection under the law. 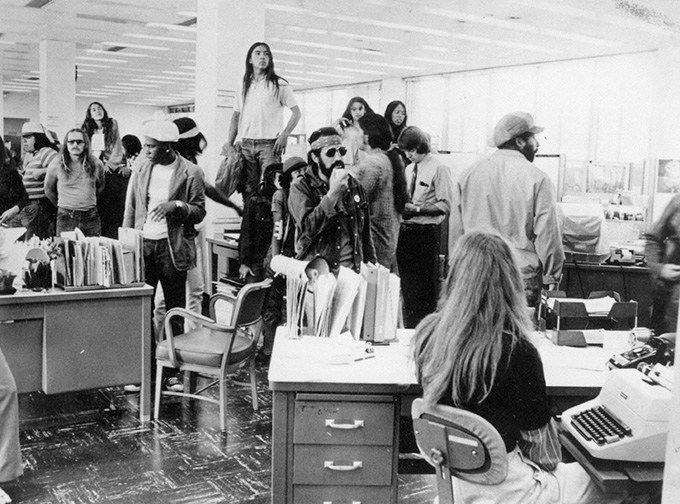 On August 15, 1975, about 100 Indian protesters took over the Portland offices of the Bonneville Power Administration (BPA). This action was the culmination of almost two weeks of activities organized to protest what Native activists considered to be federal repression on South Dakota’s Pine Ridge and Rosebud Indian reservations. Office takeovers and other acts of civil disobedience were common tactics among Indian activists during the 1960s and 1970s. OHS Research Library, Oregon Journal Collection, CN 022653.

Epilogue: Don’t Take it Out on the Thompson Elk

There is something poetic about the Portland protests petering off after the Thompson Elk was removed from its pedestal on Main Street. Perhaps “Let’s meet at the place the elk, uh, used to be” does not have the ring of romance to it.

The damage of the elk, its removal, and now the debate over its return are all part of the performance of protest, from both sides. In many ways, mourning (or celebrating) the empty plinth is much easier to deal with than the actual circumstances of its absence.

Did the protests work? Since we last visited the elk, Mayor Ted Wheeler has implemented his Police Reform Actions, including the regulation of chokeholds and the use of force against passive protesters. Don’t Shoot Portland, the Oregon Justice Resource Center, and the ACLU have all filed lawsuits against the use of excessive force by Portland police. The state legislature has introduced a slate of reform bills, directed at making police departments in Oregon more just and less violent, specifically acknowledging the racial inequities in enforcement and tactics. The president of the controversial police union has been replaced.

There can be no doubt that organized, focused protests in the streets by groups such as Black Lives Matter forced a reckoning over racism and violence in law enforcement. At the same time, organized reformers did what they have always done — articulated strategies, met with governments, helped elect new leaders, educated the public, and held people accountable. It is work, and that kind of work does not end. The months of public protest in 2020 and 2021 do not mark the beginning of racial justice efforts. Oregonians have been battling that inequity for almost two centuries. But they also have to keep marching to the elk statue to remind people that the work continues and the rest of us need to know about it. There is no excuse for being unaware of the issues, and the way we respond to this call to action, as individuals and as institutions, matters.

So, bring back the Thompson Elk, but not as a symbol of Portland before the protests but as a nod to the thousands of people who used it as a starting point to find a collective voice for change — not to tear the city down, but to make it better.