Home Blog Look at What He Did! A Behind the Scenes Look at the Many Shades of Being Darcelle

OHS’s exhibit, “Many Shades of Being Darcelle: 52 Years of Fashion, 1967–2019,” features eight costumes, a jean jacket, and jewelry from Walter Cole’s collection. Cole is well known to many as Darcelle, an iconic drag queen in Portland, Oregon. These costumes represent significant decades during Darcelle’s career.

For many, Walter Cole’s female stage persona, Darcelle XV, is an icon in Portland, Oregon. The Oregonian has even included him on its “100 Greatest Oregonians Ever” list. Since 1973, Darcelle has headlined at Cole’s cabaret club, Darcelle XV Showplace, which is the longest-running drag show on the West Coast — making Darcelle the Guinness World Record holder for “oldest performing drag queen.” During that run, Darcelle has worn an array of costumes — more than 1,500, many handmade by Cole — bedecked in feathers, beads, and even lights. The Oregon Historical Society (OHS) is excited to feature a selection from Cole’s collection in its new exhibit, Many Shades of Being Darcelle: 52 Years of Fashion, 1967–2019, on view now through November 3, 2019.

Last week I interviewed Lori Erickson, OHS’s Curator of Exhibitions and Special Projects, and Don Horn, founder of triangle productions!, to learn more about the work that went into making Darcelle’s costumes (literally) shine. Those conversations not only helped me appreciate the efforts required to develop even a small exhibit such as this one, but they also revealed a lovely tribute to Cole’s career as a business person and performer whose finger has been on the pulse of Portland’s counter culture for over fifty years.

In 2017, when Horn approached OHS’s Museum Director about hosting an exhibit featuring some of Darcelle’s costumes, he was also working on a musical production, That’s No Lady, and book of the same title. Through that work, he had gotten to know Cole and his influence here in the state. According to Horn, “many people know Walter as a drag queen, but he is also a successful businessman and talented costumer — look at what he did!” He wanted to have the exhibit at the Oregon Historical Society because Cole represents an important part of Oregon history. 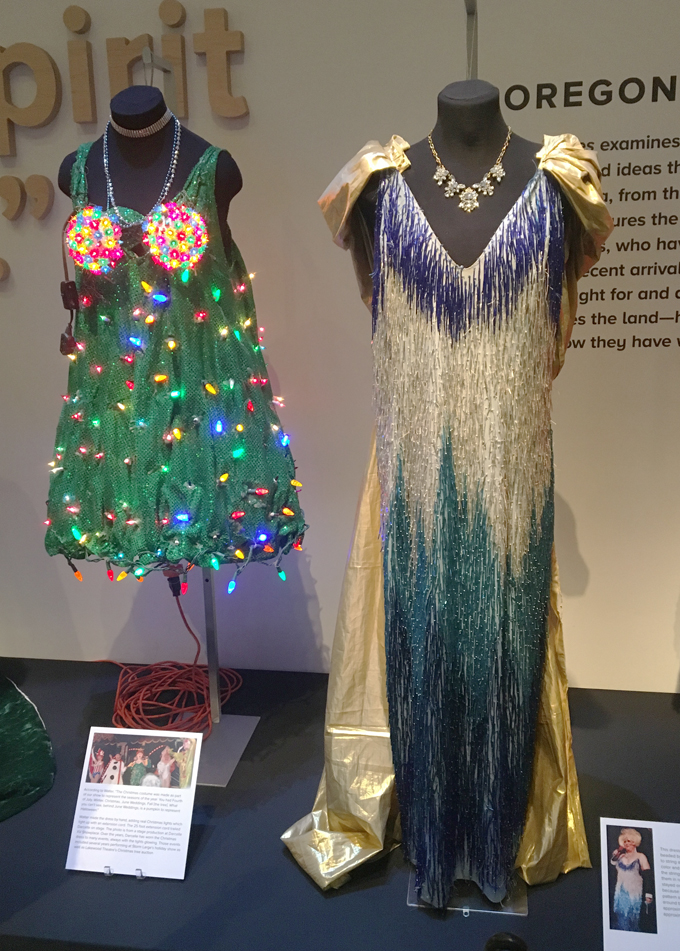 Darcelle’s Christmas dress and blue and white beaded dress are on display in OHS’s “Many Shades of Being Darcelle” exhibit. Note the orange extension cord toward the bottom that trailed behind Darcelle during performances and illuminated the Christmas light details. Cole beaded the blue and white dress by hand, a process that took three months to complete. 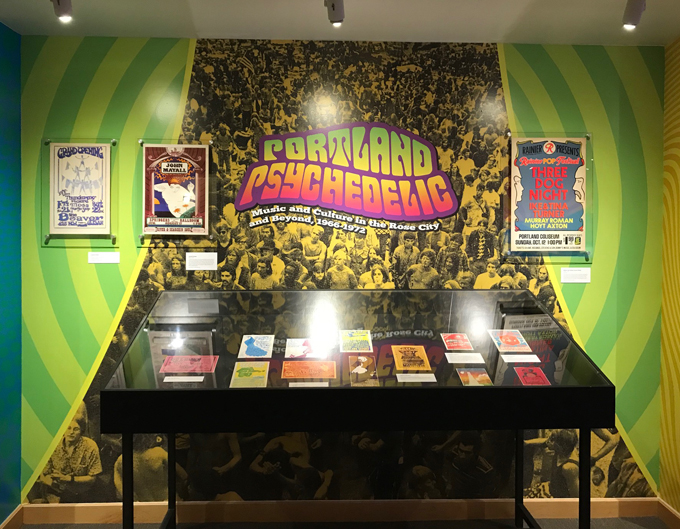 In 2018, the Oregon Historical Society hosted the “Portland Psychedelic” exhibition that featured psychedelic posters, handbills, and autographs from bands such as The Doors and Buffalo Springfield. One of those posters was from an event at Caffé Espresso, which Walter Cole (Darcelle) owned during the 1960s.

Before starting the project, Erickson had been familiar with Darcelle’s reputation as a famous drag queen and immediately realized Cole’s connection to the 2018 OHS exhibit, Portland Psychedelic, which she also helped curate. One of the posters on display in Portland Psychedelic (on exhibit at OHS from July 10, 2018, to March 17, 2019) was from a performance at Caffé Espresso, Cole’s after-hours club that was influential during the 1960s in developing the psychedelic rock scene in Portland. These two seemingly unrelated exhibits share a very important connection — Walter Cole — and reinforce his significance here in Portland and beyond.

For Many Shades of Being Darcelle, Horn worked with Cole to sort through over 1,500 costumes, and together they selected eight dresses and a denim jacket that represent different periods in Darcelle’s career. The costumes are displayed roughly in chronological order from left to right, starting with Gracie Hansen's 1965 dress that Cole purchased after her death in 1985 — Cole altered many of Hansen’s dresses to fit his six-foot frame. When Cole began performing as Darcelle, he had little experience sewing, and the first garment he created was a pair of white leather pants that he constructed on his living room floor. According to Horn, Cole attributes his abilities to the fact that he comes from a long line of tailors, including his mother and grandmother — and, he continues to pass along this tradition by teaching his daughter to sew.

Cole’s sewing skills improved over the years, as evidenced by the increasingly intricate and clever designs through the decades, including a dress adorned with colorful, pressed marbles. Horn explained that Cole affixed the marbles to the dress with a type of hot glue: “Back then, hot glue guns didn’t exist, so you had to purchase chunks of glue that needed to be melted down.” 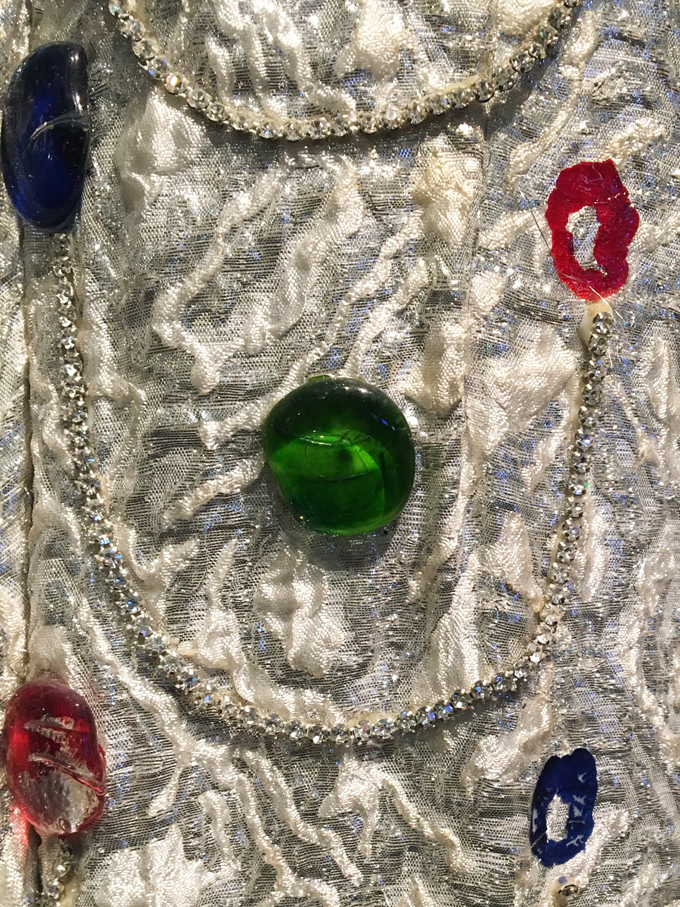 This detail shows the flattened marbles glued to one of Darcelle's dresses on display in the OHS exhibit. Some of the marbles are missing, revealing remnants of the hot glue Cole used to affix the decorations. 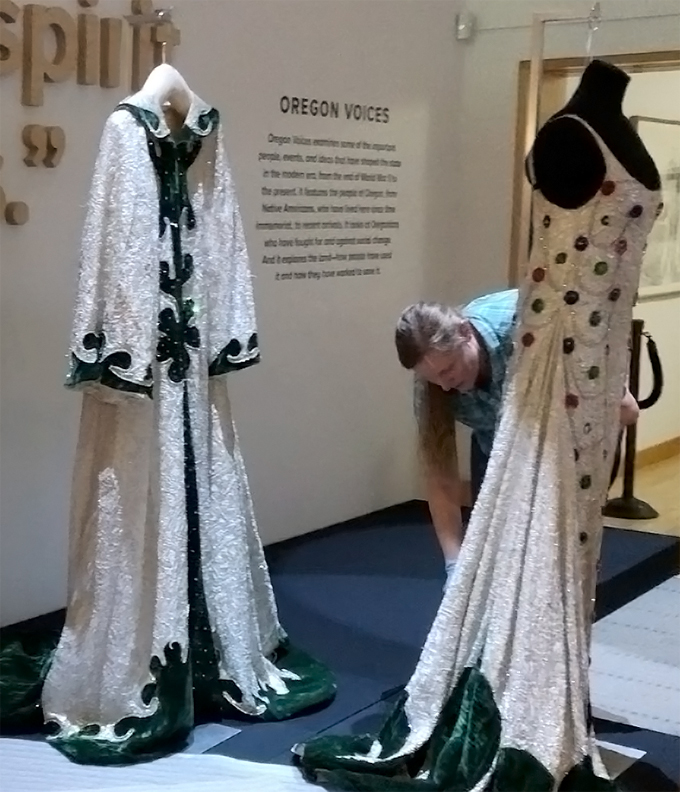 Helen Fedchak, OHS’s Curator of Collections, works with Walter Cole’s marble dress during the exhibit’s installation. She altered some of the dress forms so they could correctly support the pieces on display.

Displaying special garments such as these requires skill and expert attention. Erickson explained how Darcelle’s costumes, some of which weigh upwards of twenty-five pounds, had to be carefully handled by OHS’s Curator of Collections, Helen Fedchak, to fit dress forms and hangers specially designed to support the garments. OHS exhibit production staff also spent time getting all the details just right, including Darcelle’s orange extension cord that trailed behind while illuminating the Christmas tree dress. 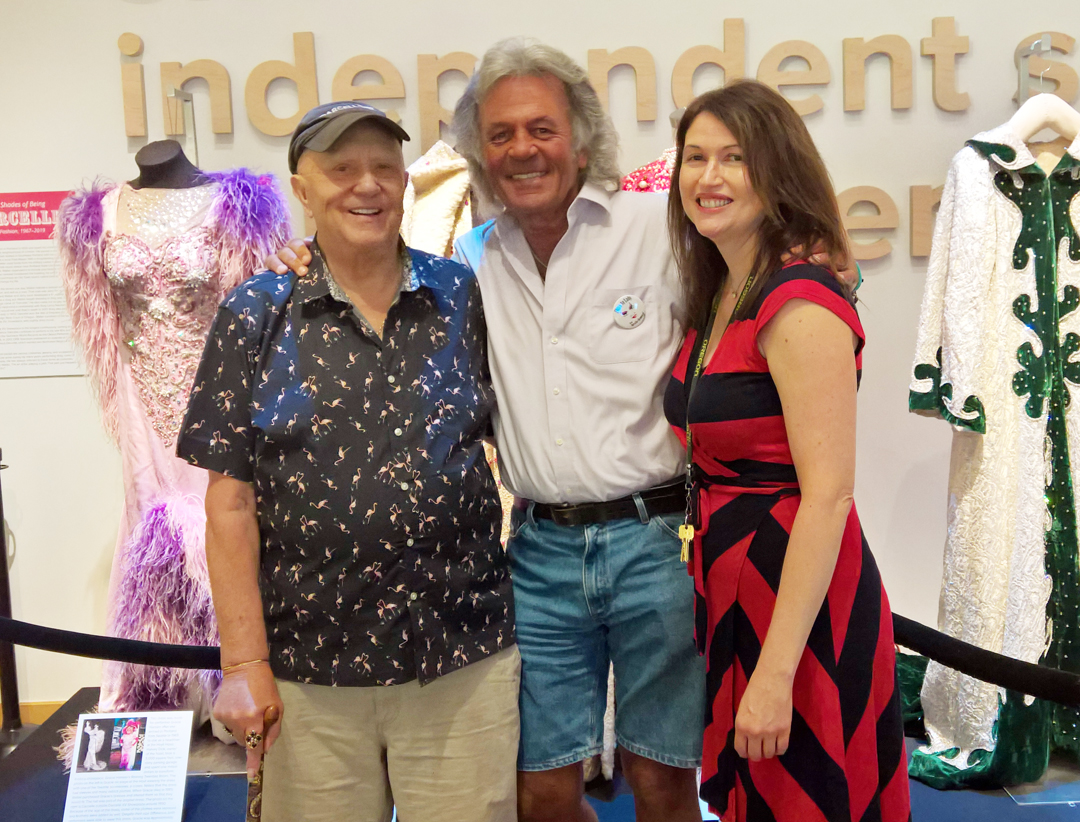 When asked if there would be one takeaway for visitors after seeing the exhibit, Horn said that he would “love for people to go home knowing that Walter is a multi-faceted individual.” His importance to Oregon history goes far beyond being a famous drag queen. Be sure to stop by OHS’s Casey Lobby near OHS’s permanent exhibit, Oregon Voices, which highlights some of the important people, events, and ideas that have shaped Oregon. Cole and Darcelle — both inspiring and independent spirits — have certainly earned a spot among those who have made their mark on the state.