OHS’s newest exhibit, “Barley, Barrels, Bottles, & Brews,” takes visitors through a timeline of Oregonians’ obsession with beer. This history, dating back to the Lewis and Clark Expedition, has grown into a movement — as of 2016, Oregon had 230 brewing companies operating out of 73 different cities.

For over a year, I have been developing Barley, Barrels, Bottles, & Brews, an exhibit at the Oregon Historical Society that highlights the history of brewing and hop agriculture in Oregon. Planning the exhibit was a journey that involved consulting with experts in the field as well as the impressive Oregon Hops and Brewing Archives (OHBA) at Oregon State University. Along the way, I also ended up finding a wealth of material in OHS’ own collections.

With the help of historians and archivists, I narrowed down the main messages of the exhibit, and selected stories that best illustrate Oregon’s brewing and hops history. Oregon’s beer history spans a long time period, dating back more than 200 years to the Lewis and Clark Expedition and the first documented beer brewed in Oregon Country. The resulting exhibit displays a large number of OHS objects and photographs — and includes the stories those objects and images tell. Below are a few highlights from Oregon’s early years in brewing. 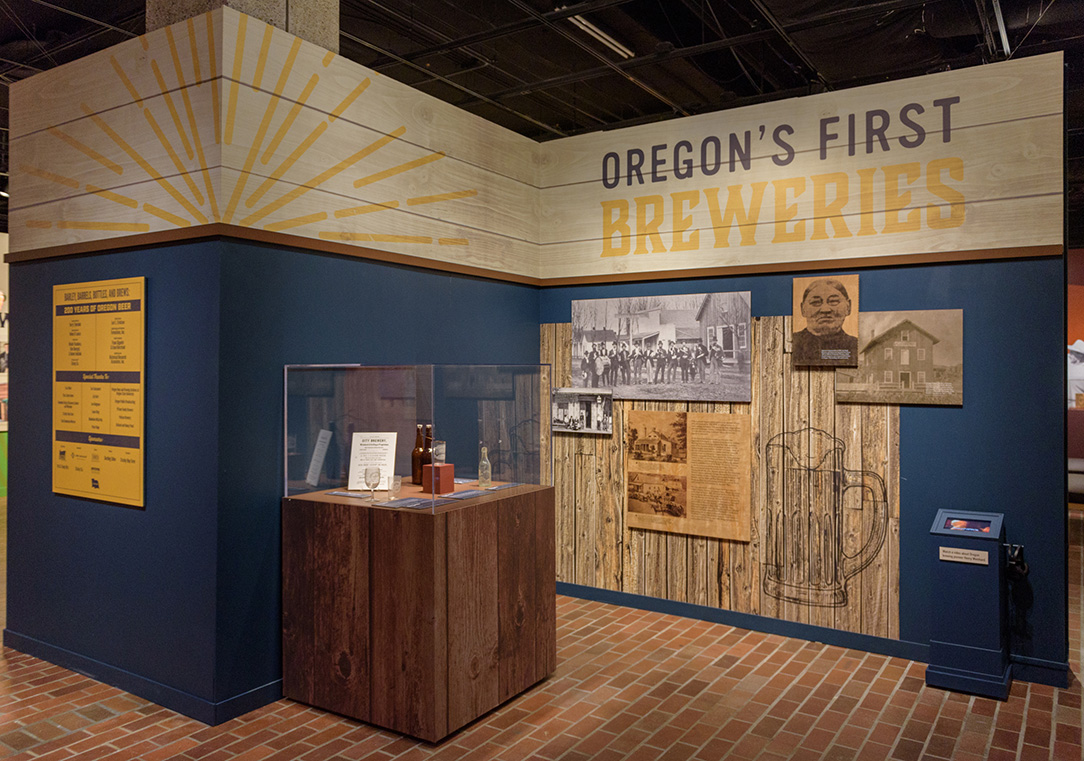 The exhibit highlights a number of Oregon’s earliest breweries, including Henry Saxer’s Liberty Brewery in Portland, which became the second brewery in the West when it opened in 1852.

In 1805, Meriwether Lewis and William Clark camped near the present day John Day River during the Lewis and Clark Expedition. John Collins, a member of the Corps of Discovery, brewed beer by fermenting bread made from the local camas root. The group thought that the beer was “verry good,” but that observation should probably be taken with a grain of salt, since it was the first they had consumed in several months.

The exhibit story continues from there, featuring a number of Oregon’s earliest breweries such as Henry Saxer’s Liberty Brewery in Portland and topics including the American beer boom in the 1890s, breweries closing during Prohibition, changes in hop agriculture, and the rise of craft beer.

One of my favorite objects in the exhibit is a glass carboy used for fermenting. Pioneers brought it in a wagon to Oregon Country by way of the Oregon Trail in about 1850. How they managed to get it here without breaking and why they chose to bring this large fragile object instead of other heirlooms remains a mystery! 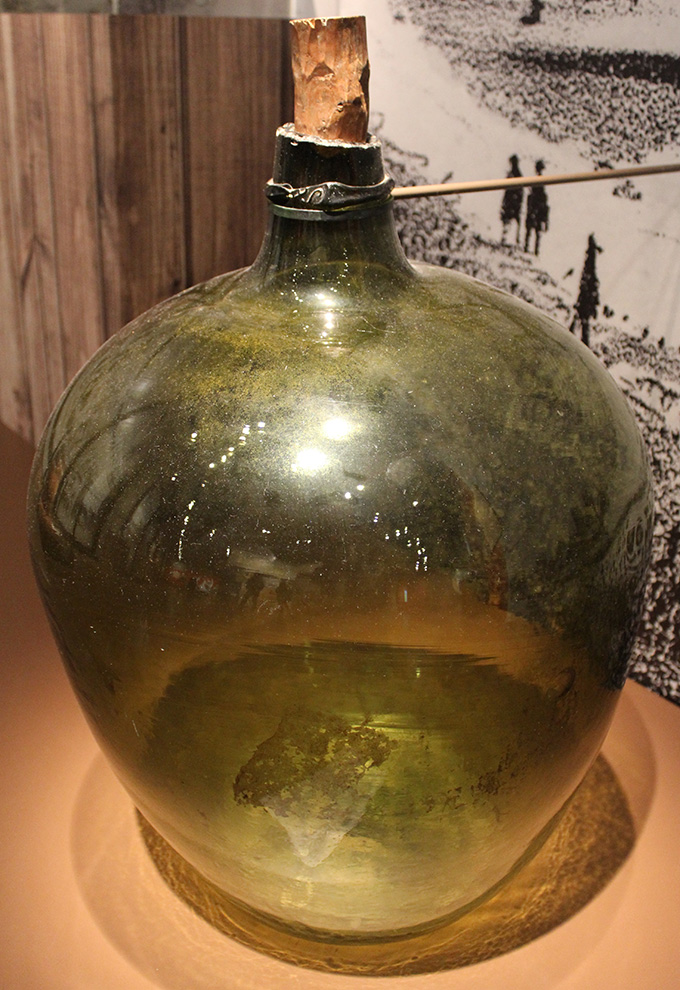 This glass carboy traveled in a wagon across the Oregon Trail around 1850 and survived without a crack. Come see it up close in “Barley, Barrels, Bottles, & Brews.” 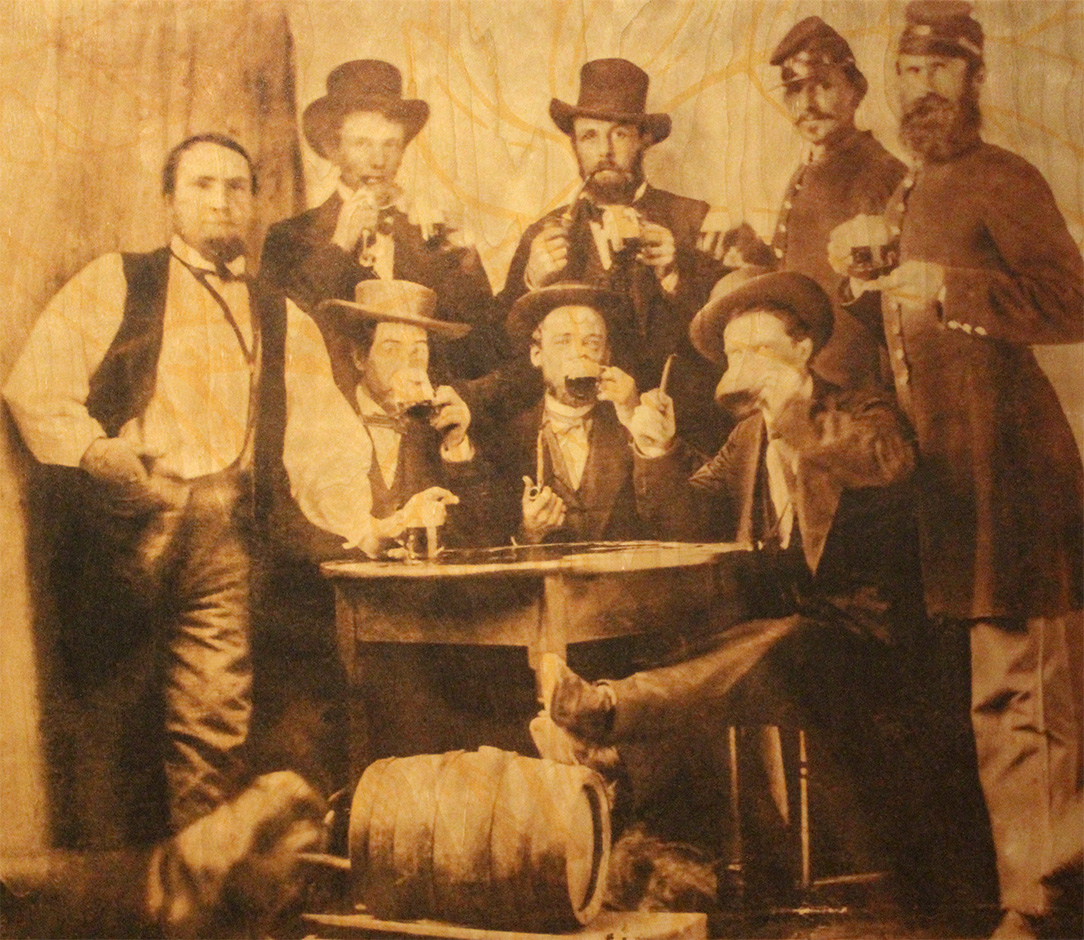 This image shows Civil War soldiers  in Jacksonville, Oregon, in 1863. It is unique in that it may be the earliest image from Oregon showing people drinking beer.

Many interesting stories came to light while researching the exhibit. In a Civil War-era photograph taken in Jacksonville, Oregon, in 1863 — likely one of the earliest in Oregon showing people consuming beer — visitors may note the dark color of the beer. Brewers developed pale lagers in Czechoslovakia during the 1840s, but the style took some time to spread to other places. Dark beer was pretty much the only type that people consumed in nineteenth-century Oregon.

I also learned more about Erickson’s Saloon, a nationally known establishment in Portland that was popular during the late nineteenth century. It filled an entire city block bounded by Northwest 2nd and 3rd avenues and Burnside and Couch streets. For the cost of a nickel beer, patrons would enjoy a free lunch and all-day entertainment. The saloon owner, August Erickson (no relation, sadly), was quite dedicated to his profession, as shown in a photograph of him serving drinks in a boat outside the saloon until the waters of the 1894 Portland flood receded. 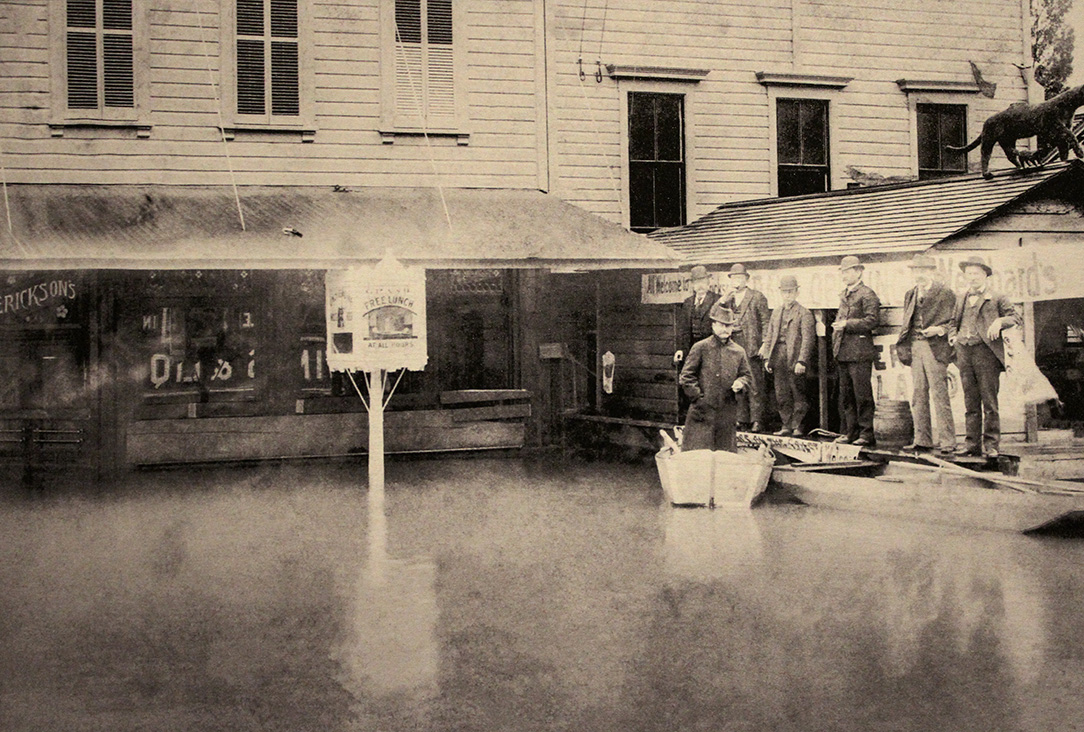 Not letting a flood get in the way of serving beverages, August Erickson and staff serve drinks from a boat outside his business, Erickson’s Saloon, during the historic 1894 flood.

In 1916, Prohibition marked an end to the early years of brewing in Oregon. While the law prohibited making, drinking, and selling alcohol, it was not illegal to sell raw materials for making alcohol. Many people secretly made liquor, beer, and wine in their homes. F.H. Steinbart, a home brewing company, opened in Portland two years after Prohibition began and sold malt syrups, hops, and other materials to make home brewed beer. After Prohibition ended, home brewing remained illegal under federal law until President Jimmy Carter passed legislation legalizing it in 1978. Today, F.H. Steinbart continues to thrive as the oldest home brewing business in the country. 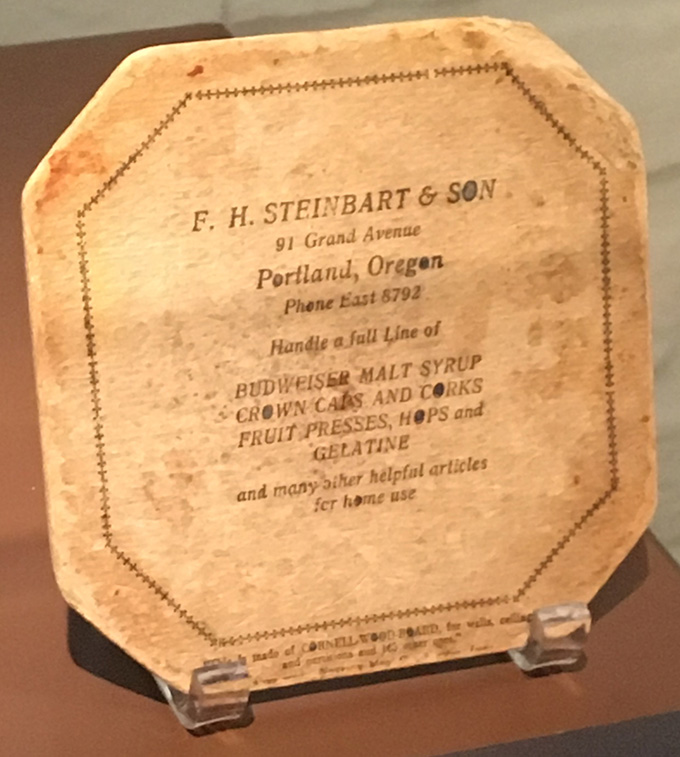 F.H. Steinbart opened in 1918 (they recently celebrated their 100th anniversary!) and sold supplies for making beer, wine, and cider at home.

Developing and producing large history exhibits like this one takes time and help from many talented and knowledgeable individuals. Working with hop historian Peter Kopp, archivist Tiah Edmundson-Morton of the OHBA, public historian Morgen Young, and a team of OHS staff, I curated an exhibit that profiles moments in history that have made Oregon the innovative center of craft brewing and hop agriculture that it is today.

There’s something for everyone in the exhibit, including a digital interactive that allows visitors to adjust different beer characteristics (such as bitterness, aroma, and color) to find their ideal style of beer. There is also a section where visitors can test their sense of smell by detecting aromas in six hop varieties that were developed in Oregon as well as videos sharing stories of brewing innovators. 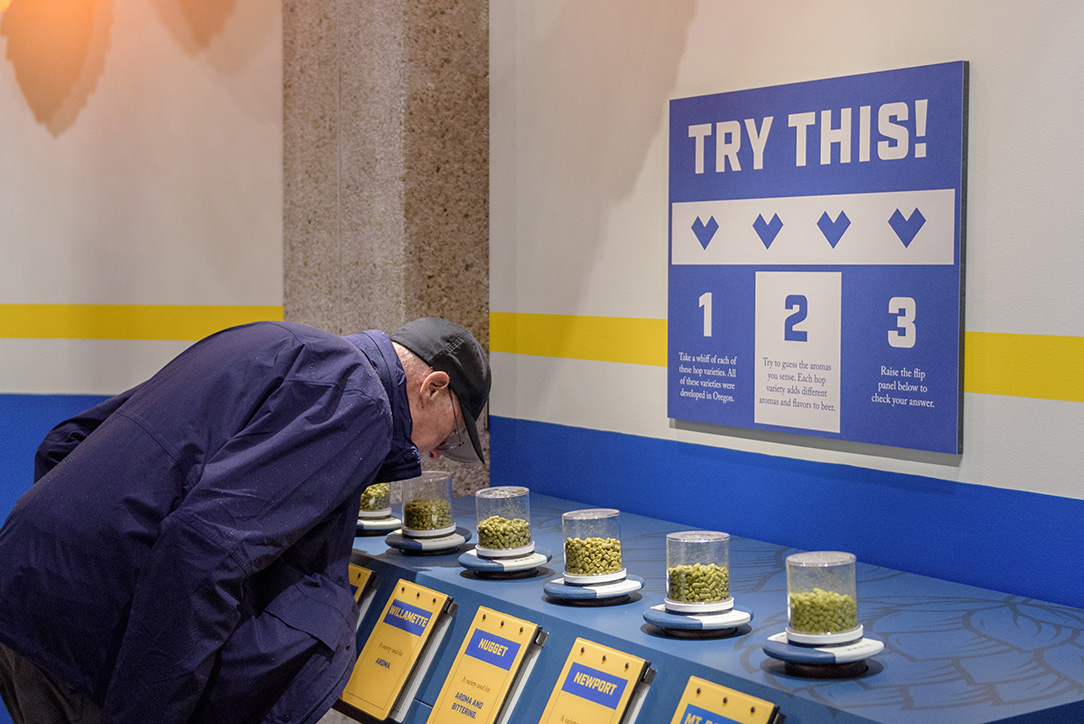 Try to identify the various aromas in several Oregon-bred hop varieties at an interactive scent station.

The exhibit is on display through June 9, 2019, at the Oregon Historical Society. I encourage you to come and learn the fascinating history of brewing and hop growing in Oregon and to see the connections between the past and present — we’ve come full circle to a time when most cities and large towns in Oregon again have a local brewery, just as they did in the nineteenth century. Cheers!