Charles B. Maxey is pictured here with his family in an undated photograph. Maxey moved to Portland, Oregon, in 1943, and was one of only two Black delegates to the 1949 Young Republican Convention in Salt Lake City, Utah. OHS Research Library, OrHi 91070

Today we’re unearthing a story from Charles B. Maxey, a native of Texas, who came to Portland, Oregon, in 1943. When he first registered to vote in Texas, he was told that the only option was to register as a Democrat. As soon as he was able to register as a Republican in Oregon, he did so, and remained a Republican the rest of his life.

The following excerpt (that we lightly edited for clarity) is tale Maxey told during a 1994 interview conducted by Jim Strassmaier (SR 4001, Tape 12, Sides 1 and 2). In the interview, Maxey describes his experience as one of only two Black delegates to the 1949 Young Republican Convention in Salt Lake City, Utah. 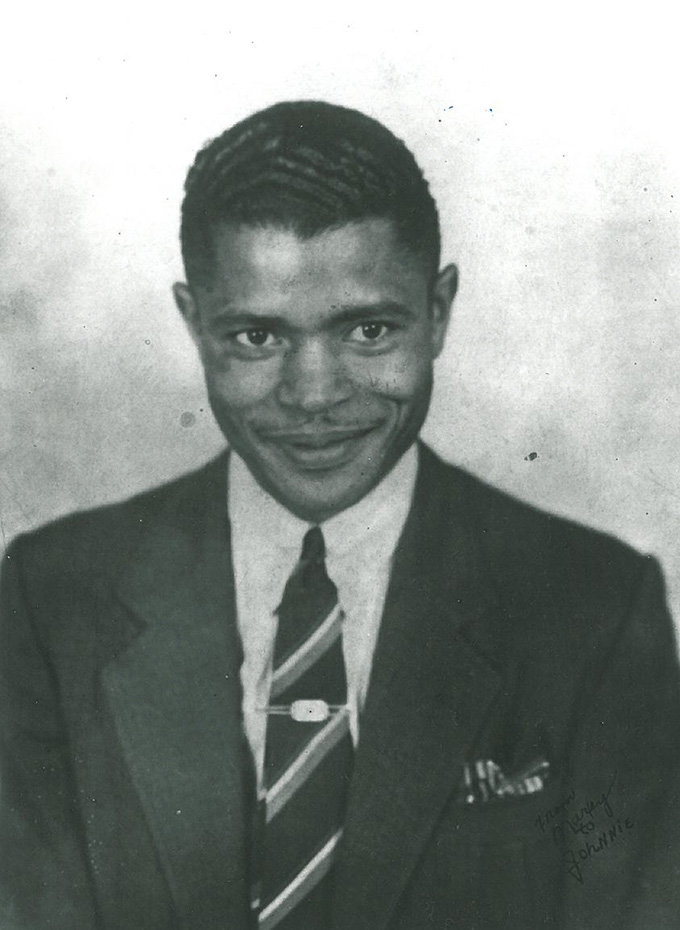 At the 1949 Young Republican Convention, Charles Maxey was denied a room at the hotel where delegates were registered. He stayed instead with a Black family nearby. OHS Research Library, OrHi 91072

Maxey: We got to Salt Lake City…in the afternoon. And I was driving the car; and in getting the luggage out, the porter there at the hotel…came out and he said, “Hey, why don’t you assist me in this luggage here.” And so, we unload the luggage and carried it out. And it just so happened I had some on my shoulder, and so I was first in front for the other people who came in the car with me and I walked to the counter and I said: “Yes, I’d like the reservation for Charles Maxey.”

They said, “What group?”

I said…“I’m a delegate from the state of Oregon.”

“Are they with you?”

So, they looked around reservation, and he said, “We don’t have a reservation for you.”

So, at that time Bob Elliot’s wife [Thelma Elliot] walked up and she said, “What’s happening, Maxey?”

I said, “They said they don’t have a reservation for me.”

So, she said, “Well, look in the Oregon delegation and I’m sure you’ll find it.” So, Bob came walked up about that time and he also made known the fact, yes, my name was there, so they found it.

So, the clerk said, “Well, there’s a problem. And the problem is we do not house any Blacks in this hotel.”

[Bob] said, “Well, I’m not concerned about housing any Blacks. It’s a matter of this is Oregon’s delegation and this man happens to be a delegate. He’s not a worker; he’s a delegate.”

So, argument ensued and all the people from different other places, states, were coming in, but we held the whole thing up and wouldn’t let anybody come in until they seen after us. And most of the people just started piling their stuff in the lobby and all. So, it was creating a scene like, and tempers began to get a little warm from one group to another. And it got down to the point to where…[someone] made the comment that we should make known that none of the Oregon delegation would register until we get this straight.

And also, what had happened at that time, Vivian [McMurtrey] summoned the convention committee at that time, some of the heads, and got together with them…[and] they wanted to know what was it they thought they could do, and they insisted on me being in on the meeting at that time. So, we just used a part of the lobby and had a say; and mine was that I would like to stay — no, I wouldn’t like to go back. I wouldn’t like to just get a room [elsewhere] and stay here and wait until this is over and go back with you.… I insisted on being there and taking part [in the convention].

Each time they got my opinion: “Well how do you feel? Would you still consider staying here…? — and they told me this, and had said this right to my face, that if you can’t receive all types of accommodations…then Oregon group will go home. We’d rather go home than to be humiliated with the fact that a segment of our group has been turned down for accommodations.… [Thelma Elliot] suggested: “If we have to go through all this, I just think the state of Oregon should go on record as saying that we won’t take part.” And I told them that I didn’t think that would help as much [as] if we stayed there and fight it out with something better than that.…

They asked me for a suggestion. “If you got a room now, even with them turning you down, would you stay?”

I said, “Sure, I’d be very happy to stay, but I would be very cautious of eating here.”  I ate at every banquet [but] I did not have my meals there. I did not. And that was because of my request that I would not eat there. I said I wouldn’t eat there. Now I don’t know what would have happened if I had said I wanted to eat there with the group. I’m almost sure with the way the delegation had discussed with me, they would have said, “Well fine. If you don’t eat, we won’t eat here….”

And this time, Mrs. Elliot kept saying, “Well, why don’t Oregon go home?” Just pull out and go home and let that publicity take care of itself.…

….And Sig [Unander said it] would it be possible that his car could be used for [my] transportation, [and], “Not only that, he can have the car as long as we’re here. He can use the car the whole time he’s here to go back and forth, if that’s what he desires.”

Somebody in the group…went downstairs and asked…one of the Blacks [that worked in the hotel] something about [me staying] in a Black home. And one of the fellows who worked there said that he had a room, that he’d be very happy if I stayed in his home. And that’s where I stayed.…

Next day. Oregon delegation, we carried this the next day. And it was my suggestion that I would stay if the Oregon delegation would stand behind me in saying that I would put a resolution on the floor asking that we do not use the accommodation of any place anymore, if our group, if any segment of the group is not accepted.… And they hashed that over and discussed that quite a bit and they decided that it probably would be better if some other person would introduce that. And I accepted the fact of that, but I did want to do it myself.

Strassmaier: Now you have discussed before, a discussion in the general conference where a woman got up, and I think you said she was from South Carolina, and she gave a speech which was a really, well, let’s say, reactionary speech, and let’s say it was a racist — sounds like it was a racist speech. What, again, did she actually say in that speech? Do you remember some of the phrases she used and what her message was?

Maxey: Not only in the speech. I heard in several speeches that people got up and made mention of the fact that they’d rather not be associated with Blacks. “It has worked before and I see no reason why it shouldn’t continue to work.” I mean those statements were made time and time again. But remembering the exact quotes, I don’t remember if I can come up with any.

[Thelma Elliot spoke later, and] was very emotional. In fact, she spoke in tears all the way. Because she was saying that she, too, was from Kentucky, and she had been familiar with the segregation and things of that sort. But when it got to the place where it seemed like it was going to be open mistreatment, inviting open mistreatment, that she didn’t want to be a part of…any party that sanctioned that. I remember her making the statement to that effect.…

Clay Myers…called for the resolution [on my behalf], stating…“I would like to make a resolution stating that the Republican Party will not hold meetings anyplace where any segment of any of their members have been refused accommodation.” That was the essence of what the resolution was.…

I did not give a speech on it.… I know in the [General Western] Caucus I made the second to the suggestion. And I think on the main floor, too.

Strassmaier: How did you feel when the measure passed?

Maxey: I don’t know if I felt that there should have been more discussion or whether it was just passed to get it over with. That’s how I felt. [Laughs] And I was wondering would there be a ways used to block it in other things that came up on the floor. Yeah, and that’s how I felt. I was wondering whether to feel jubilant about it. A lot of people cheered and went on, but, as I said, again.

Maxey: No. No, I didn’t, because of the fact that I felt deep down somewhere that a lot of people who probably — who had discussed this with me, who had probably felt the same way that, had a chance, they would have said openly. And there was some discussion that I’d had even with some of the Oregon delegation, that — well, for instance, in our regular meetings, “Well, you’re always pushing for civil rights. Don’t you think that you could get more done if each time you weren’t so pushy?” You know I had gotten this from the delegation, and I was wondering at that point in time, wasn’t there still some of the same feeling in some of the members of the Oregon delegation.

Strassmaier: Was anyone else jubilant? You weren’t able to be as jubilant as maybe you’d have like to have been.

Maxey: I think Oregon State group were.… [There was] applause and screams.

I really think this was a shock to the Oregon delegation themselves, to say, “Actually we did that. And without too much fanfare.” I think it is much more enjoyment they got out of believing that they themselves, at the spur of the moment it came up they acted instead of a lot of reaction. That, it might have been that if they had time to study it, many of them wouldn’t have probably been as vocal as they were about things. Or maybe if…that had been discussed after convention, probably been different.

But since it was head-on at the beginning of it, I think that was one of the best things [that] ever happened. Because I think if that had been brought to the floor two days after the convention started, I don’t think it’d been too much to take them about it. But I think to meet it head-on with here, it hadn’t even started, and if we don’t do it here, we’re not going to get a chance to do anything about it.

More of Maxey’s interview can be found online on OHS Digital Collections.

Copyright for this interview is held by the Oregon Historical Society. Use is allowed according to the following license: Creative Commons, BY-NC-SA: http://creativecommons.org/licenses/by-nc-sa/4.0/