The Afro-American Heritage Bicentennial Commemorative Quilt has been removed from public display in our pavilion following the vandalism of our building on October 11, 2020. We are grateful that police recovered the quilt a few blocks from the Oregon Historical Society on the morning of October 12, and though it was wet, the quilt is otherwise intact. However, there has been color bleed of the fabric due to moisture, which will require the attention of conservation specialists. While the quilt will not be able to return to public display for the remainder of Portland Textile Month, we invite community members to learn more about this important piece of local African American history through this blog post.

The textile dates to 1974, when Jeanette Gates formed a group of fifteen women to sew a quilt honoring the heritage and contributions of the Black community in U.S. history, along with co-chairs Mildred Reynolds and Hazel Whitlow. Gates and other Black women from Portland worked over the following two years, to coincide with the United States Bicentennial in 1976, to create a quilt of thirty fabric squares honoring prominent individuals or moments in history. The quilt then traveled around the country and was eventually exhibited at and donated to the Oregon Historical Society. Readers can learn more about the quilt’s history on the Stitching History: The Afro-American Heritage Bicentennial Commemorative Quilt exhibit web page.

Since its creation, this quilt has remained in high demand for display. Immediately after the quilt was first shown at OHS in 1976, it went on tour, being exhibited at the U.S. Department of State, the Smithsonian, and the W.E.B. DuBois Institute at Harvard University. When it returned to OHS in 1979, the quilt was displayed again to coincide with the Rose Festival that year.

The quilt was featured in the Political and Campaign Quilt Show at the Kentucky History Museum in 1984. In 1989, the quilt went on national tour again as an integral part of the exhibit Stitching Memories: African-American Story Quilts, developed by William College Museum of Art in Williamstown, Massachusetts. This exhibit, highlighting narrative quilting in the African American tradition, traveled to New York, California, Maryland, North Carolina, Ohio, Tennessee, and back to New York, reaching audiences from coast to coast. 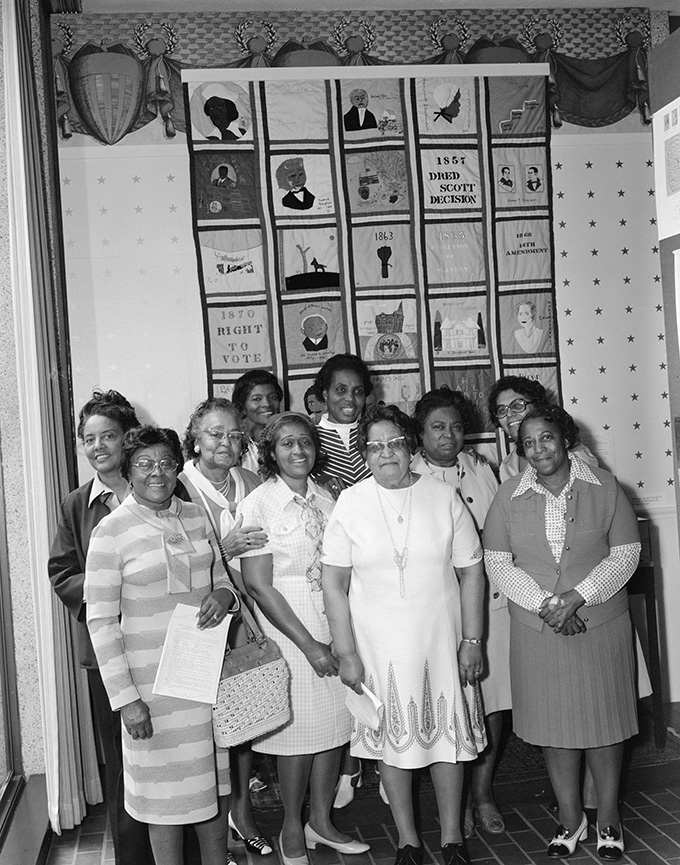 In 2000, the quilt was featured in an exhibition at Washington State University entitled Quilts: Stitched Records of Human Experience, curated by noted quilt historian Mary Bywater Cross. Cross will appear as part of the panel presented by Portland Textile Month and OHS, along with Sylvia Gates Carlisle and historian Dr. Carmen Thompson, to tell the story of the Afro-American Heritage Bicentennial Commemorative Quilt on Thursday, October 15, 2020, from 12pm to 1pm. You can register here to attend the virtual panel.

One of the Oregon Historical Society’s many quilts is shown here packed in a long archival box with tissue padding the folds.

Textiles are particularly vulnerable to damage, and balancing object care with display and education is paramount. Exhibiting the Afro-American Heritage Bicentennial Commemorative Quilt exposes the quilt to dangers such as improper handling, incorrect temperature and humidity, security concerns, and light damage. OHS policies are in place to ensure that institutions that borrow objects for exhibit demonstrate their ability to safeguard the objects and mitigate the potential for damage. Requirements for borrowing institutions include: specialized handling; restrictions on exhibition time; security; insurance; and providing acceptable light, temperature, and humidity levels. Borrowing museums also complete condition reports for the quilt as it arrives and departs.

We can track, though the various condition reports submitted over time, minor changes in the stability of the quilt as it traveled throughout the United States. Despite all handling precautions, the lettering on one of the panels started to noticeably fray in 1990 and was stabilized by conservators at the Baltimore Art Museum with OHS staff permission. The balance between preservation of objects and access to those objects is a constant consideration for all museums.

When the quilt is home at OHS, we endeavor to store it in a manner that will best preserve it for the future. In 1976, just before this quilt was donated, the entire OHS quilt collection was assessed, sorted, and prepared for permanent storage by volunteers from the Northwest Quilters group. Most of the large quilt collection at OHS has been stored rolled for many years; we are now reassessing quilts on a case-by-case basis and determining that some are better stored in long archival boxes with tissue padding at the folds. The Afro-American Heritage Bicentennial Commemorative Quilt falls into that category, as some of the quilt blocks are quite textural, and some are almost three-dimensional, such as block #27, which depicts Leontyne Price wearing a mohair wrap. When the quilt comes off exhibit at the end of Portland Textile Month, it will be carefully padded, folded, and boxed in a lignin-free textile box, and stored in our climate-controlled warehouse, safely preserved for the next time that it is needed. 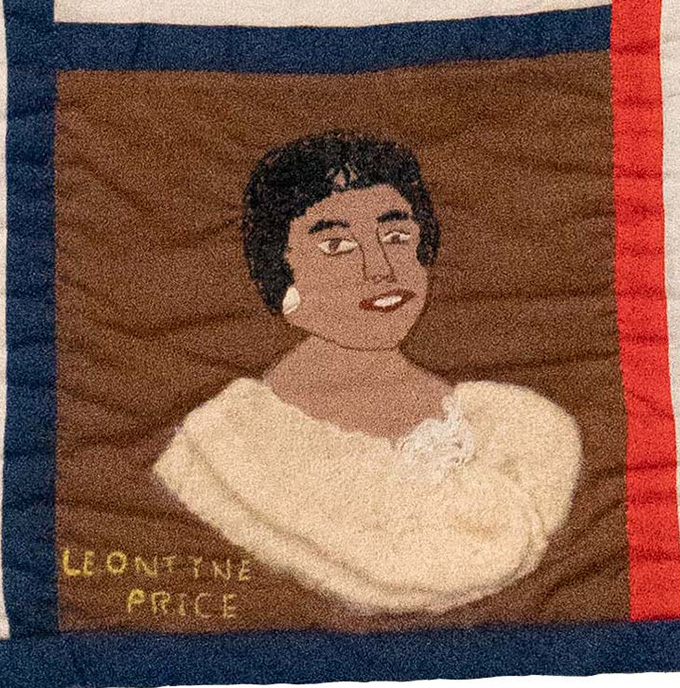 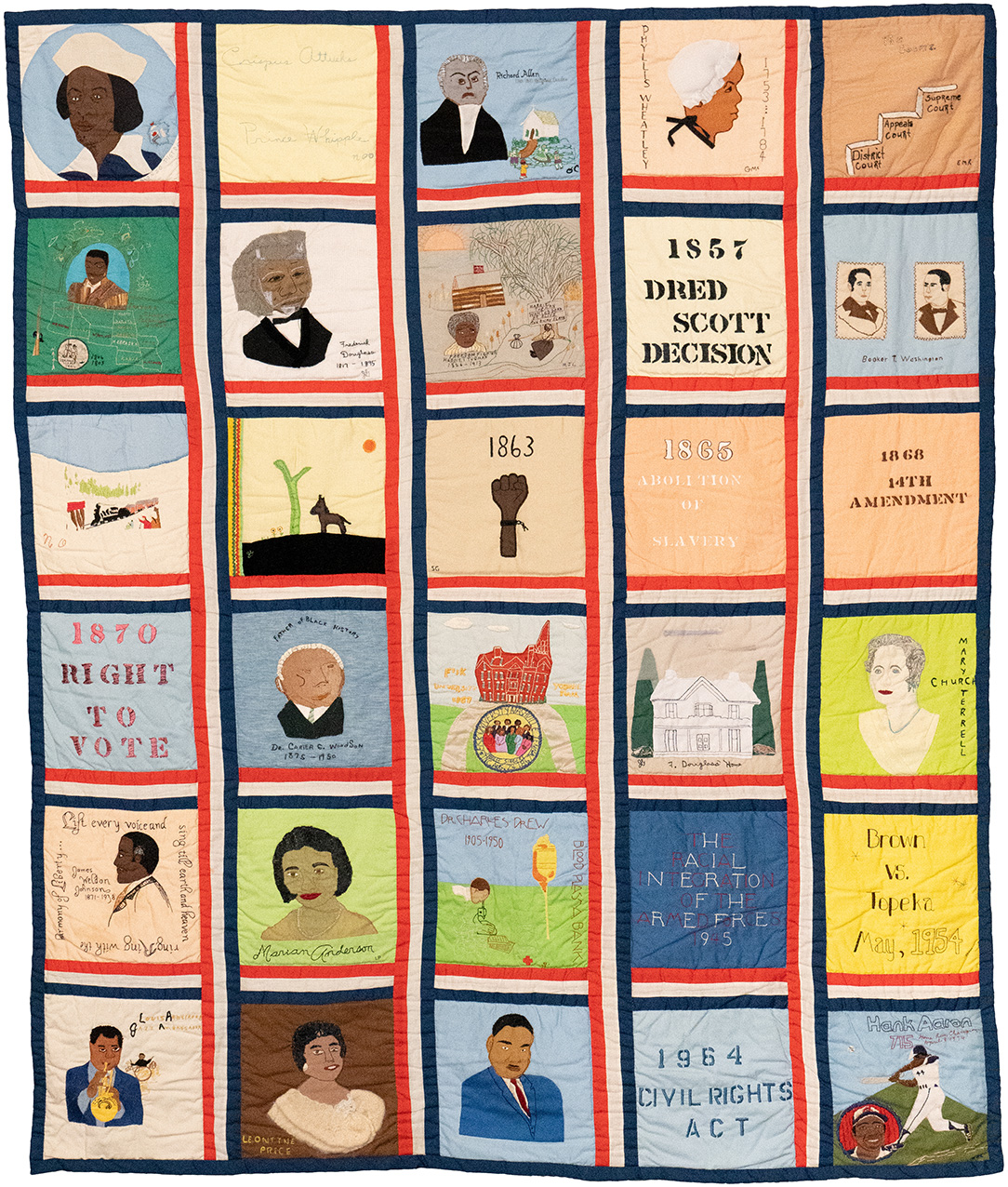 The Afro-American Heritage Bicentennial Commemorative Quilt will be on view in the pavilion of the Oregon Historical Society from October 1 to November 2, 2020, in collaboration with Portland Textile Month. Portland Textile Month “aims to galvanize the local textile community for a month-long festival of events centered around knowledge-sharing and cross-pollination between enthusiasts, artists, businesses, and institutions. They provide an open platform to engage and share ideas, histories, knowledge, experiences, and practices across myriad cultures, viewpoints, and generations.” Portland Textile Month is focusing on the theme of “repair & reuse” for their third annual festival, prioritizing diversity and inclusion. 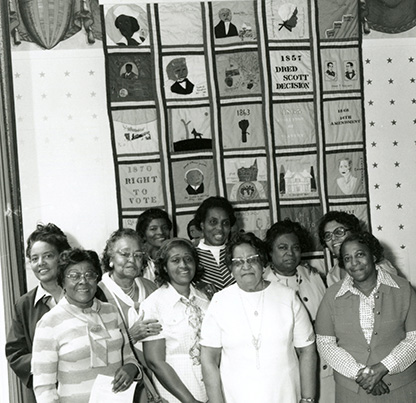 A panel discussion on the significance of the Afro-American Heritage Bicentennial Commemorative Quilt and 15 women who made it.