In December 2021, the Oregon Historical Society (OHS) opened an original exhibition, Freeze the Day! A History of Winter Sports in Oregon. Whether engaging in leisure activities on the weekends or competing in professional athletic events, Oregonians have long enjoyed experiences shaped by snow and ice. Freeze the Day! celebrates this history and illustrates the emotional draw of winter sports — the magic, awe, thrill, and camaraderie Oregonians have enjoyed for generations — through objects and images, including a number of images captured by photographer Ray Atkeson.

For Freeze the Day!, the museum services team sourced many images from the extensive photograph collection in OHS’s research library, and as with many exhibits, we also acquired images from other archives. OHS worked with local design firm Upswell to create Freeze the Day!, and while conducting image research, their lead designer discovered The Ray Atkeson Image Archive. It was immediately clear that this amazing collection of ski and snow photographs would not only illustrate Oregon’s winter sports history but also capture the wonder that is the Cascade Range covered in blankets of snow. The collection is extensive; Atkeson photographed Oregon and the Pacific Northwest for more than 60 years! 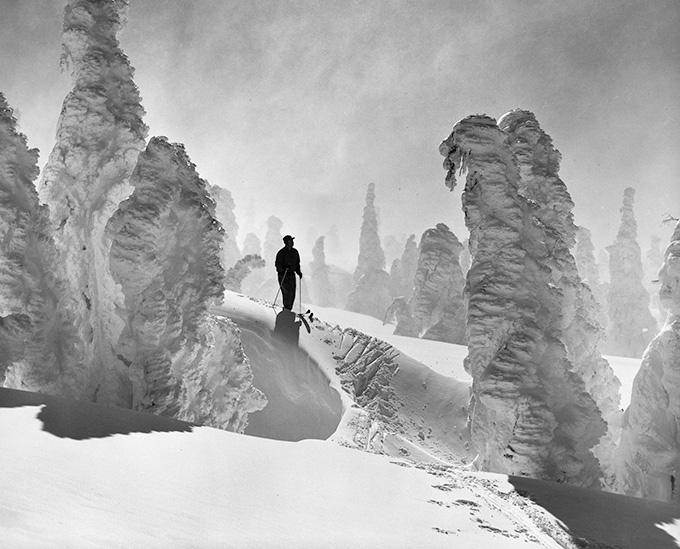 Ray Atkeson skis in a snowy landscape. His wife, Mira Atkeson, took the photograph and often accompanied him on photography trips. Image Courtesy of The Ray Atkeson Image Archive, 7430.

Atkeson’s photography is timeless — capturing nature, industry, winter sports, and everyday life in the Pacific Northwest — and perfectly depicts the beauty of the many winter sports highlighted in the exhibit. A self-taught photographer, he started with a Brownie box camera and worked through the introduction of color photographs in the 1970s and 1980s. In a 1978 oral history interview held in OHS’s research library, Atkeson said of his photography:

I think maybe I developed a better perception of what would make a good picture over the years. I didn’t have any more natural talent than anyone else, but I have worked harder at it than most people do, and I’ve learned an awful lot and continue to learn and continue to make mistakes. I don’t think I’ll ever get past the point of making mistakes. When you quit learning, I think it is time to quit doing whatever you’re doing.

Ray Atkeson was born on a farm in Illinois in 1907. Growing up, he held various jobs in numerous states, including harvesting wheat in the Midwest, picking apples in Hood River, working as a janitor in Kansas, selling magazines on the West Coast, and working at Montgomery Ward in Northwest Portland. Atkeson became interested in photography by accident when at age 15 he set up a Brownie box camera on a timed exposure and forgot about it for an hour. The photograph, a nighttime scene of a snowy Union Station in Kansas, won a prize in the local newspaper, the Kansas City Star, as well as in the Mid-Week Pictorial, a magazine published by the New York Times. The Illustrated London News eventually purchased the image. After this success, Atkeson upgraded from a Brownie camera to a folding camera and started looking for a job as a photographer. 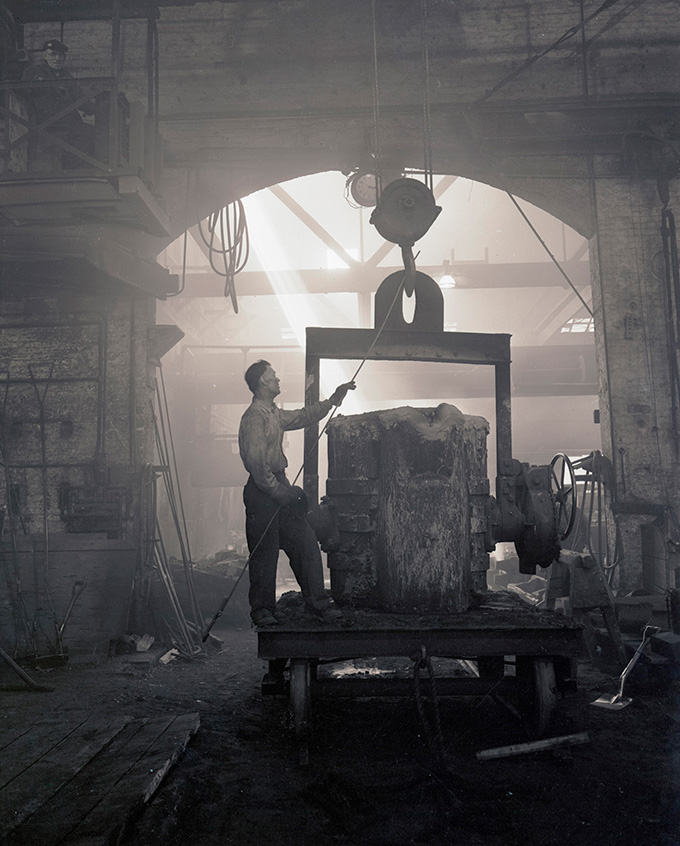 Atkeson was an avid skier and loved the outdoors. In the 1930s, he met ski champion and inventor of the Saf-Ski quick release ski binding, Hjalmar Hvam, and became immersed in the world of snow-sport photography. Akteson snapped photographs of famous skiers such as Hvam, Hermond Bakke, Olaf Rodegard, and Sverre Engen, and he soon became one of the premier ski and snow photographers in the Pacific Northwest.

In the late 1940s, Atkeson left his position at the Photo Art Commercial Studio and worked full time as a freelance photographer, taking photographs for prominent clients that included Eastman Kodak, General Motors, and National Geographic. Although he took many commercial photographs, Atkeson was most interested in nature and outdoor photography and wanted to highlight Oregon’s beauty. Beginning in the 1960s, he published more than a dozen coffee table books of his photographs, including Ski and Snow Country: The Golden Years of Skiing in the West, 1930s–1950s, Northwest Heritage: The Cascade Range, and Oregon Coast.

In 1987, Atkeson was named Oregon’s Photographer Laureate for his work capturing the Oregon landscape. His other honors include the Oregon Governor’s Art Award, the Governor Tom McCall Award, and an honorary doctorate of fine arts at Linfield College. Atkeson passed away in May 1990, but his photographic legacy lives on in The Ray Atkeson Image Archive, managed by his stepson, Rick Schafer, who is also a photographer.

When OHS’s museum services team reached out to Schafer to inquire about featuring some of Atkeson’s images in the exhibit, he invited me and a few folks from the Upswell team to look through a portion of the archive stored at his home. Schafer donated most of the collection — more than a quarter of a million images — to the University of Oregon Libraries Special Collections and University Archives in 2018. While looking through Atkeson’s photographs at Schafer’s home, I got to see firsthand the broad range of work he produced over his long career. I invite you to visit the Freeze the Day! exhibit, which is on display at the Oregon Historical Society through July 17, 2022, to see Atkeson’s amazing images up close or enjoy some of my favorites in the slideshow below. 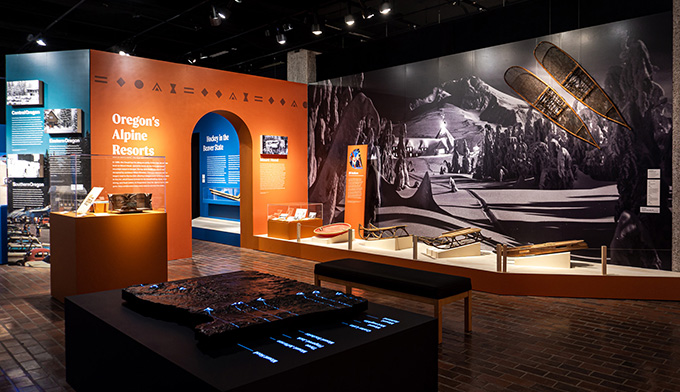 Ray Atkeson’s 1945 image of Timberline Lodge at night is featured as a large mural in OHS’s exhibition, “Freeze the Day!” Photograph by Evan Kierstead.

Ray Atkeson captures an image of a skier flying off of a snow cornice in this February 1951 image.

Ray Atkeson holds his camera while sprinkled with snow on Mount Hood in May 1931.

In August 1931, Ray Atkeson stands on Elliot Glacier with his camera. 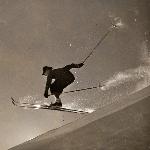 Skier Bob Donaldson of the Cascade Ski Club and Mazamas Ski Club flies through the air off the rim of a snow cornice in 1937.

In 1939, Ray Atkeson captured this photograph of ski instructor Otto Lang performing a difficult jump-turn on the rim of the Skibowl with Mt. Hood in the background. OHS Research Library, 012154.

Ray Atkeson captured a group of people on skis in this undated photograph.

Courtesy of The Ray Atkeson Image Archive, 2520A.

Courtesy of The Ray Atkeson Image Archive, 5882A.

Ray Atkeson captured the snow as it fell in the forest in this undated photo.

Courtesy of The Ray Atkeson Image Archive, 7091B.

Courtesy of The Ray Atkeson Image Archive, 7858A

Categories: Behind the ScenesAudience(s): Researchers, Visitors