Home Blog Can She Run a Boiler? Misogyny in the Archives

The 1970-1971 AFL-CIO Oregon Executive Board included only one female member, Nellie Fox-Edwards. Laurie Mercier’s article in the Spring 2019 issue of the “Oregon Historical Quarterly” proves the significant presence of women in Oregon’s labor history — and the lack of photographic evidence to document their work. Credit: OHS Research Library, MSS 2768, box 2.

In 1976, historian Laurel Thatcher Ulrich penned the now-famous line, “Well-behaved women seldom make history.” She was writing in reference to women who appeared in the record of seventeenth century New England ministerial literature, and the women she studied had been that rare exception. Ulrich, looking at over 50 eulogies written for New England Puritan women, asked the question: what makes a woman memorable?

The question of memorability was raised in my own work as the Rose Tucker Editorial Fellow for the Oregon Historical Quarterly (OHQ) earlier this year, when I conducted photo research and fact checking for an article on Oregon labor feminism by historian Laurie Mercier. My search for images to accompany the article took me deeper into the OHS Research Library archives than I’d ever gone before, and yet instead of finding photos, I found myself hitting wall after wall. Mercier’s article, “Breadwinning, Equity, and Solidarity: Labor Feminism in Oregon, 1945–1970,” available this week in the Spring 2019 issue of OHQ, definitively proved the significant presence of women in Oregon’s labor movements in the mid-twentieth century. So where was the photographic evidence?

The simple answer is, it doesn’t exist. Many of the photos taken (and later saved) are of formal occasions or board meetings, when the people in charge were all there. The people in charge, in this particular instance, included so few women that they could often be counted on a single finger. Women and their work showed up in the record again and again — in newspaper articles, annual conference proceeding notes, and oral histories — but rarely with the same accolades or narratives that called for a photo. Even titled women such as Mildred Ripley Gianini, the first female vice-president of the Oregon Federation of Labor, were reduced to single portrait photographs.

It was difficult to reconcile the vibrant women Mercier’s research brought back into the historical conversation with their near-complete absence from the archival photographic record. I found myself appreciating the article much more, having gone through a considerable amount of Mercier’s primary source documentation at OHS, knowing how much careful reading and piecing together she employed to establish the active and impactful presence of women in Oregon’s labor movement. Despite the OHS Research Library’s extensive collections from the Oregon AFL and Oregon labor leaders such as Nellie Fox-Edwards, after a month of searching I found only a handful of pictures of labor women. Even Fox-Edwards’ own photos often mirrored the photos of the male labor leaders: pictures of her with famous or important individuals. Take Fox-Edwards out of the room, and there were seemingly no famous or important women to photograph at all.

Photographs of women in the labor movement following World War II were taken in formal settings where mostly men were present. Mildred Gianini is pictured here in a June 9, 1950, “Oregon Labor Press” article, one of just a couple we located for this article. Gianini helped organize Local 107, one of the first Laundry Workers’ International Union bargaining units in the country. Credit: Courtesy of “NW Labor Press.”

Where photographs of women were absent, a multitude of misogynistic letters to and about women abounded. The papers of Oregon Representative Edith Green had folders of carefully filed letters from constituents in support or opposition to bills she sponsored, such as the Equal Pay Act. One letter from a Portland resident, dated July 21, 1963, began: “Mrs. Green, I do not care for the aggressive, feministic spirit which you display or the trending attitude toward feministic domination in our nation.” Another 1963 letter, from the then-Vice President of the North Pacific Lumber Company, observed that women had higher rates of absenteeism, were less interested in becoming career workers, and were often unable to attend regular meetings that the company scheduled outside of “normal business hours” because of their domestic obligations. The letter writer would not claim that women were unequal to men, but simply wanted his opinion noted that “a human being should be judged on his merit.” Green’s reply to the writer showed remarkable patience, but her emphatically scribbled note on the letter (“A bit contradictory!”) betrayed that she read it and had been frustrated, just as I was, 56 years later.

“A bit contradictory! If this is logical then [you are] maintaining a low wage scale so they will stay home!” —Edith Green, April 1963 notes on letter from Pacific North Lumber Company arguing for unequal pay for women 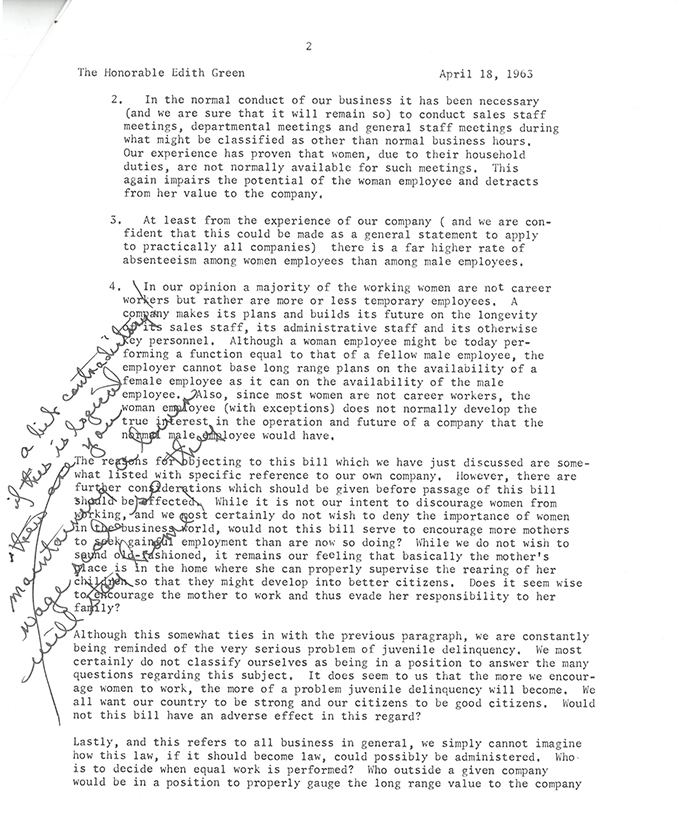 Six years after Green wrote that “the record is replete with instances of wage discrimination against [women],” an article in the Oregonian covered a job discrimination committee hearing. It recorded the testimony of one John Brown who “reported he is confident that there is some discrimination against women, particularly in the custodial field, but [he said], ‘we need to know some things. What can a woman do? Can she run a boiler?’”

What can a woman do? Can a woman run a boiler?  Can a woman organize in the workplace? Can a woman serve as an executive in a labor union? Like Edith Green, I find myself exasperatedly citing “volumes of testimony” proving that yes, a woman can do these things.

But I don’t know if I could find you many pictures of it. 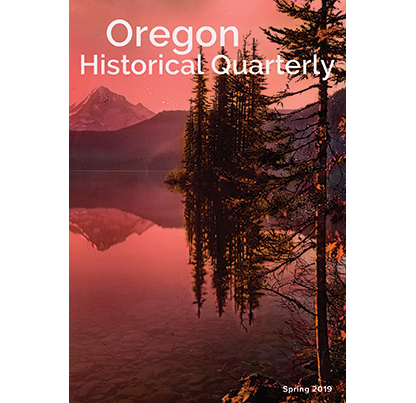 In the Spring 2019 issue of the Oregon Historical Quarterly, authors explore working-class women in the post-WWII labor movement in the Pacific Northwest, the development of the Oregon Skyline Trail and changing attitudes toward nature tourism, the slavery debate in the  Oregon Constitution and editing by cut and paste, and life at the work camp of the Cape Creek Bridge construction site in Lane County, Oregon.