Home Blog C is for Census

Are you asking yourself why you are getting notices to fill out a census form online — and why you are legally required to do so? Is this really a priority right now? What exactly is a census, anyway?

To understand its history and satisfy my own curiosity, I spent some time researching the U.S. Federal Census and would like to offer a few tidbits about why it is so important and interesting for individuals — and for Oregon. The word “census” comes to from the Latin word censere, or to assess. Its Roman application denoted a registration of citizens, but not a count of all individuals. Women and slaves, for example, were at times not included.

Similarly, the young United States government set a tone of exclusion in its 1790 Census Act, focusing its attention on free, male inhabitants — specifically excluding “Indians not taxed.” The U.S. government omitted Native people from federal censuses until 1860 and it was not until 1900 that they were counted on reservations as well as in general populations.

Thomas Jefferson, in his capacity as Secretary of State, was responsible for the wording and administration of the United States’ first census. His original intent is evident in the 1790 Census — showing that a census should include more than just a simple count of individual inhabitants. While the focus of the 1790 census was undeniably a population count, Jefferson called for more detail in its further delineation of the population by gender and ownership status. This basic premise is a common thread, woven through each of our 24 federal censuses. By the 1840 census, the original six questions had expanded to seventy, and the American Statistical Association (formed in 1839) led efforts to reform census procedures. It has been a driving force behind the advocacy for increasingly detailed questions on each new census. 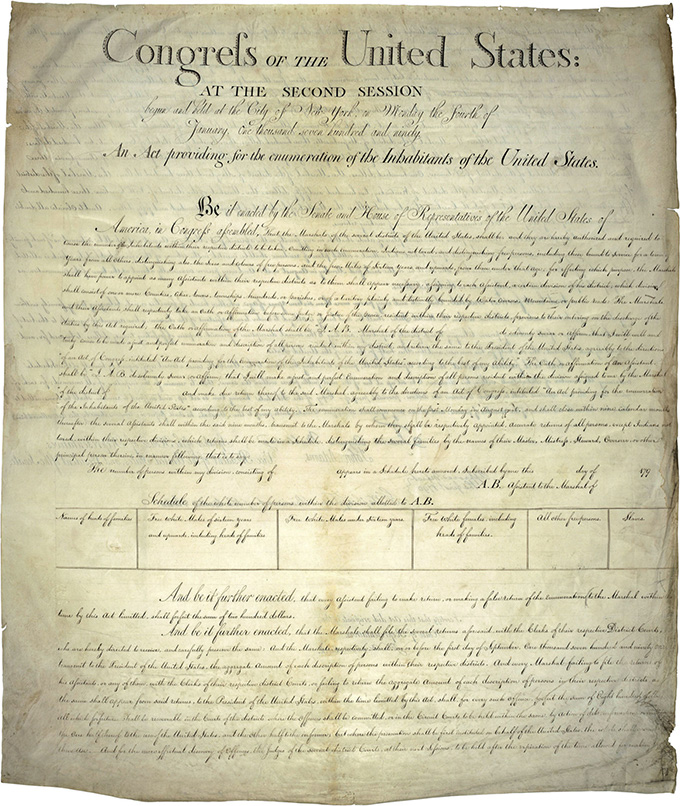 Your answers to these questions form the basis for federal funding of hundreds of programs nationwide. More than $675 billion were allocated to these programs during the 2015 fiscal year alone. For a complete listing of programs and more detailed information, see Uses of Census Bureau Data (PDF).

So, is federal fund allocation the sole purpose of the census? No! Of arguably greater importance, depending on your views, is its role in determining our representation in Congress. Population count is analyzed by location, thereby predicting how many representatives each state will have. Consequently, rural, sparsely-populated districts have fewer representatives than larger metropolitan areas. If the majority of a very rural district failed to complete its census, for example, that state would be obligated to change its district boundaries and could, conceivably, lose representation in Washington, D.C. If you want your voice to be heard, it must first be counted! 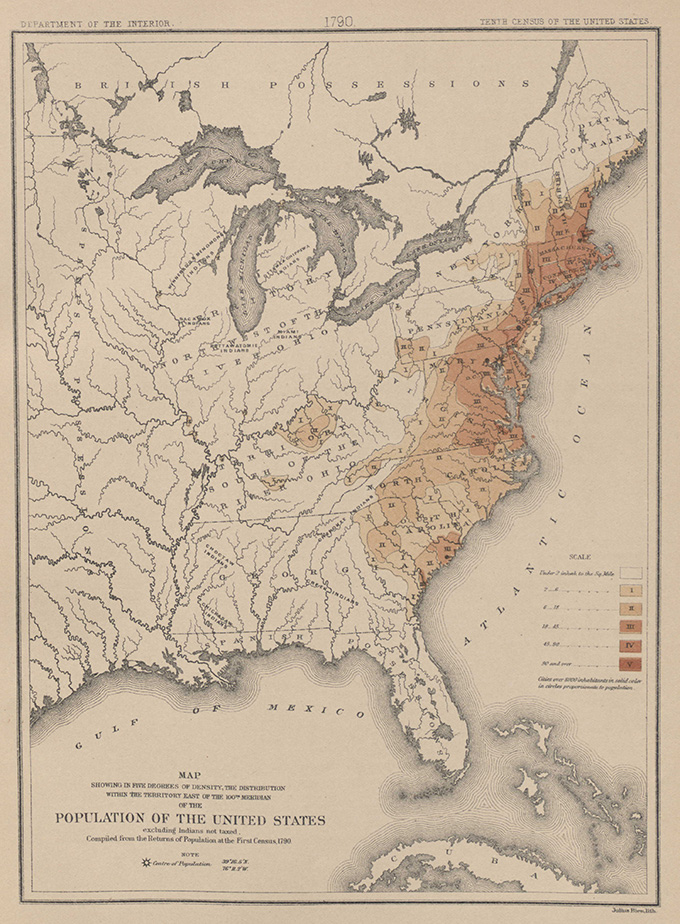 This 1790 map produced by the U.S. Census bureau illustrates population density in the United States based on information compiled from census records. Of note is that Native populations are absent from these population counts, as stipulated in the March 1, 1790, census act.

States remain outside the census process until the federal government instructs them to review census population schedules every ten years and inspect congressional district boundaries for accuracy. This year, according to preliminary population estimates, Oregon may gain its sixth congressional seat after the 2020 Census is tallied.

While all of these census forms have great import for the way our country functions, they are also invaluable to many types of researchers. The U.S. Census Bureau releases its original census images in viewable format to the National Archives and Records Administration for storage and access after a period of 72 years. Before that time, the Census Bureau is prohibited (by Title 13 of the U.S. Code) from releasing any identifying information contained in a census — even to law enforcement agencies. This protects people’s privacy and provides them with an incentive to fill out their forms accurately.

Biographical researchers rely heavily on the U.S. Census for locating and tracing people’s movement throughout history. Researchers often visit the Oregon Historical Society’s (OHS) Research Library looking for ancestors but not knowing where they should look in our records. Often, as reference librarians, we depend on the federal census for help pinpointing a particular family’s location. For example, a descendant of F.X. Matthieu might find their family on the 1870 Census, living in Butteville (not Butterville!):

He and his wife, Rose, are visible at the bottom of this 1870 census sheet, but we would need to turn the page to view the records for their children. Here, Matthieu refers to himself as a “merchant.” This gives the clue to look in OHS’s online catalog to see what holdings the research library might have, if any, about his family. The reward for this search is a manuscript collection (Mss 1091), which includes the account books for his store in Butteville and other rare documents, illuminating the day-to-day life of that community. 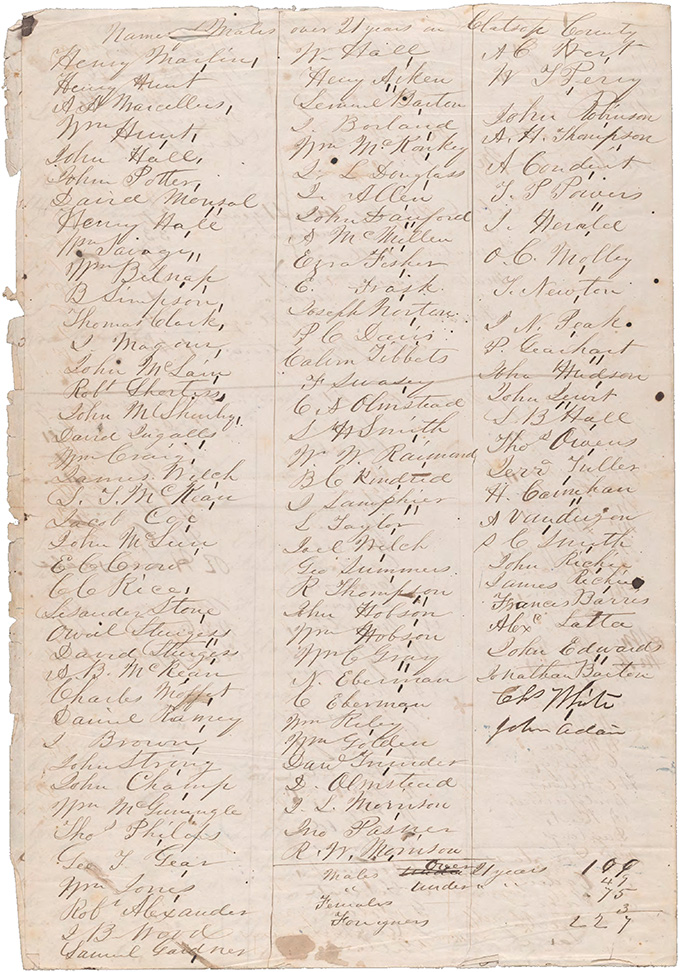 Such treasures may also be discovered in statewide censuses, a topic for another post! OHS is fortunate to have some early county tax rolls and Oregon census materials in its collections, which are now available on the OHS Digital Collections site.

Now that you know all about the importance of filling out your census, take some time to be counted. The year 2020 is the first time the census is available online, which makes the task even more convenient. Stay tuned for future posts on the census and its many merits to researchers!

C is for Census
Inquisitive minds
So many people,
Of all different kinds!