On Sunday May 18, 1980, after several weeks of seismic activity, at 8:32am Mount St. Helens erupted, and the north face of the mountain collapsed. The OHS Research Library’s Moving Image Collection holds many hours of footage documenting the eruption and its aftermath. This still is from a KATU news segment on May 18, 1980. OHS Research Library, MI# 04875

The Oregon Historical Society (OHS) Research Library’s Moving Image Collection consists of film and video tape that ranges in date from approximately 1905 until present day. The collection, one of the largest in the Pacific Northwest, includes home movies, industrial films, and feature and educational films. One of the largest and most accessed parts of the collection, though, is news film — film and video shot on location by local news stations. Stations would send camera crews out to cover the stories of the day — incorporating that footage into the broadcasts that would go out multiple times a day. Most stories were singular — a moment in time and place — but other stories lasted many days or weeks and allowed the stations to shoot a large amount of footage, using many camera crews to report on the story from various locations. 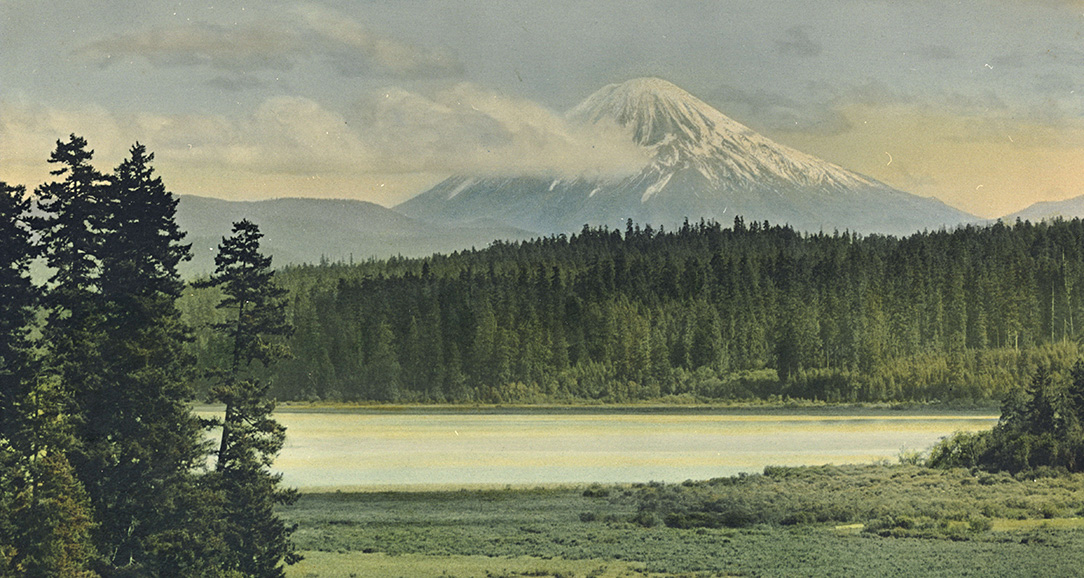 Mount St. Helens is captured here between 1909 and 1914 in this hand-colored photograph by Kiser Photo Co. In the May 1980 erruption, the north side of the mountain collapsed, creating a larger crater and giving it a new, distinct shape. OHS Research Library, Kiser Photo Co. photographs, Org. Lot 140, OrHi 105972, bb002186

On March 27, 1980, Mount St. Helens, located in Skamania County, Washington, started to experience a series of small volcanic explosions and seismic activity. For over six weeks it was increasingly clear that a larger eruption was on the way. On Sunday, May 18, a morning earthquake destroyed the entire north face of Mount St. Helens, which allowed a combination of lava and pulverized rock to explode out of the top of the mountain. This final eruption was directed north, toward Spirit Lake, and consisted of a column of super-heated ash that rose over 80,000 feet in the air. At least 55 people were killed by the explosion and its destructive aftermath. Many hundred square miles of land was laid to waste — rivers filled with debris, camps and lodges destroyed, and bridges washed away. The Burlington Northern Railroad owned the summit of the mountain at the time of the explosion, but in years since it was transferred to the United States Forest Service. The area along the north side of the mountain, which suffered the majority of the impact of the eruption, is now the Mount St. Helens National Volcanic Monument.

When the eruption started in early 1980, local news stations were in the latter stages of a transition away from 16mm film. Used by most news stations since the early 1960s, 16mm film allowed news camera operators to report news stories for the first time on location. This would eventually include the ability to record and sync sound directly on the film using a magnetic stripe. By 1980, though, the stations were moving away from celluloid film toward magnetic video tape. U-matic tape, sized at ¾ inch and encased in a cassette, was the media of choice for stations around the country. Despite arguably poorer image quality, these tapes were cheaper, provided a longer run time, didn’t require photochemical developing, and could be erased and used again. For better or worse, video tape allowed for a more affordable way to shoot a large amount of footage. The quality might not be as good and, archivally speaking, magnetic media doesn’t fair so well over the long run, but for a news station with a tight budget it provided the best way to report the news at that time. 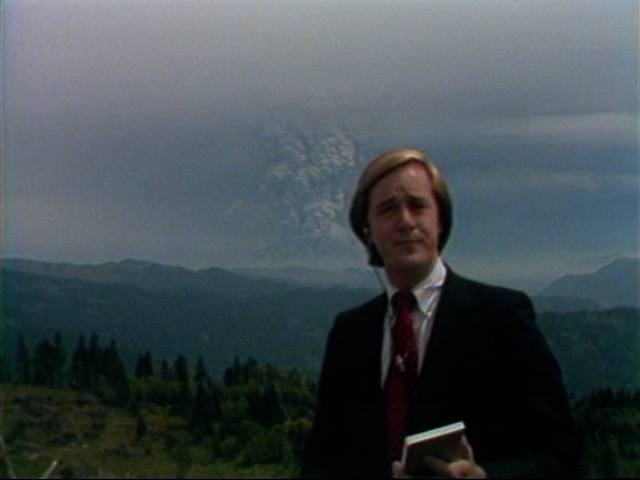 A KATU reporter stands at a distance and discusses information he appears to be receiving in real-time about the May 18, 1980, eruption. OHS Research Library, MI# 04874 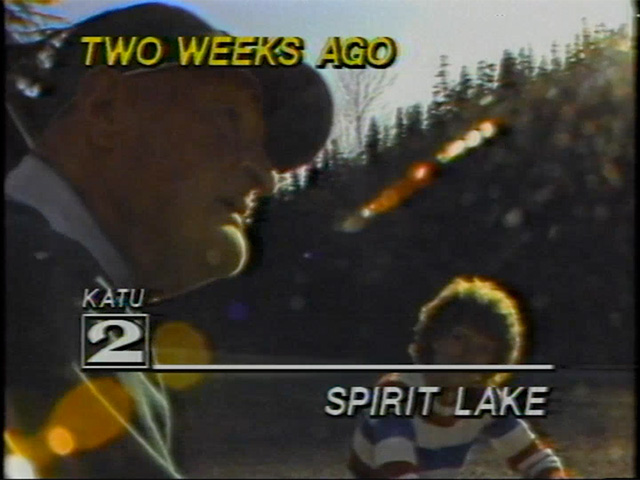 With the relatively long lead-up, news stations in the area (and those from around the world) had many weeks to report on various stories: business and people impacted by the seismic activity, local personalities, scientific updates, wild conjecture, and more. Following the eruption — especially with the use of planes and helicopters — the stations were able to report on the aftermath with startling imagery of the destruction. Also, with the eruption being one of the largest and ultimately deadliest in the history of the United States, this footage was also shared with affiliate stations around the country and the world.

OHS first started to receive donated tapes related to the explosion in the mid-1980s and has continued to collected footage related to this disaster from local stations as recently as last year. OHS now has countless hours of video tape related to the eruption — many from news stations but also other content such as home movies. The following clips, from tapes donated by KATU and digitized last year at Bay Area Video Coalition, comprise footage taken immediately after the explosion on the morning of May 18, 1980, and the days that followed. Over three hours of that footage is now available on OHS Digital Collections.

Reporting from a Distance

Even after being in the news for many weeks, it was still impossible to know when, or even if, the mountain would explode. This left most in the news industry on standby — in theory ready to report at any moment. In this clip, the KATU reporter, after reporting on the immense column of ash in the distance, apologizes almost out of breath: “we’re a little bit rough up here — we ran to the site and got here just now.” Note lightning at 1:12.

The enormity of the situation — by far the largest eruption in the United States in modern times — required stations to use planes and helicopters to get a full picture of the eruption. Even from a plane, it is difficult to fully comprehend the scope of the ash cloud or the path of destruction. As such, much of the raw aerial footage contains individuals plainly asking if anyone can still see the summit and what remains of the north side of the mountain.

Immediately following the eruption, and for days and weeks later, rivers surrounding the mountain were filled with sediment and fallen trees. The Toutle River in particular was jammed with debris — causing large walls of water to back up and flood low lands. The sight of so many fallen trees and debris caused many locals to make the trip to see the swollen rivers themselves.

Harry R. Truman owned and operated the Spirit Lake Lodge, just north of Mount St. Helens, for 52 years. A colorful character — known for his antics around the lake long before the eruption — Harry charmed reporters, scientists, and the public alike. In an article in The Columbian newspaper, dated April 1, 2010, it was noted that Harry owned a pink 1957 Cadillac, swore frequently, and enjoyed drinking whiskey and Cokes. In the weeks leading up to the eruption, many people tried to convince Harry to evacuate but he always refused — not wanting to leave his home of many decades. This defiance, despite rankling authorities, led to him being seen by the public as a folk hero of sorts. On May 18, 1980, soon after the eruption, the Spirit Lake Lodge and, presumably Harry, were lost forever beneath one of the largest landslides in recorded history. This news segment, produced by KATU, clearly demonstrates the love and affection they all had for Harry.

Authorities worked to evacuate people impacted by the eruption almost immediately — many from the Toutle River area along the northwest side of the mountain. Evacuation centers were set up in Longview, Kelso, and Ridgefield to provide shelter and medical care for those impacted by the ash and mud flows.

One immediate impact of the eruption — especially notable in a region known for its timber production — was the almost complete devastation of many square miles of forest surrounding the mountain. From the air, almost without scale, the fallen trees appear like toothpicks or an immense game of pick-up sticks.