When Technical Services Librarian Katie Mayer told me about her plans to try some mysterious recipes from one of the century-old cookbooks held in the OHS Research Library, I was intrigued. When she showed me the “Lettuce Greens” recipe published in the Cherry City Cook Book (ca. 1911), I wanted in. The enigma! The drama! The LETTUCE! With such bare directions and a decidedly non-descriptive title, what could the final product be? The following is my documentation of what turned out to be a delicious lettuce discovery.

Before starting, I tried to imagine where this culinary journey would take me. At first, I thought it would make a broth. There is a lot of water in lettuce, after all, and I was sure that after an entire hour and a half of bathing in boiling water, the lettuce would have broken down into little more than a fibrous sludge. I realized, however, that my prediction couldn’t be true when I read the “drain well” post-boil step. With this information, I decided that this recipe might make something similar to bigos, or hunter’s stew.

Hypothesis formed, it was time to gather the ingredients.

The recipe is delightfully vague on every ingredient.

Lettuce: What kind of lettuce? What size heads? Chopped, de-leafed, or whole? I opted for iceberg, because it’s both cheap and seems to be the type most often called for in older recipes. The heads I used were on the smaller side (about the size of a small cantaloupe). And finally, I decided to use whole leaves rather than chopping, with the hope that they’d hold up better during the long boil. 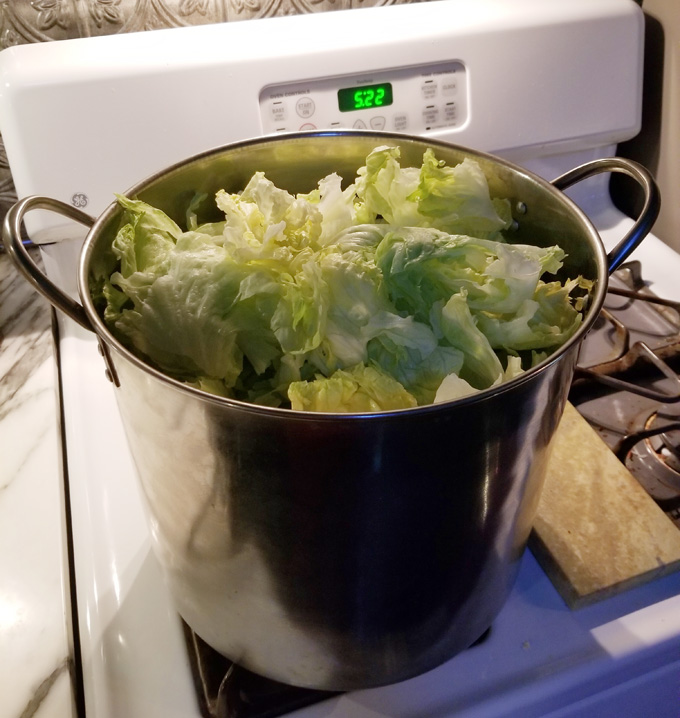 This historic cookbook technical challenge began with five heads of iceberg lettuce, left whole to preserve their integrity over the course of a one-and-a-half-hour boil.

Bacon: I tried to figure out if my bacon slices were larger than those used in the early twentieth century, but the internet provided little help. So, I chose the largest three slices in the package and diced them. The recipe doesn’t specify whether to chop the bacon or leave it whole, but I wanted a bigos-like result. My husband laughed as I resorted to cutting the bacon with scissors after our sharpest knife failed me. Fat is difficult to slice through! 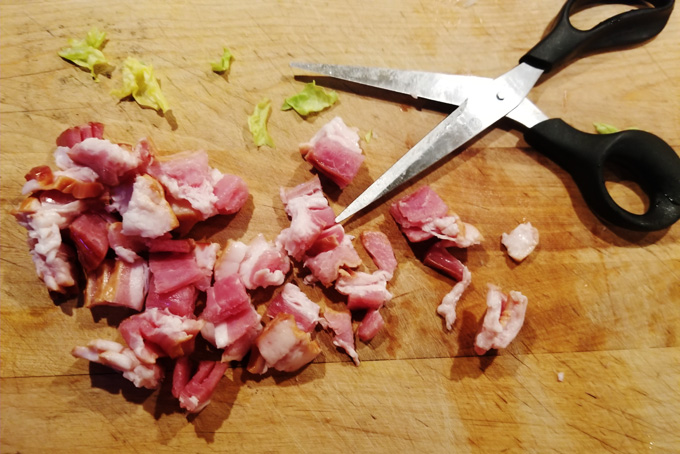 As is typical for early twentieth century recipes, the Cherry City Cook Book’s sparse instructions left this modern cook questioning many of her decisions: “Are my bacon slices big enough? Should I chop it or leave it whole?”

The seasoning: “Vinegar in which a little sugar has been dissolved,” salt, and Buckeye pepper. How much??! What kind of vinegar? What type of salt? And what the heck is Buckeye pepper?

I opted for white vinegar. Regular iodized table salt seemed like it would be easier to evenly distribute over the boiled leaves than coarser kosher or sea salts, so I went with that. And to the best of my researching capabilities, I determined that Buckeye pepper was either a particular brand (now defunct), pepper ground in a grinder made of Buckeye wood, or possibly this pony. The black pepper I already had in my pantry seemed like it would do just fine. 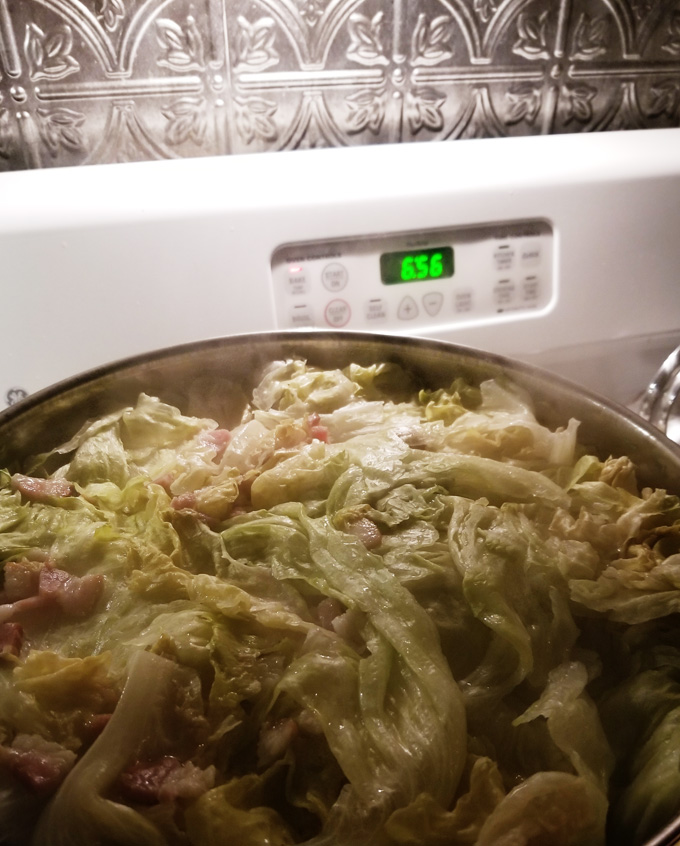 The boiled lettuce greens are pictured here after the time it took to bring five gallons of water to a boil — about an hour. At this point OHS Oral History Librarian Sarah Stroman began to wonder how an early-twentieth-century cook might have passed the time.

At 5:51 pm on a Friday evening, I began boiling five heads of de-leafed lettuce with three diced bacon slices in a five-gallon stockpot filled with enough water to just cover the goods.

While waiting for the giant pot to boil, I began to wonder how long it would take for approximately five gallons of water to boil on a wood burning stove, or even over an open fire. What sort of things would an early-twentieth-century cook have attended to while waiting? Making bread? Churning butter? Me, I played a Harry Potter game on my phone for the hour it took the bacon-lettuce-water to reach a boil on my gas stove.

From there, it was an hour and a half of boil-time, and it became clear that I was in for a long night. A proper cook would have started this culinary masterpiece much earlier in the day. They also would have had some idea whether the mixture was meant to be eaten freshly cooked or stored in a crock somewhere cool, such as sauerkraut or kimchi.

I boiled it uncovered and planned to save the lettuce water for use as a broth, which meant it needed to boil down as much as possible. The lettuce naturally floated to the top, and I made sure to stir it occasionally, pushing the leaves and bacon bits below the water line. My entire house began to smell like boiled lettuce with a hint of bacon — which reminded me of my grandmother's house at Christmas. My husband was less charmed, however, and despite the bitter cold outside, he cracked open the backdoor to encourage the aroma to escape.

The hour and a half of boiling time went by surprisingly fast, and at 8:28 pm, I shut off the heat and prepared to “drain well.” I was thwarted in my plans by the incredible weight of five gallons of water and used a pitcher to scoop out some of the water into a smaller pot, allowing me to strain the remaining stew. In the end, I had about three gallons of lettuce-water and about a quart of Lettuce Greens. 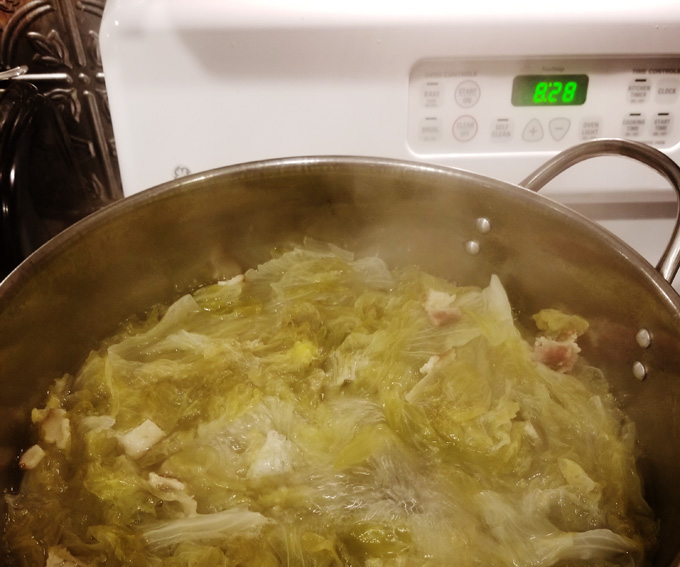 When the greens finally boiled for their full cooking time, nearly three hours had passed, leaving about three gallons of liquid and about a quart of greens.

I seasoned the mix using two heated cups of white vinegar with one quarter cup of white sugar, one teaspoon of table salt, and a generous amount of ground black pepper. I immediately realized that I'd used entirely too much vinegar! My miscalculations had made a vinegar-lettuce soup! On the verge of failing this technical challenge, I cheated and just let the lettuce-soup steep for a few minutes before draining it all again — leaving behind some very vinegary lettuce leaves.

Dear reader, if you, too, decide to embark upon a similar lettuce discovery journey, I advise you to use about a quarter as much vinegar and sugar as I did. 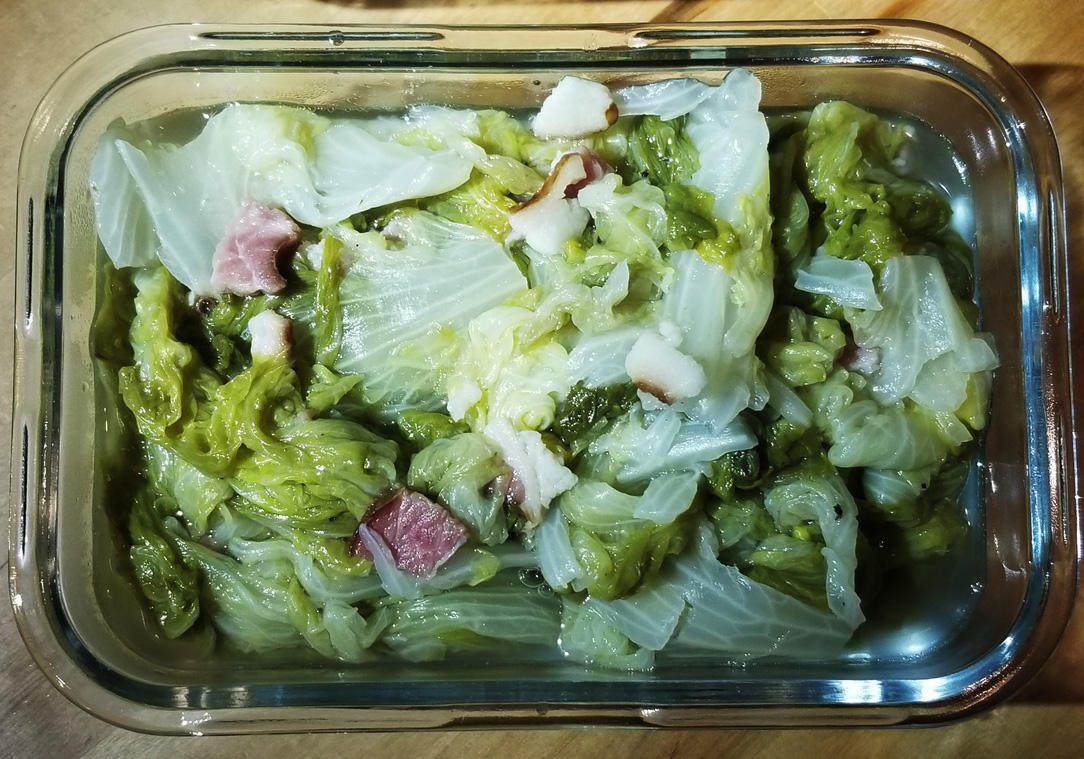 After draining and a near-disastrous seasoning mishap, the Cherry City Cook Book lettuce greens turned out to be pretty tasty. In thrifty early-twentieth-century fashion, Stroman seasoned and cooked down the leftover liquid to make a tasty broth.

After seasoning, I confirmed my hypothesis that it would end up tasting quite a bit like bigos. It looked fairly similar as well. Perhaps it was meant to be a relatively quick stand-in version, for when sauerkraut and/or cabbage levels were low.

I boiled the leftover lettuce water the next day with a bit of salt to make a flavorful broth, which my husband used to make a bean stew. That and the greens made wonderful leftovers for the week. We attempted to get our resident toddler to try the Lettuce Greens, but he was largely unimpressed. I’d say that while the adults found the greens quite enjoyable, the time required to make the recipe doesn’t seem worth the investment. I don’t foresee us making this again, unless we’re faced with an oversupply of lettuce. If only there were a similar recipe that called for zucchini during the summer bounty!

Be sure to check out the slideshow of selected recipes from the OHS Research Library collection in Katie Mayer’s December blog post, “Brains, Skills, and Butter: Sample a Feast of History in Century-old Cookbooks.” And if you find something you want to try, we’d love to hear about your adventures in navigating old recipes in our collections. 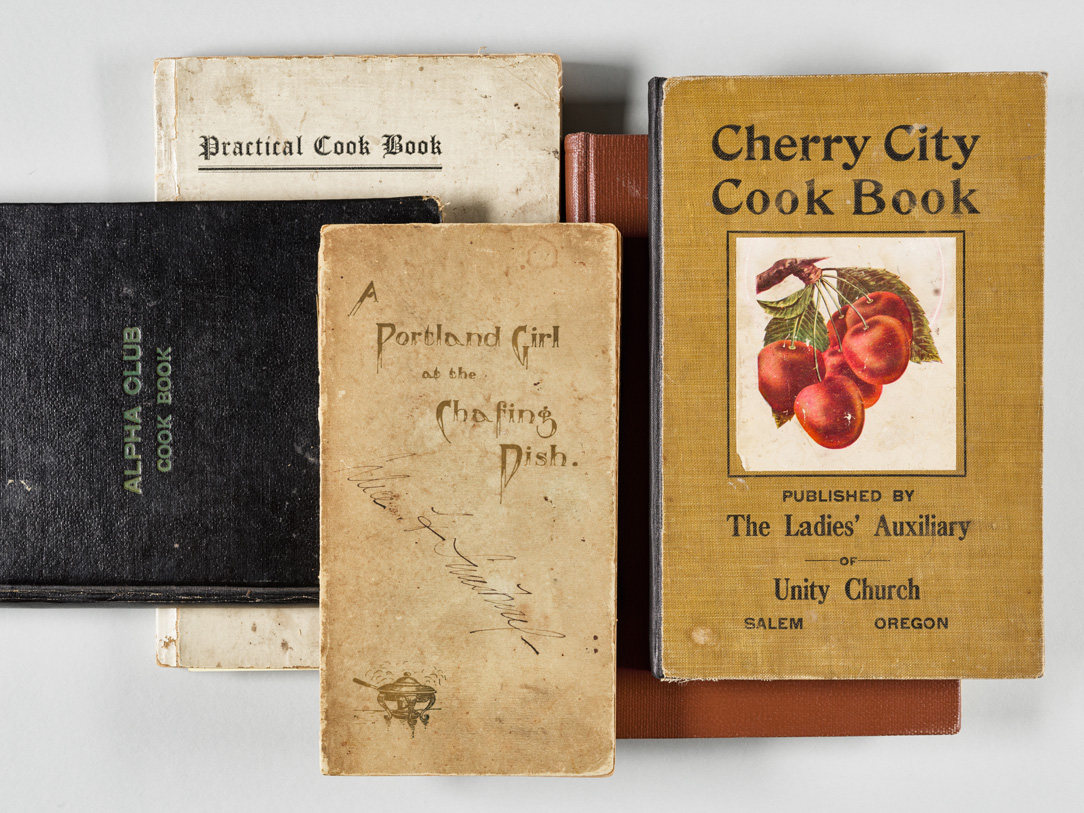 Brains, Skill, and Butter: Sample a Feast of History in Century-old Cookbooks

Peruse cookbooks of yore in the OHS Research Library, and you'll encounter dishes that inspire reactions from curiosity to cringes. With recipes ranging from soups and cakes to brains on toast, historic cookbooks yield hints about the cooks who provided and used the recipes, about the equipment available to them, and about which foods were abundant or scarce. OHS Technical Services Librarian Katie Mayer takes readers