Today we’re unearthing a story from Bernie Foster, the co-founder and publisher of The Skanner, a Portland-based weekly newspaper focused on issues affecting African Americans and underserved communities in the Pacific Northwest. He was instrumental in the renaming of Portland’s Union Avenue to Martin Luther King, Jr., Boulevard in 1989.

The following excerpt (that we lightly edited for clarity) is a tale Foster told during a 2017 interview conducted by Jan Dilg (SR 1035, Session 2). In the interview, Foster shares the strategies he used to convince the Portland City Council to adopt the street name change, and how they chose Union Avenue as the ideal location for what is now Martin Luther King, Jr., Boulevard.

Jan Dilg: Well, that might be a good segue into a decision you made that very much involved the [Skanner] newspaper back in the 1980s, when you thought Portland ought to have a street named for Martin Luther King, Jr.

Bernie Foster: Again, that wasn’t me. See, remember I said earlier people gave me some of the best ideas in the world? It was two ladies. They had just came back from Denver, and they stopped by the office, and they said: “We just left Denver, and we don’t have a street out here by the name of Martin Luther King, Jr., Boulevard.”… And at that time — I don’t know if you’ve ever been to Denver or not. Okay. Used to be, remember the Stapleton airport? Right there. It was a long street. That’s where we got the idea from, so we just took it. That truck had about a hundred and thirty stops. We just took some petitions and asked the people did they want a street named, and put it out there and put it in the paper, and we put it at every stop — four or five of them — and had them sign it. 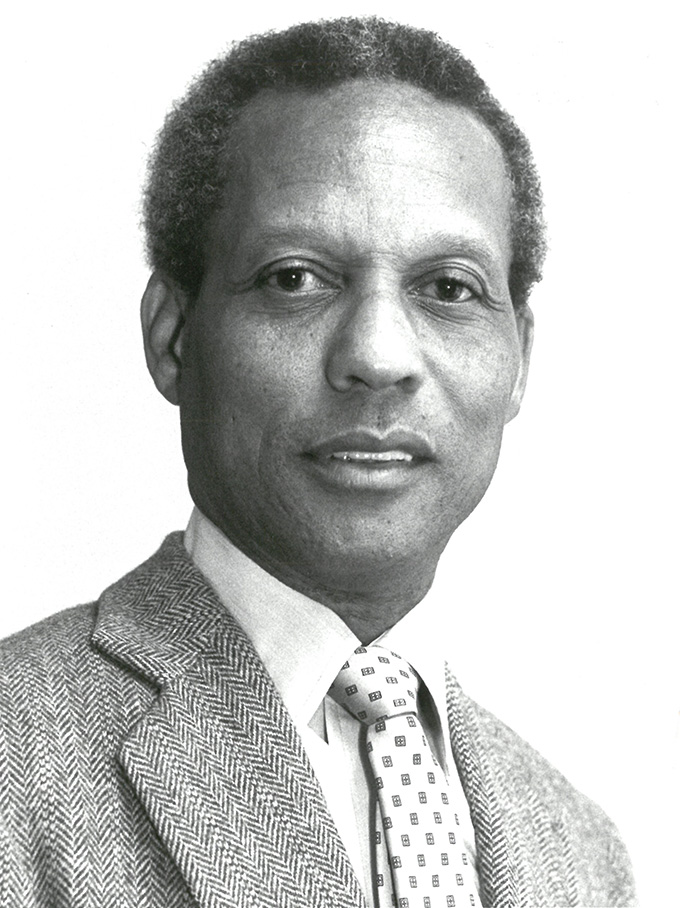 In 1975, Bernie Foster founded “The Skanner” newspaper with his wife, Bobbie Dore Foster, in Portland, Oregon. In 2017, Jan Dilg conducted an oral history interview with Foster where he discussed the history and daily operations of “The Skanner,” some of the stories he published, his attempts to expand into radio, police brutality, local politics, and the renaming of Union Avenue to Martin Luther King, Jr., Boulevard. in Portland. OHS Research Library, Org. Lot. 1286.

We did it that summer, and we end up with about six thousand signatures. At that time Earl Blumenauer had just… won…the city council seat — he won by twelve hundred votes. I had six thousand, and I laid them on his desk [knocking sound]. “They want a street.”…

Dilg: This was a multi-year process.

Foster: Took about three years. And then they had to [leave the signs up for] Union Avenue…for five.… And by the way, the first [sign for Union Ave.] that went down there, we had a festival on the Safeway parking lot, okay? And then you had these people across the street picketing us [Foster laughs]. And I knew the game….You could tell they were a little hungry. So, I went over there, and I said: “Hey, you guys want some coffee and cake?”

“No, you’re almost there. Come on over! Put the sign down and come on over!”

They came over, stayed about thirty-five, forty minutes. After we started celebrating, he said: “Well,” he said, “You mind, but now [laughingly] we got to go back to work.”

I said, “Okay, go on back to work [both laughing].” That’s a true story. They were out picketing, and I invited them in.

Dilg: Because there was some vocal opposition. And perhaps even beyond vocal. Some overt actions.

Foster: Well, some windows were broken, stuff like that. I never did get any verbal threats other than to come in and find two or three windows broke…

The second, we knew that the convention center was coming, and it’s 777 Martin Luther King, Jr., Boulevard. That’s the address. So, we knew everybody had to write that all over the world [Dilg chuckles]. Ain’t going to be no MLK.

The third, it had to be that major arterial on the freeway, so when they get off that means that they have to change the city map, the state map, and the federal maps. All of that. That was the strategic planning behind it. So, if you drive out there right now, you’ll see Martin Luther King, and we told them it couldn’t be no M-L-K. Milk [both laugh].

Because it’s a long sign. It’s a long name [both chuckle]. Didn’t have enough room, you know: “Wait. Hold on there, Bernie.” That was the state. They all came up here. Earl [Blumenauer] came here.

Well, anyway, you have to give them a false sense. So the first time we did it, we went downtown to city hall, and we named Front Avenue. Front Avenue was never the deal. That was not the… [chuckles] Everybody hollered and screamed.

“Well…” Now these people didn’t want it, but we did not want no Front Avenue. Too short. No major arterial….Got into city hall, and everybody was all upset about it, then we went over there….

So now, one of our strategies was that no Black males should appear on camera talking about Martin Luther King, Jr., Boulevard. Had to be the females — softer. Softer voices. And I don’t mean nothing negative about it, but that’s what we planned on. Softer voices, less threatening.…

And one thing I learnt about television, what you just did: you just smiled [Dilg laughs] even though you’re pissed off, it pisses you off [laughs]. And I’m smiling, and the questions she was asking me were making me angry, but I show no anger, just smile [Uses a soft tone], “No.”

But, you know, you look back on it. But, it was fun. It was fun, it was a good cause, and we did it, and now there’s other things. They change other stuff like that and you move on. Do you get any credit for it? Most people don’t even know I did it, or we did it. No big deal, it’s done. How soon people forget, but if you laying around here just fitting to get pat on the back, no. That don’t happen in this line of work [both laugh].

*This interview history was conducted as an ongoing series of oral history interviews with Oregonians nominated by a staff committee appointed by the OHS Executive Director. The purpose of these interviews is to create historical documents of enduring value that will enhance and expand the range of Oregon voices preserved by the OHS Research Library.

More of Foster’s interview can be found online at https://digitalcollections.ohs.org/sr-1035-oral-history-interview-with-bernie-foster-by-jan-dilg

Copyright for this interview is held by the Oregon Historical Society. . Use is allowed according to the following statement: Creative Commons - BY-NC-SA: http://creativecommons.org/licenses/by-nc-sa/4.0/