Spectators sit on the beach near Florence, Oregon, on November 12, 1970, to witness the Oregon State Highway Division blow up a beached whale. The event is documented in KATU 16mm news film held in the Oregon Historical Society’s research library collections. All images in this post are from the collection OHS Research Library, MI 11196, “Beached Whale - Blow-Up - Florence, Oregon” – KATU 16mm News Film Collection.

On the morning of November 12, 1970, KATU news directors asked reporter Paul Linnman and cameraman Doug Brazil to cover an unusual story taking place on the Oregon coast. A 45-foot sperm whale had washed up on the beach near Florence, Oregon, a few days prior, and the Oregon Highway Division was left to come up with a plan on how best to deal with 8 tons of rotting whale flesh. What caught the attention of the news room in Portland, however, was not the whale itself but the plan of how to best dispose of the carcass: dynamite. Linnman, speaking to the Oregonian in 2004 to promote his then recent book, The Exploding Whale: and Other Remarkable Stories from the Evening News, noted simply: “We went down there because we thought it was so bizarre.”

The duo from KATU set up their shot about a quarter mile away — presumably a safe distance — but soon after were being pelted from above. “When the blubber started hitting the ground around us, we realized we weren’t far enough away,” Linnman said later in the article. “We were running away when we heard a second tremendous explosion in front of us. A piece of blubber the size of a coffee table hit the top of an Oldsmobile and completely flattened the roof.” Folks there that day remember the smell as well — noting that it lingered on those present for days afterward.

At the time, Linnman and Brazil had no idea that the news footage they captured would become, arguably, one of the most watched films in Oregon history. The footage eventually made the evening news — an odd, singular moment in Oregon history — and the seemingly one-time story found legs. A video-tape copy was made and shared. Copies were made of copies, image quality deteriorating with each duplication. Dave Barry, a columnist for the Miami Herald, mentioned the footage in a column he wrote in May 1990. Although Barry’s column is often credited as the instance that generated initial interest, the footage didn’t really take off until a copy of the broadcast found its home on the internet, quickly being shared across many websites. Long considered to be one of the first viral videos, a 2006 United Kingdom study estimated that the exploding whale video had been viewed 350 million times to date. 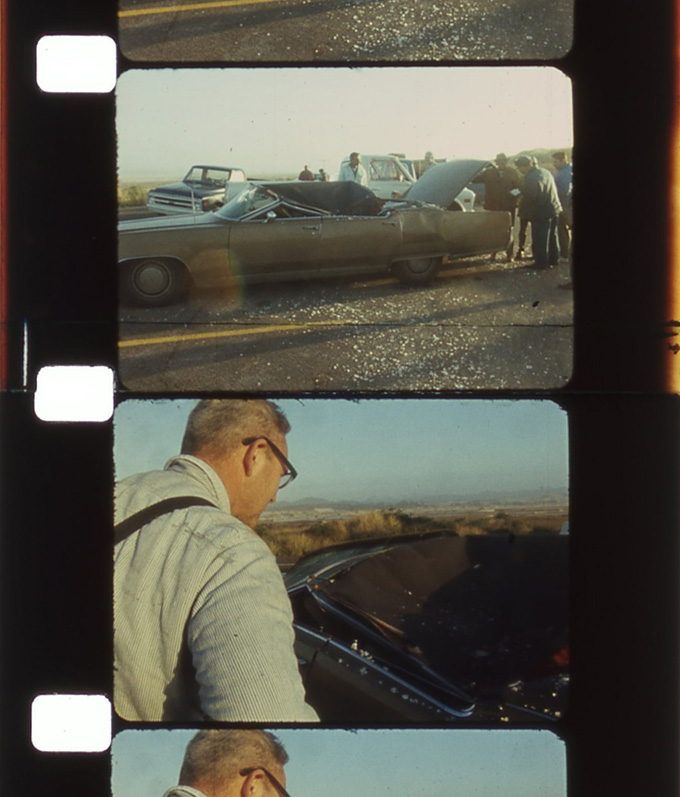 Although news crews and onlookers were located about a quarter mile away, the explosion was so large that whale debris pelted them from above. A piece of blubber the size of a coffee table crushed the roof of a car nearby. OHS Research Library, MI 11196. 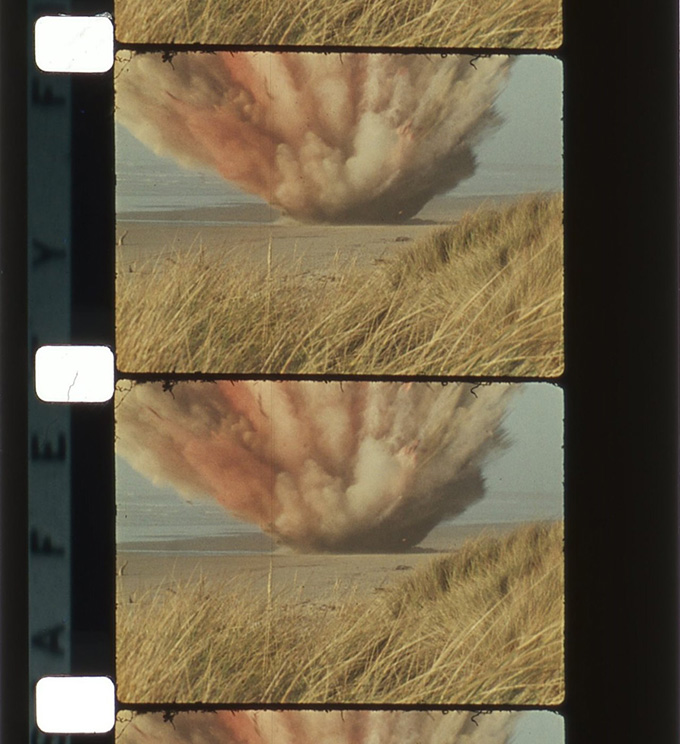 The unedited footage of the whale explosion near Florence, Oregon, is captured on 16mm color reversal motion picture film with a live audio track recorded directly on a magnetic stripe on the film. Unlike other degraded copies available for view on the internet, the event, now available for view on OHS Digital Collections, projects a crisp image with vibrant colors.

Linnman and Brazil captured the original unedited footage on 16mm color reversal motion picture film. They recorded the audio track live, on location, on a magnetic stripe directly on the film using an attached microphone. As opposed to the degradation that happens with video tape from making a copy of a copy of a copy, the original 16mm film — what was shot that day on the beach — still projects a crisp image with bright vibrant colors.KATU donated the original 16mm footage to the Oregon Historical Society in the late 1980s. The footage has been transferred over the years to various video formats, but this is the first time it has been scanned at 4K resolution — or a display resolution of approximately 4,000 glorious pixels across the horizontal. The film was transferred by AV Geeks in Raleigh, North Carolina, on behalf of the Oregon Historical Society. It is now available to view online on OHS Digital Collections and at the end of this post.

The Wikipedia page dedicated to the exploding whale notes, perhaps with a touch of sadness, that the current policy of the Oregon State Parks Department is to bury whale carcasses where they wash ashore — dynamite is no longer needed.

On November 12, 2020, Paul Linnman will join OHS Executive Director Kerry Tymchuk for a special virtual event to commemorate the 50th anniversary of the Florence whale explosion. In this conversation they’ll discuss the event that blasted both blubber and his career skyward. The special virtual event from 7pm to 8pm is free and open to the public. Visit the event’s page to learn more and register. 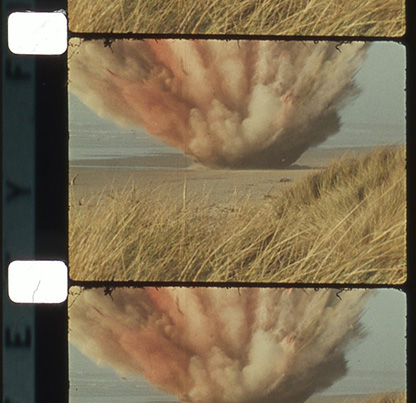 The 50th Anniversary of Blasted Blubber: A Conversation with Paul Linnman

Join us on the 50th anniversary of the Florence Whale Explosion for a conversation between legendary Oregon broadcaster Paul Linnman and OHS Executive Director Kerry Tymchuk about the event that blasted both blubber and Paul’s career skyward.