Home Blog An Array of Buttons: The Story Behind OHQ’s Spring 2021 Cover

Amateur: “this word once described a person who could not be otherwise than happy, since [they] were doing something for the love of it; not for material gain, not even for fame or pre-eminence: [they] simply gave the head and heart, and rejoiced.”

Growing up in the Southwest, I spent many hot summer days browsing the aisles antique stores and thrift shops in my hometown of Ahwatukee, just outside of Phoenix, Arizona. My mom would drive me and my brother across town to visit her favorite Mid-Century retailers, where we would ogle over the displays of swag lamps and gravel art. Those objects were remnants of a time I never knew but my mom remembered well, and if I was lucky, I would find a tchotchke that I would beg to take home. Antique stores rarely provide context or thoughtful interpretation, so they can often lead to mysteries and unknown provenance. As a graduate student now pursuing a degree in public history, I think about those cross-town shopping trips and how they likely contributed to me being an amateur historian long before I knew that I wanted to be a professional one.

You might say that collecting is in my genes. When my great-great grandfather Jacob emigrated from Poland alongside my great-great grandmother Pearl and their eight children, he became a “junk dealer.” To support his family, he collected used goods to resell to others. I was born almost 100 years after Jacob arrived in North America, but I still connect to my familial roots when I walk into a secondhand store — even thousands of miles from the statuesque saguaros (cactus) in Ahwatukee. Among many things, I collect Viewmasters, warm-toned Tupperware, antique carnival memorabilia, and old buttons and pins. I seek out items that I have a connection to or items that bring me joy, and I relish in knowing the details of all of my tchotchkes. The work of being an amateur historian and researching the history of secondhand treasures recently overlapped with my work as the Oregon Historical Quarterly’s (OHQ) Rose Tucker Fellow. 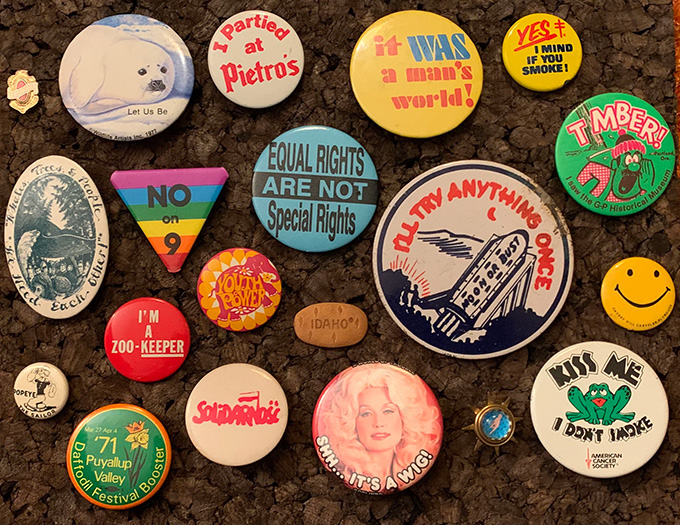 Among other items, Sarah Harris collects old buttons and pins. A few of them are shown here.

The OHQ Rose Tucker Fellow helps lead others to a thoughtful understanding of the past by fact-checking and researching images for the publication. I confirm numbers, names, ideas, quotes, and all “sourceable” material for each OHQ article. That work helps lead to clarity, not mystery, and it sometimes requires creativity to source materials — especially during a pandemic. Historians rely on two main types of evidence for their research: primary and secondary sources. Primary sources are original materials produced by those involved in a historical event, and secondary sources synthesize and analyze primary sources. 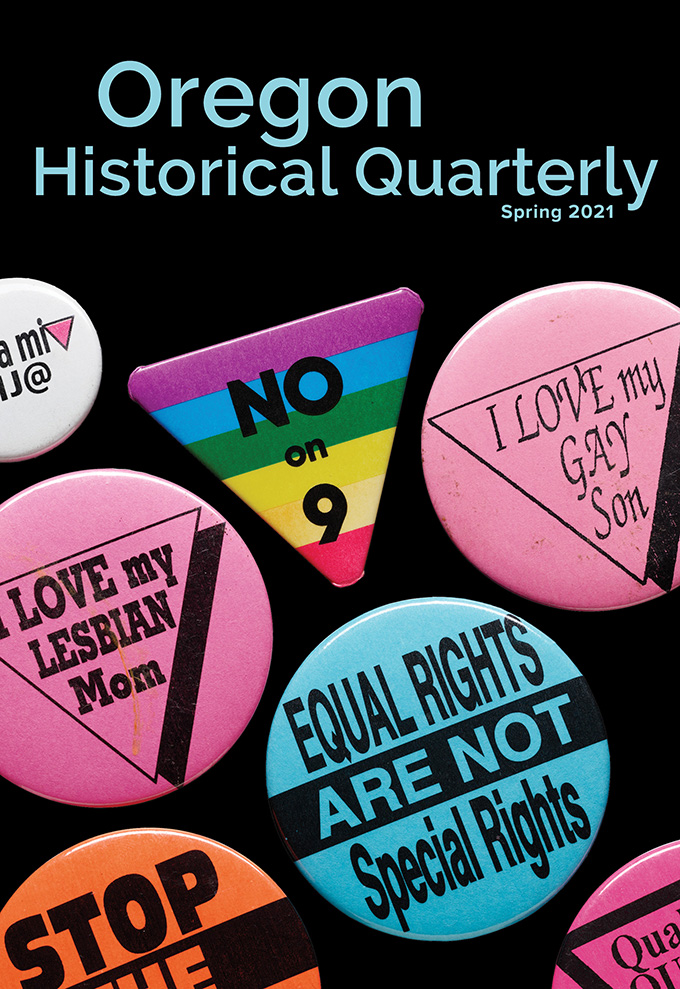 Research for the Spring 2021 cover of the Oregon Historical Quarterly led to Sarah Harris finding out about the histories of a few buttons in OHS’s museum collections.

While fact-checking and researching images for Will Schultz’s article, “The Rise and Fall of ‘No Special Rights’,” published in the Spring 2021 issue, I had the opportunity to explore the Oregon Historical Society’s large collection of primary-source material and ephemera related to LGBTQ groups and community organizations in Oregon as well as materials from the anti-LGBTQ groups and politicians that sought to limit their freedoms. In the article, Schultz explores Oregon’s anti–LGBTQ rights measures during the late 1980s and early 1990s and a similar campaign, Amendment 2, in Colorado. For the cover image of the issue, I worked with Nicole Yasuhara, OHS’s Deputy Museum Director, to select a sample of political buttons and pins from OHS’s museum collections related to anti–LGBTQ legislation in Oregon such as ballot Measure 9 — a measure Schultz describes as “one of the most comprehensive and harshest antigay measures put to voters in American history.”

We wanted to highlight an array of the pins, but the museum database had varying amounts of identifying information. To find the history of a new pin or object that I purchase at a thrift shop, I use a variety of descriptive words and phrases online to locate similar items resale sites or in original advertisements. I employed those same tactics for Schultz’s piece, and I turned to the internet to see what variety of pins came from Oregon during this time. My search quickly led to an eBay listing titled: “No on 9 Button Nirvana benefit show 1992 Portland oregon pinback pin.” The listing showed an upside down triangle pin with the bold black text, “NO ON 9,” and it matched a pin held in OHS’s collections. The item description detailed the benefit concert, something I had not known about prior to this search. I was thrilled to share the connection and additional historical context with my colleagues, and the pin ended up front and center on the Spring 2021 cover of OHQ. As excited as I was to learn about the history of the Nirvana pin (and I was!) I found that learning the history of the blue “Equal Rights ARE NOT Special Rights” button to be even more meaningful, as it was already a part of my personal collection. 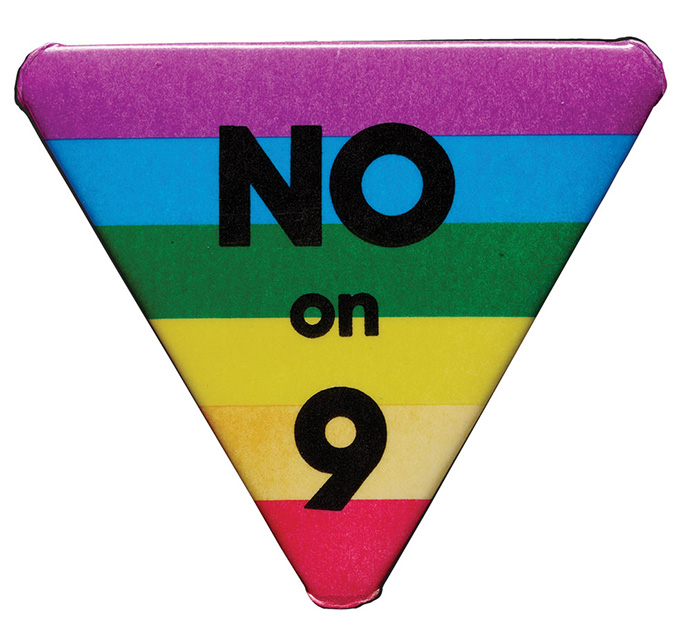 This “No on 9” political button was sold at a 1992 Nirvana benefit concert in Portland, Oregon. OHS Museum, 2008-31.18. Photograph by Robert Warren 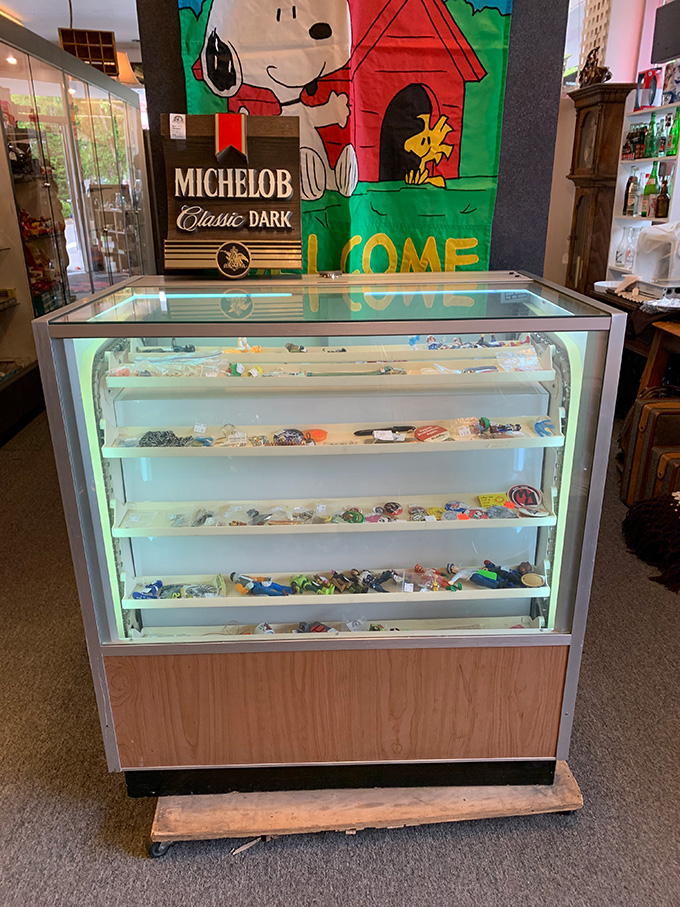 One of my favorite local thrift stores is located in Historic Downtown Milwaukie: Main Street Collectors Mall & Soda Fountain. If you’re interested in eating a sandwich or a scoop of ice cream at the old-school (and functioning) soda fountain, you can! Prior to the pandemic, you could eat your meal in the very stool that then Sen. John F. Kennedy sat in while visiting the building when it was the Perry Pharmacy. If you’re like me, you’ll find yourself getting lost while flipping through the large, motor-powered displays of small trinkets that are opposite the soda fountain. When you hold down the button, there’s a seemingly endless rotation of political buttons, old Disneyland tickets, and plastic figurines. It was in this display a few years ago that I came across the “Equal Rights ARE NOT Special Rights” pin. I recognized the slogan but didn’t think much of it, and I took it home with me and placed it on my cork board alongside my previously thrifted pins and buttons. The button sat there until I began researching images for “The Rise and Fall of ‘No Special Rights’,” and I realized the pin that I originally thought was much older was actually created for Oregonians seeking equality less than thirty years ago.

With his article, Schultz helped connect Oregonians to the historic and ongoing struggle for equal rights, and he also helped me make a connection to this bit of history in my home. As I move closer to becoming a professional historian, I know that at my roots will always stem from that amateur historian in me; my passion for history comes naturally, but my education continues to expand my understanding of the many ways history informs our world. I am humbled by my position as Rose Tucker Fellow, and I am grateful that my work helps me make historic connections in unexpected places. When the Spring 2021 edition of the OHQ went to press, and I received my copy in the mail, I was thrilled. I opened the journal and scanned through the pages, knowing that I helped contribute to this important publication. I placed it on my bookshelf that stands next to my pin collection, and my little blue button stood next to its newly delivered neighbor: an upside-down triangle pin with a rainbow backdrop and the boldly lettered phrase “NO ON 9” stamped on top. 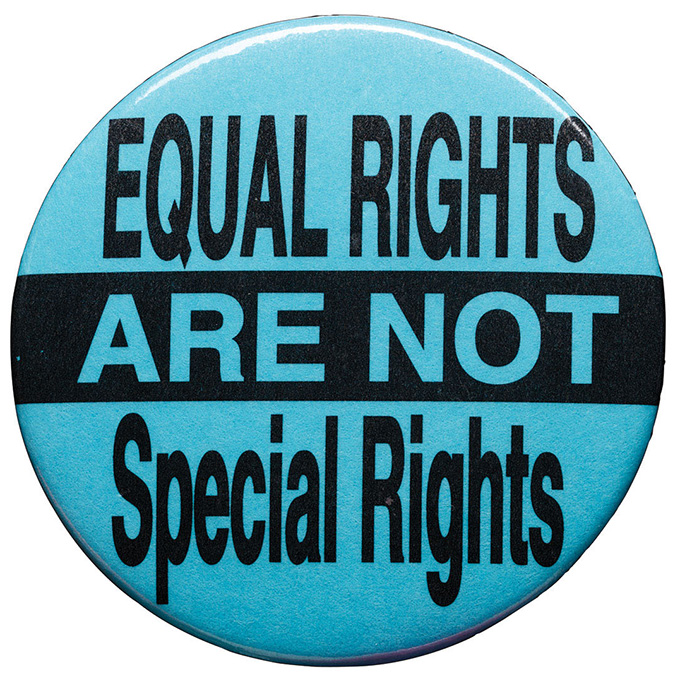 This Equal Rights ARE NOT Special Rights political button held in OHS’s museum collection refers to a campaign slogan against a 1990s anti–LGBTQ measure in Oregon. OHS Museum, 2003-73.12. Photograph by Robert Warren.