In July 2019, Oregon Historical Society museum staff visited Abernethy Elementary School in Portland, Oregon, to view progress on a New Deal-era mural that Heritage Conservation Group conservators are currently restoring. OHS museum staff regularly visit local museums and cultural organizations to engage in professional development and deepen their connections within the community. Pictured here is a photo montage of a portion of the restored mural, “A Pageant of Oregon History,” by artist Erich Lamande.

Oregon Historical Society museum collections staff regularly engage in professional development and networking by visiting local museums or cultural organizations. In doing so, we learn about the history and culture of the Pacific Northwest, discuss current projects and issues with our peers, and deepen our relationships within the community. In late July 2019, paintings conservator Nina Olsson invited us to view her progress restoring a New Deal mural titled A Pageant of Oregon History at Abernethy Elementary School in Portland. The following is an account of that visit and follow-up discussions with Olsson about her work.

Photographer Minor White’s 1940 photographs of the mural at Abernethy Elementary School, which had been painted over in 1960, were the only existing evidence of the art. The image inspired Nina Olsson of Heritage Conservation Group to search room by room at the school searching for the mural’s location. This photo montage shows some of the architectural details that were clues during that search. Minor White photographs courtesy of the Portland Art Museum Archive, montage by Heritage Conservation Group.

The mural, completed in 1940 by Erich Lamade, was painted during the Great Depression under President Franklin Roosevelt’s Works Progress Administration (WPA), Federal Arts Project (FAP). In 1960, the work was painted over and completely concealed, likely in an effort to clean and modernize the school. Only photographs taken by Minor White (another WPA artist), existed as evidence that the mural remained under years of paint and forgotten memories. Inspired by Minor White’s images, Olsson and art historian Ginny Allen searched rooms at the school looking for clues about whether the artwork lay hidden within. The school’s library had the same architectural elements depicted in White’s photographs, so Olsson chose a small section of wall to perform an exploratory test. After carefully removing several layers of paint, a small human face emerged as evidence that Lamade’s work not only still existed, but could be recovered.

Olsson and her company, Heritage Conservation Group (HCG), secured funding to start the restoration in the summer of 2018 and was able to uncover the southeast and south walls of the frieze, which wraps around the top of the wall of almost the entire room. Olsson discovered that Lamade had primarily painted the mural using casein, a traditional technique that uses pigment bound with milk protein. She described to the OHS museum staff that if the mural had been executed instead in oil paint, it would have been almost impossible to uncover. Casein’s unique properties kept it generally safe from the solvents used to remove the six layers of paint on top. Olsson and her team carefully removed sixty years of accumulated latex, calcimine, and oil wall paint, uncovering first the black contour outlines of the mural’s forms. They then moved on to reveal the colored fields and finally removed the overpaint from the background to reveal a golden setting, reminiscent of the friezes found in the Egyptian tomb of King Tutankhaman. With additional funding, Olsson uncovered the western wall of the room in 2019, and after final funding is secured, she will complete the restoration of the northern and northeastern walls in the summer of 2020. 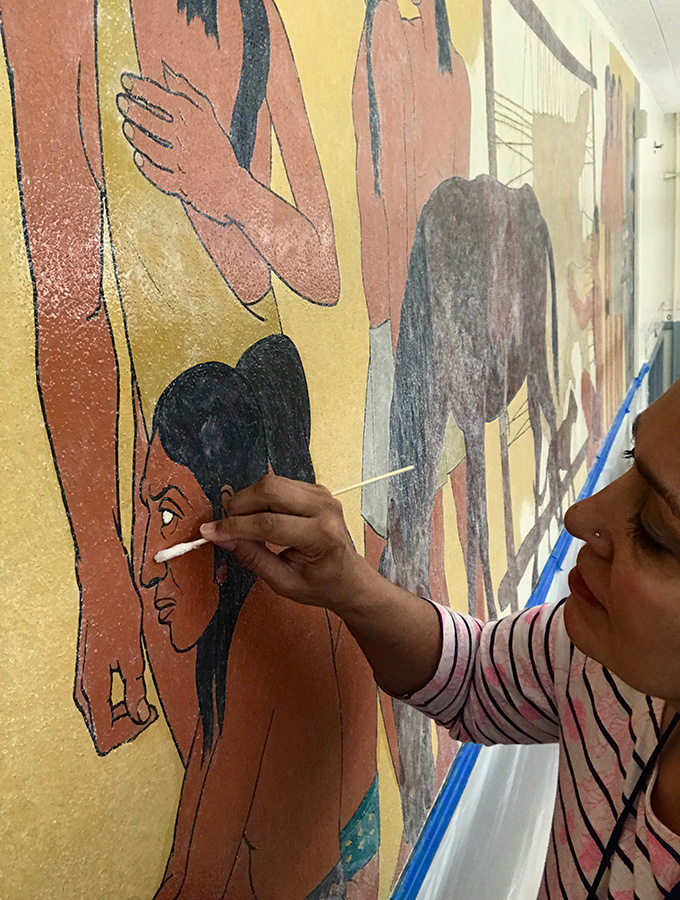 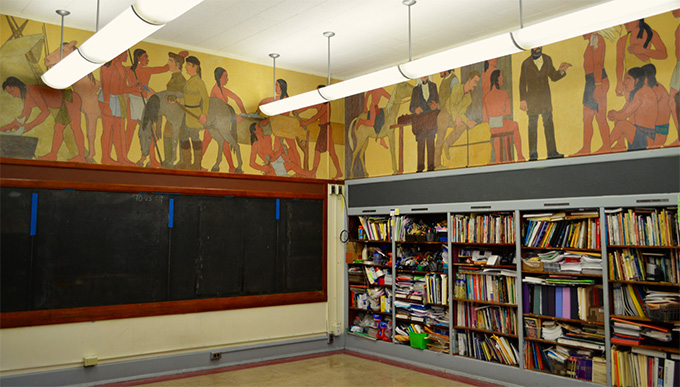 Erich Lamande’s mural, “A Pageant of Oregon History,” wraps around the frieze (or top of the wall) of most of the old library in Abernethy Elementary School. The mural is chronological and is intended to be a retelling of Oregon’s history beginning with Native peoples through industries that were important to the state during the New Deal era. This is a view of the southwest corner of the room. Photograph courtesy of Heritage Conservation Group.

A Pageant of Oregon History is an ode to the influence of the Western genre and mythologies of the American West in Europe during the first part of the twentieth century. Lamade was born in Germany and lived in Oregon after emigrating to the United States. The mural is a chronological, generalized retelling of Oregon’s history, beginning with Native peoples carving rock art and drying salmon; moving on to the arrival of Lewis and Clark, John McLoughlin, the beaver fur trade at Fort Vancouver, Oregon Trail migrants, and politicians; and continuing through time to portray the timber and shipping industries that were important local economic resources during the New Deal era.

A photo montage of the restored mural, “A Pageant of Oregon History,” by artist Erich Lamande. (Click the image to view full-size.) 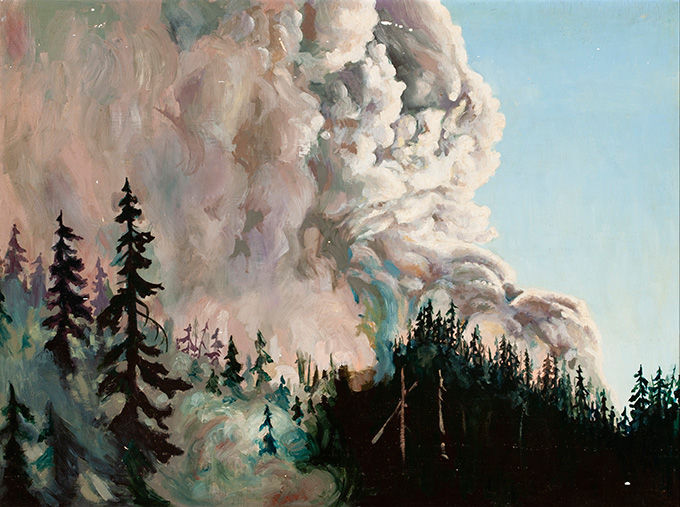 Thousands of works of art were created under several New Deal programs, and OHS is a repository for several pieces of movable New Deal Art, including this painting titled “Reforestation” by Littleton Dryden. Although OHS holds the paining in its museum collection, it is still owned by the federal government and administered by the U.S. General Services Administration.

Thousands of artworks, both moveable and non-moveable (such as murals), were created during the New Deal under several different programs (WPA/FAP, Public Works of Art Project, The Section of Fine Arts, and the Treasury Relief Art Project). For ease, all works created under the New Deal are referred to as New Deal Art. Moveable New Deal Art is still owned by the federal government and administered by the U.S. General Services Administration, although it is cared for and physically possessed by other repositories and individuals. Non-moveable New Deal Art that was made for public buildings, such as A Pageant of Oregon History, is considered a part of the building, due to sharing a physical structure. You can also see other notable Oregon New Deal Art at Timberline Lodge (including Lamade’s wood relief carving Forest Scene). Portland Public Schools is a steward of a significant collection of New Deal works, including another piece recently restored by Olsson: Aimee Spencer Gorham’s wood marquetry mural Send Us Forth to be Builders of a Better World at Chapman Elementary School in Portland.

OHS is a repository for several pieces of moveable New Deal Art, including paintings by Littleton Dryden and Rockwell Carey. Some of those pieces will be loaned to the Tacoma Art Museum for an exhibit on New Deal Art in the Pacific Northwest opening in February 2020.