Home Blog Treasures from the Oregon Vault: A Mystery Romance?

This gold men’s ring was listed in a 1947 inventory of the Beekman Bank in Jacksonville, Oregon. OHS Museum, 70-171. Photograph by Robert Warren.

The Oregon Historical Society (OHS) is dedicated to making Oregon’s long, rich history visible and accessible to all. For more than a century, OHS has served as the state’s collective memory, gathering and preserving a vast collection of objects, photographs, films, manuscripts, books, and oral histories. Those collections, cared for by museum and library staff, are held in a 100,000 square foot facility sometimes referred to as the Oregon Vault.

In this series, “Treasures from the Oregon Vault,” museum staff highlight their favorites from the over 75,000 objects they safeguard, including costumes and textiles, Native American belongings, artworks, and everyday items. Some are powerful, some are ordinary, and some are totally bizarre.

In early 2019, I received an emailed inquiry from Ben Truwe, who was searching for a gold ring listed on a 1947 inventory of Jacksonville’s Beekman Bank. Truwe is a Southern Oregon historian, and pre-COVID-19 he offered tours of the historic bank (in period costume!). The inventory, from the Southern Oregon Historical Society collections, stated that within the bank vault “we found...what appeared to be a daguerreotype of a lady, in a plush lined case, and another of a man I took to be C.C. Beekman, in a similar case. Inside this case was a ring (probably gold) inscribed in the inside ‘Lois to Beek’.”

I was pleased to discover the ring was indeed in the OHS museum collection database. After pulling the object from its permanent storage, I was immediately struck by the beauty of its design, the intimacy of the personalized message, and I became entranced by its mystery. Who was Lois?

Given that the ring was inventoried in the bank C.C. Beekman founded and the inventory mentioned him specifically, he seemed like a good place to start learning more. 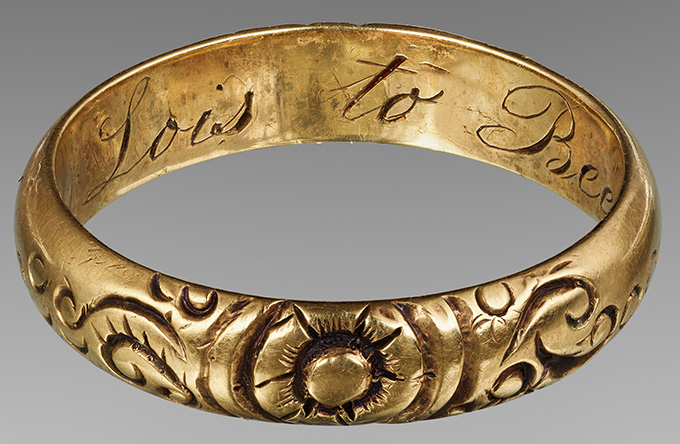 This detail of the gold ring shows the inscribed message inside, “[From] Lois to Beek.” OHS Museum, 70-171. Photograph by Robert Warren. 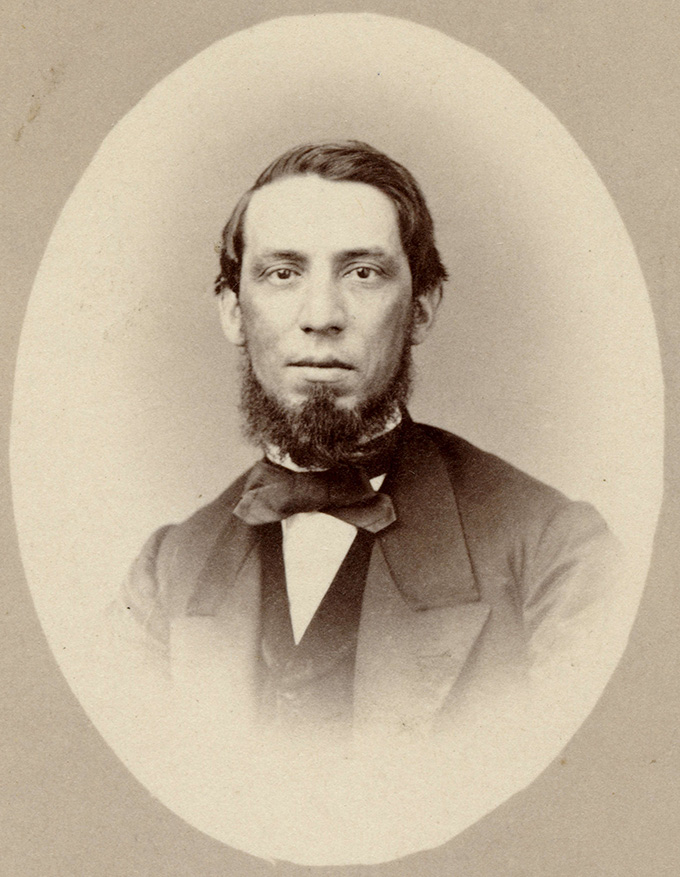 Cornelius C. Beekman (1828–1915) left New York for the West Coast in the early 1850s, living in San Francisco before settling in Jacksonville, Oregon. There, he opened the Beekman Bank and worked there until just prior to his death and its closure in 1915. Beekman made his fortune transporting gold shipments along routes connecting Portland and Sacramento and parlayed his success into other ventures, including becoming mayor of Jacksonville (but losing his bid for governor of Oregon in 1878). He worked as a Wells Fargo agent for 42 years.

After C.C. Beekman died in 1915, the bank was shuttered and remained a time capsule, with his son Ben becoming the heir. Following Ben’s death in 1945, Carrie became the heir of the estate and likely requested the inventory in 1947. Following her death in 1959, some items were donated as a bequest to OHS.

This ambrotype in a plush-lined case is of an unknown woman wearing an off-shoulder dress from the 1850s. Could it be Lois? OHS Research Library, call no. 017602. Photograph by Robert Warren.

When I responded to Truwe with the information about the ring, I asked, “who was Lois?” He shared my interest, and surmised she may be the woman pictured in the “plush” daguerreotype described in the inventory. He also pointed me toward an image he found in OHS’s research library, noted as being from the “Beekman Bank Collection.” The portrait shows a young woman dressed in clothes dating to the mid- to-late 1850s. The clothes are quite fancy, and would indicate she was a woman of means, possibly from the East Coast; someone who could have afforded a costly gold ring. I requested the original daguerreotype be pulled for scanning and was told that the case was “quite plush,” but the image is an ambrotype, not a daguerreotype. Ambrotypes replaced daguerreotypes in popularity in the 1850s, before being supplanted by tintypes in the 1860s. (Daguerreotypes were images set on silver-plated copper, so they are shiny; ambrotypes are set on glass; finally, tintype images are set on tin, among other differences.)

There are several portraits attributed to the Beekman family at OHS, which you can browse in the slideshow below. They may shed some light on this mysterious woman and possible youthful romance. Who was Lois?

C.C. and Julia Beekman’s son, Benjamin B. Beekman, would move to Portland and never marry. He is pictured here around 1867.

Julia Beekman is pictured here around 1864.

This ambrotype is listed in OHS’s research library catalog as having been a part of the Beekman Bank Collection, but it does not appear to be C.C. Beekman’s wife, Julia. The clothing and type of photograph would place it in the mid-to-late 1850s, prior to C.C. Beekman’s marriage. Could it be Lois?

This closed case houses the ambrotype photograph of the unknown woman. The ambrotype likely dates from 1855 to 1865 based on its period of popularity.

This alternate view of the gold ring shows deep, dark, scrolling engravings. The ring was listed in a 1947 inventory of the Beekman Bank in Jacksonville, Oregon, and was discovered near a plush case containing a portrait of a woman.