Home Blog Treasures from the Oregon Vault: A Jarring Experience

The Oregon Historical Society’s museum staff care for over 75,000 objects, including this very large pickle in a bottle. A handwritten notecard taped to the side states that the bottle was part of a furnished house purchase in Eugene, Oregon, in the 1860s.

The Oregon Historical Society is dedicated to making Oregon’s long, rich history visible and accessible to all. For more than a century, OHS has served as the state’s collective memory, gathering and preserving a vast collection of objects, photographs, films, manuscripts, books, and oral histories. Those collections, cared for by museum and library staff, are held in a 100,000 square foot facility sometimes referred to as the Oregon Vault.

In this series, “Treasures from the Oregon Vault,” museum staff highlight their favorites from the over 75,000 objects they safeguard, including clothing and textiles, Native American belongings, artworks, and everyday items. Some are powerful, some are ordinary, and some are totally bizarre.

As we move into fall and begin to wonder what to do with the last of our gardens’ summer bounty, perhaps you might find enjoyment in activities such baking or pickling? While processing some objects that had been stored as backlog, museum cataloger Silvie Andrews came across a glass bottle filled with transparent green liquid, and embossed, “Dr. Henley’s Wild Grape Root IXL Bitters,” which was bottled in San Francisco. Suspended within the liquid was a very large pickle!

The bottle, likely reused after the original contents were drained, was manufactured sometime after 1868, when the company’s trademark was registered in Oregon. The Oregon grape, Berberis aquifolium, has long been used as a natural remedy for indigestion and diarrhea, among other ailments, and the concoction was marketed as “the best tonic in the world.” 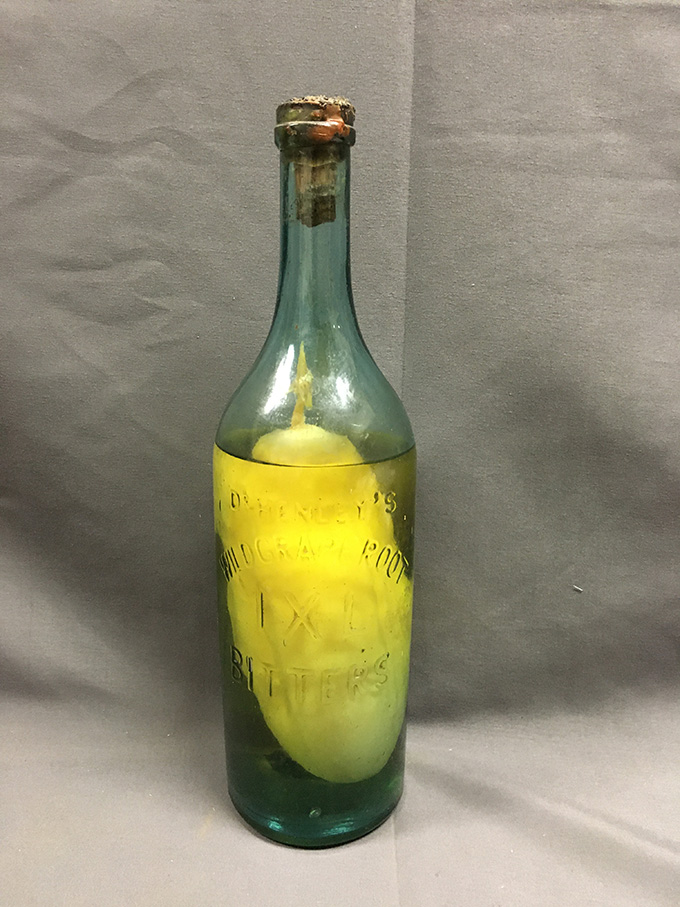 In this photograph of the pickle bottle standing upright, you can see “Dr. Henley’s Wild Grape Root IXL Bitters” imprinted in the glass. The bottle was likely reused after the original contents were drained. OHS Museum, 2018-1.11. 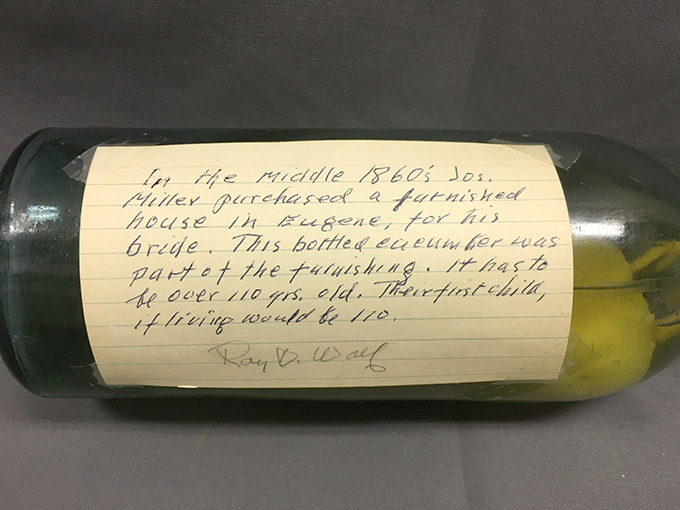 This detail of the handwritten note taped to the pickle bottle gives clues about the age of the bottle’s contents and previous owners. OHS Museum, 2018-1.11.

But the tonic did not originally contain a pickle. Instead, a handwritten index card taped to the back of the bottle explains: “In the middle 1860's Jos. Miller purchased a furnished house in Eugene, for his bride. This bottled cucumber was part of the furnishing. It has to be over 110 years old. Their first child, if living would be 110. Ray D. Wolf.” The cucumber would have had to grow inside of the jar on the vine in order to fit.

Unfortunately, accession records for the pickle do not exist, although we believe it was donated around 1980, based on the dates provided.

Around the time of the rediscovery of the pickle, the Huffington Post published a delightful article about a mystery “bottle of putrid, yellow liquid with an unidentified round, squishy orb floating inside.” It had been rediscovered and a source of great humor and curiosity at the Grant Museum of Zoology at University College London. If you start pickling now, perhaps your great-great-grandchildren will appreciate the hilarious heirloom.

How does a cucumber become a pickle?

It goes through a jarring experience.