This white and green rug, made from cotton string that is knotted and tightly woven, was made by Civilian Conservation Corps workers of Camp Rand near Galice, Oregon. It was a Christmas gift that bears the recipient’s initials. OHS Museum, 2002-47.1. Photograph by Robert Warren.

The Oregon Historical Society (OHS) is dedicated to making Oregon’s long, rich history visible and accessible to all. For more than a century, OHS has served as the state’s collective memory, gathering and preserving a vast collection of objects, photographs, films, manuscripts, books, and oral histories. Those collections, cared for by museum and library staff members, are held in a 100,000 square foot facility sometimes referred to as the Oregon Vault.

In this series, “Treasures from the Oregon Vault,” museum staff members highlight their favorites from the over 75,000 objects they safeguard, including costumes and textiles, Native American belongings, artworks, and everyday items. Some are powerful, some are ordinary, and some are totally bizarre.

This object dates to the 1930s, at the height of the Great Depression, when a group of young men played Santa for the supervisor of their labor camp. Skyrocketing unemployment and poverty rates during the Depression led many Oregonians to enroll in the Civilian Conservation Corps (CCC), a public work relief agency founded in 1933 to provide employment for young, unmarried men. CCC workers lived together in camps, which they often built themselves, and worked on a variety of projects, including transportation improvement, forest and wildlife conservation, range work, flood control, and many other public works. 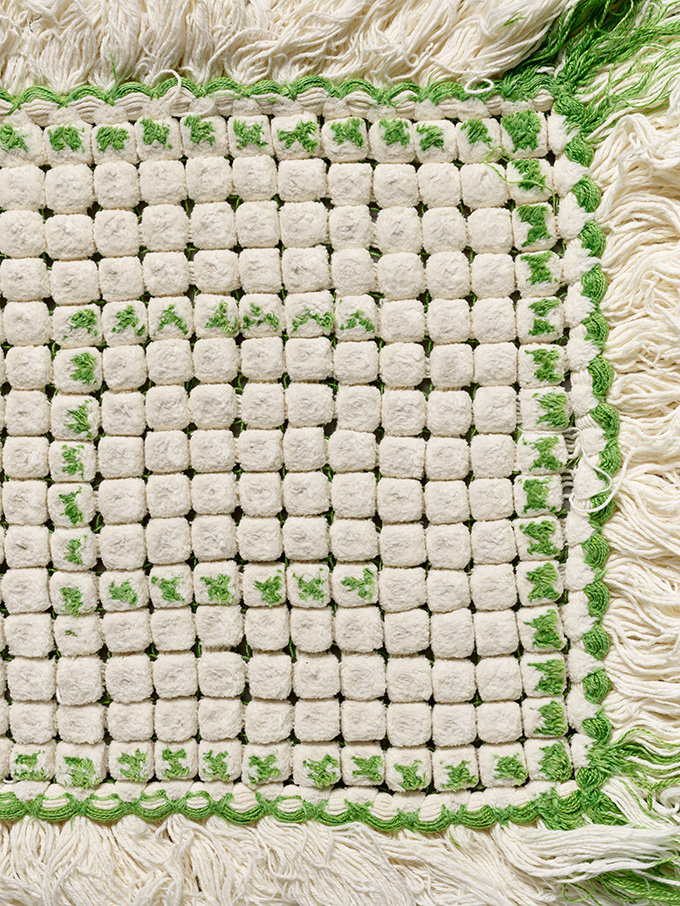 This detail of the rug shows the green and white cotton string knotted to form square pompoms. OHS Museum, 2002-47.1 Photograph by Robert Warren.

The workers of Camp Rand, located in the Siskiyou National Forest near the town of Galice, were assigned a variety of such tasks: they constructed the Galice District Ranger Station, collected ticks for a scientific study of spotted fever, built a cable suspension bridge over the Rogue River at Grave Creek, constructed roads, and fought wildfires. They also took on a clandestine project on the side — a set of handmade Christmas gifts for their supervisor and his family. “The boys” snuck out of camp to deliver a picnic table and benches for their supervisor, Verne V. Church; a doll for his daughter, Mae Ann Church; and this small rug for his wife, Vera Svendsgaard Church (hence the initials VSC), according to Mae Ann’s recollection. The rug is composed of green and white cotton string knotted in bundles and napped to create square pompoms, which are woven closely together with matching string that forms a long, thick fringe on all sides. 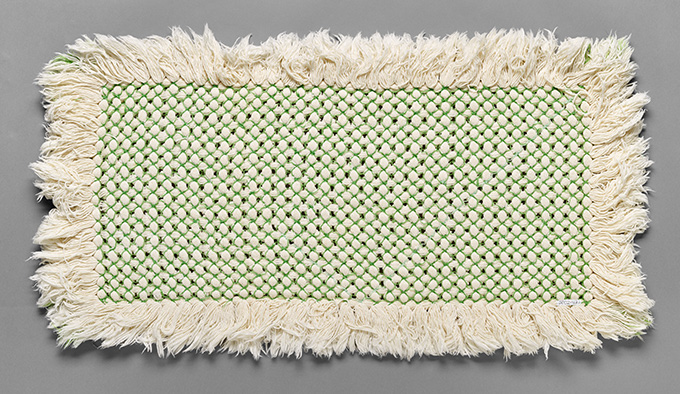 The back of the rug shows how the knotted bundles are tightly woven together with green string. OHS Museum, 2002-47.1 Photograph by Robert Warren.

Camp Rand closed prior to World War II, at a time when many young men who would otherwise be eligible for the CCC were enlisting in the military or registering for the draft. Today, the property is listed on the National Register of Historic Places. It includes nine original buildings constructed by the CCC in the 1930s.

The Church family later moved to Portland. Vera Church used the rug to cover her dressing table bench and later as an area rug in her condo after her husband passed away. Her daughter, Mae Ann Henderson (nee Church), donated the rug to OHS in 2002.