Every now and then, as a result of clerical errors and misplacements, museum workers encounter cryptids — historical objects that are referenced in many places but have not been seen within human memory, or at least not by current staff, and which some consider to be a myth. The Oregon Historical Society (OHS) is not without its fair share of these, and finding one is always a cause for celebration. While staff keep rigorous track of all materials that enter the museum’s care, over a century of shifting standards and best practices, combined with a collection of around 80,000 three-dimensional objects, has ensured a certain number of institutional mysteries.

One such mystery, a pennant flown from the mast of the U.S.S Oregon as it traveled back to the United States from China in 1901, resurfaced shortly before the COVID-19 pandemic struck in March 2020. Back in 1959, OHS accepted over 6,000 objects from the then recently closed Battleship Oregon Museum, and the pennant was supposedly a highlight of the collection. It was such an attraction that it made the news on several occasions, first when several representatives of the ship’s crew presented it to the State of Oregon in 1901, and later when the state returned the pennant for the retired battleship’s ceremonial mooring on the Portland waterfront during the 1925 Rose Festival. (The Oregon remained in Portland as a museum and war memorial until World War II, when the War Production Board claimed it for scrap.) The pennant was extremely famous and extraordinarily well-documented. It was also missing.

Recently, while processing a group of flags and banners for an unrelated project, I discovered a red, white, and blue banner that did not appear to have a museum ID number, rolled around a cardboard tube. I wondered: could it be the Battleship Oregon pennant?

Unfortunately, in my eager curiosity and, perhaps, hubris, I began to unroll the pennant before considering what I would do with it once it was out. It took a long time; long enough for me to wonder if the pennant actually had an end, or if I would be unrolling it into infinity like some kind of star-spangled Mobius strip. I began to miss my family. Would they wonder what had become of me?

Finally, the last foot of the pennant slid off of the roll and onto the table. The hoist (flagpole end) was inscribed with the name of the U.S.S. Oregon chief quartermaster, H.F.W. Brauer; this was the homeward bound pennant, my white whale. Exhausted, I sat down at my computer and pulled up the newspaper coverage from July of 1901, when delegates from the ship, including Brauer, had presented the pennant to the State of Oregon in a widely publicized ceremony. The festivities included a parade, after which the pennant was raised at the state capitol — and this was the part that had somehow escaped me before — all 420 feet of it. 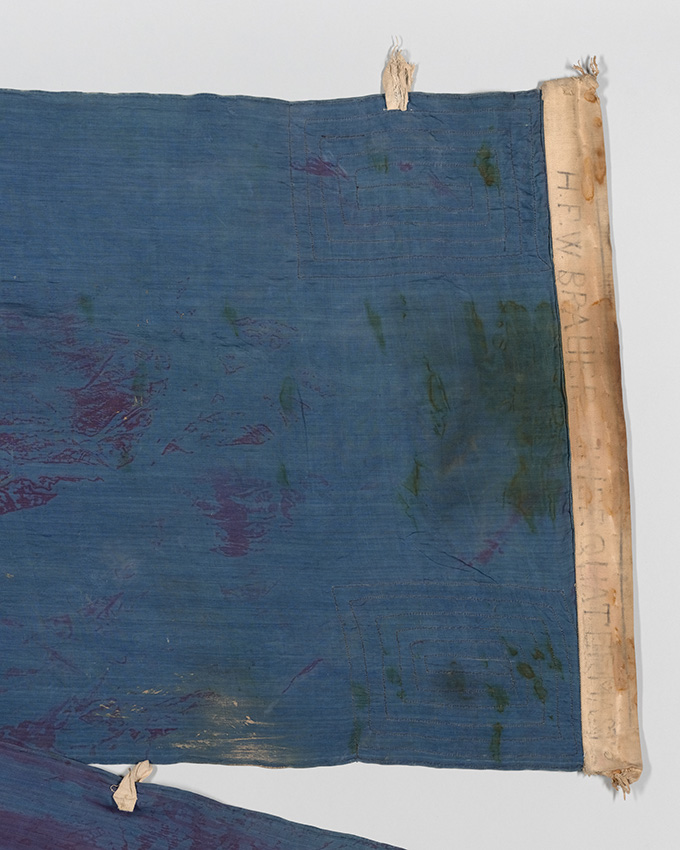 Quickly, I texted Kathleen Daly, OHS’s other museum cataloger and resident textile authority, who was inconveniently on vacation. “What do I do with a 420-foot pennant?” I asked. “Don’t unroll it,” she replied. One week later, OHS closed due to COVID-19. I worked from home for two months, the pennant haunting my every thought.

This pennant dates to 1900 or early 1901, when the Oregon flew it to signal that it was returning to its home port. A homeward bound pennant was supposed to be a foot long for every day the ship had been away, which sometimes required sailors to stitch extra yardage onto the end. This pennant seems to have suffered the opposite problem: when measured, it comes out to just over 215 feet long, a significant disparity to its description of 420 feet in the Capital Journal of July 16, 1901 (the Oregonian of the following day reported its length as 378 feet). This disparity may be due in part to an accident with the ship’s propeller, described in an Oregon Statesman article of May 12, 1925, that mangled the last 100 feet of the pennant and may have caused it to be hemmed in a swallowtail rather than tapering to a point. A ship’s pennant would usually be composed of wool bunting, but as this pennant was commissioned — likely in China or Japan — with the eventual goal of ceremonially presenting it to the State of Oregon, its material is silk. Exposure to moisture, likely as the pennant flew from the ship’s mast in 1901 or 1925, led the red dye to bleed onto the white and blue sections, resulting in its mottled pink appearance.

For something this large and unwieldly, museum staff often take incomplete photos that we use purely for internal reference. In the case of the pennant, though, I was hoping for better. Fortunately, OHS Digital Services Photographer Robert Warren agreed to lend his expertise to the effort once we could safely return to OHS’s Vault, our off-site storage facility, for in-person work. First, Kathleen and I laid the pennant out on the X-Y table in the Digital Production Lab so that Rob could photograph it in sections, then stitch them together using the magic of photo editing software.

When it became apparent that this process would take the better part of our lives owing to the length of the pennant, we regrouped; we spread out the pennant on a makeshift backdrop of muslin over ethafoam sheeting, and Rob bravely went up in the scissor lift to take a photo from above. After that, Kathleen and I (okay, mainly Kathleen) rolled it back up, all 215 feet of it, making sure to smooth out the wrinkles and creases as we went. 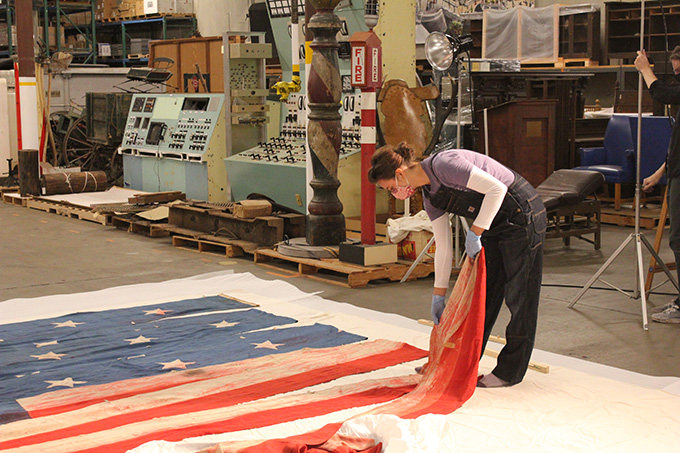 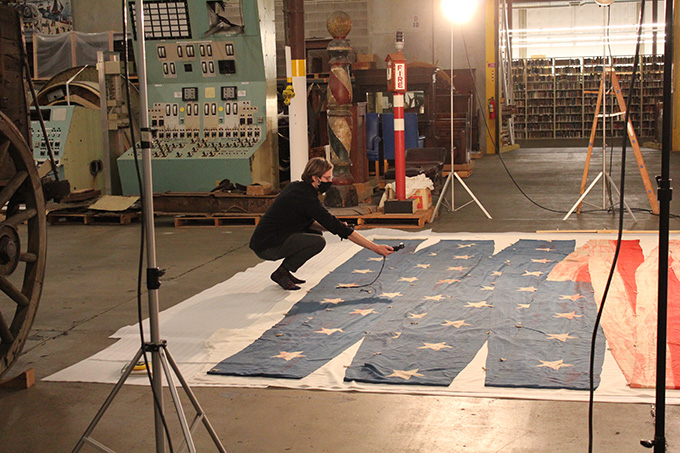 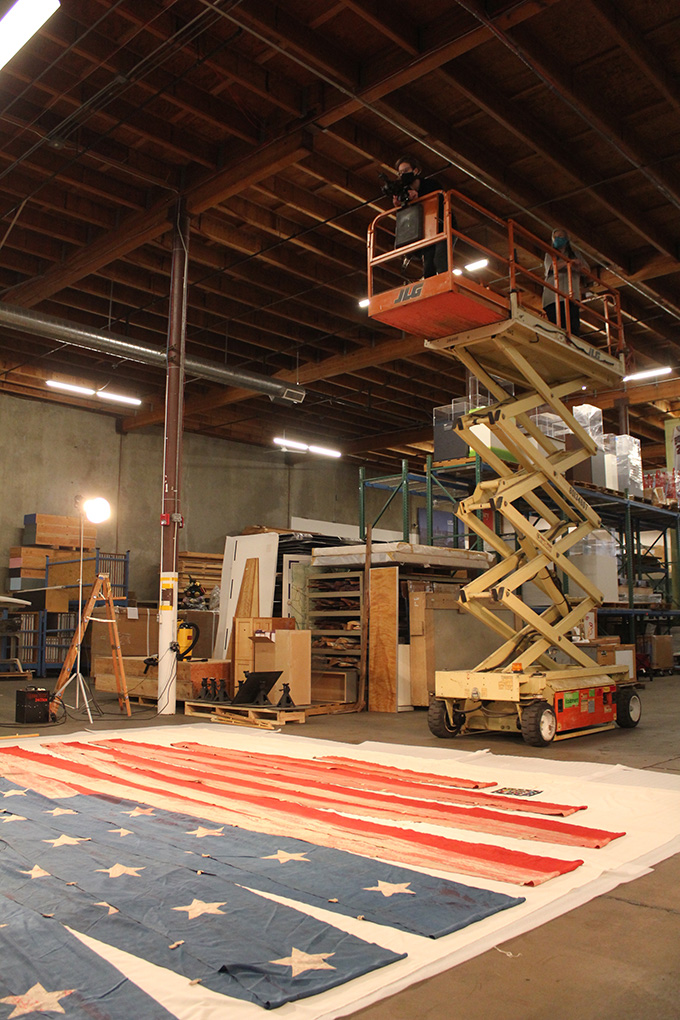 Was it a mistake to unroll the pennant in the first place? Possibly. But it was worth it for the chance to rediscover and document one of the more unusual items in the collection and to follow its roller coaster trajectory through fame and obscurity. Here it is now for another quick turn in the spotlight.

Another view of Robert Warren photographing the U.S.S. Oregon pennant using a scissor lift. In the left of the photo is a Portland Fire Department alarm box that once stood on the Portland State University campus. To the right is a freight wagon once used to haul borax from Alvord Lake to Winnemucca, Nevada.

This close-up view of the U.S.S. Oregon Homeward Bound Pennant shows appliqued white stars on a blue silk background with dye bleed from the red section. The small white pieces on the top edge are cotton twill loops that were likely added for display purposes by the Battleship Oregon Museum.

Close-up of appliqued white stars on blue silk background; red streaks are dye transfer from the red section of the pennant. 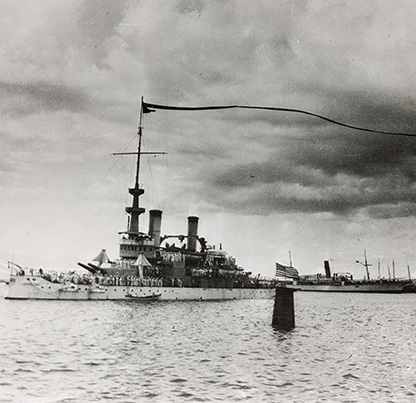 Underground History: Lost And FOUND In The Archives

The Jefferson Exchange, Jefferson Public Radio. The scene at the end of "Raiders of the Lost Ark" is one of the most famous in movie history: a great historical artifact is packed away in a huge warehouse, unlikely to be seen again. The story of the banner from the Navy battleship U.S.S. Oregon reminds us of that scene. With one key difference: the banner was found, in storage at the Oregon Historical Society. This...