Home Blog From Whence Did it Come and to Where Did it Go?: The 1918 Influenza Pandemic in Oregon

On October 8, 1918, the “Oregonian” reported on four cases of influenza and “six other of suspicious character” at Benson Polytechnic School in Portland, Oregon. This first outbreak in the city prompted the school to put its 300 Student Army Training Corps (S.A.T.C.) students in quarantine. Members of the Benson Polytechnic S.A.T.C third section in this photograph are wearing masks on October 27, 1918. Photograph courtesy of the National Archives and Records Administration.

In a Spring 1963 Oregon Historical Quarterly article, “The 1918 ‘Spanish Influenza’ Pandemic in Oregon,” author Ivan M. Woolley opens with a question: “From whence did it come and to where did it go?” This question about plagues and pandemics, Woolley argues, is one that scientists and historians have pondered for ages. Woolley cites examples of pandemics that are well documented throughout history: an onslaught described by Hippocrates in 412 B.C.E. that destroyed an Athenian army, the Black Death of the fifteenth century, and the 1918 “Spanish” influenza pandemic, which infected twenty to thirty percent of the world’s population and resulted in 50 million deaths worldwide — about 675,000 of them Americans. The Oregon State Board of Health listed 48,146 cases of the virus between October 1, 1918, and September 30, 1920, and 3,675 resulting deaths.

As we all practice physical distancing and wait for stay-at-home orders to ease, public health experts warn that moving too quickly could have serious implications in terms of the disease’s spread — and resulting deaths. Historians are well positioned to echo these warnings, especially when analyzing the 1918 influenza pandemic (which occurred during World War I) and Oregon’s response to COVID-19. Historical context matters, and you’re in luck! Making relevant connections to history is one of the Oregon Historical Society’s specialties, and we’ve even created an illustrated timeline* to assist.

The Summer 2017 issue of the Oregon Historical Quarterly features a special section, “World War One Centennial Roundtable,” which is an excellent resource for that historical context. This virtual roundtable includes an introduction by Dr. Kimberly Jensen and Dr. Christopher McKnight Nichols and six essays shedding light on the “many complex questions and changes to Oregon and the nation” during that period. The articles show that the 1918 influenza pandemic and response did not develop in a vacuum; those events were among a series of World War I-era “conversations” about citizenship, suffrage, surveillance, the definition of Americanism (and who could identify as such), and the country’s response to turbulent times. The experiences described in the essays resonated in 2017 at the one hundredth anniversary of World War I, and they are just as important today in guiding how our “new normal” might look beyond this pandemic. 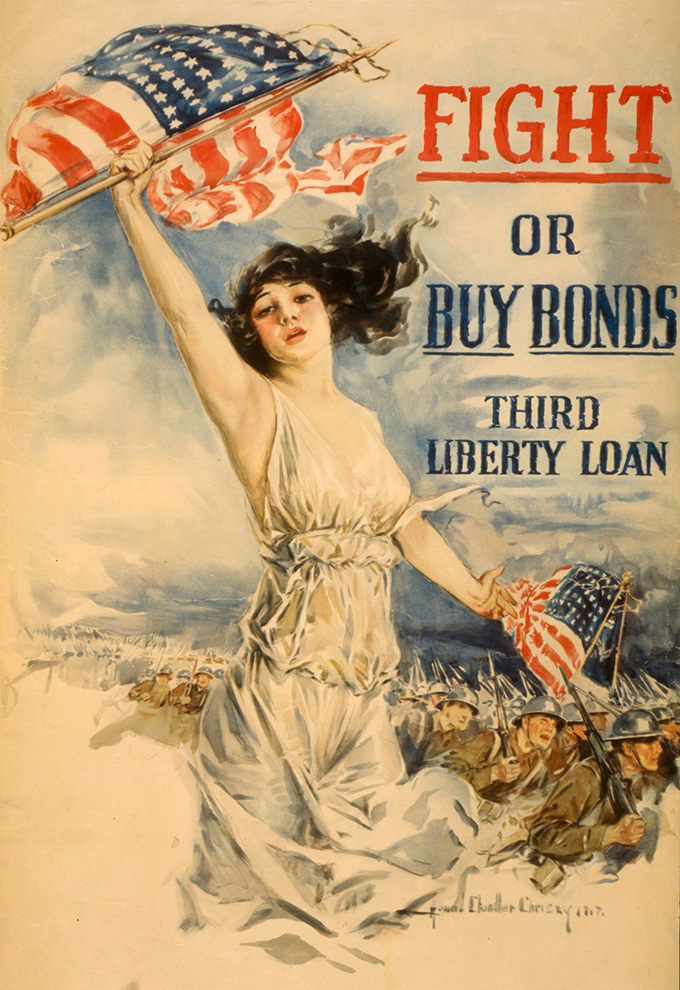 The United States entered World War I in 1917 and both troop movement and Americans’ mass patriotic support of war efforts, such as parades and bond drives, helped spread a virulent strain of influenza around the world. This Third Liberty Loan poster is an example of that patriotism, encouraging Americans to “fight or buy bonds.” Library of Congress, 3g09735u 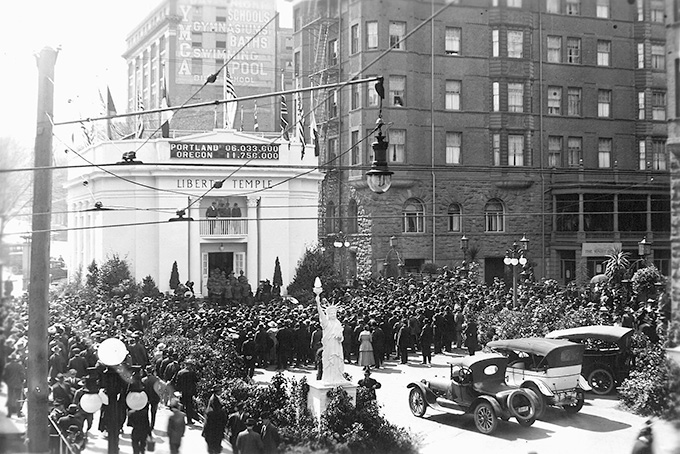 Portland’s Liberty Temple, located at Southwest Sixth Avenue between Morrison and Yamhill streets, was constructed by volunteers in 1918 from donated materials as a place for patriotic rallies. It was also the state headquarters for the Third Liberty Loan Drive, which encouraged Americans to participate in the drive to fund World War I. OHS Research Library, OrHi 4497

OHS is fortunate that Nichols serves on its Board of Trustees and has spent countless hours emailing, Tweeting, and hosting Zoom meetings to help us further understand those connections. On April 23, 2020, he gave an excellent online talk in partnership with WorldOregon, “What We Can Learn from the 1918–1919 Pandemic,” about the 1918 influenza pandemic and its implications. Nichols describes how the United States’ entry into World War I and resulting troop movement, mass patriotic gatherings, wartime censorship, and misinformation helped spread the disease. He touches on xenophobia in the United States and in Europe, which led to the pandemic being falsely attributed to the Spanish — even though it’s pretty clear it originated in Kansas — and how similar arguments emanate today from U.S. leaders and trickle down to the public.

Nichols also describes how, throughout the 1918 pandemic, minimal or conflicting public health guidance from the U.S. federal government left local public health officials to make their own decisions about how seriously (or not) to take the outbreak. This rings true today. And after reading through Woolley’s 1963 reflection, listening to Nichols’s fascinating talk, and browsing other resources that document the 1918 “Spanish” flu pandemic, you’ll be struck by the many other similarities: shuttered schools and banned public gatherings, social distancing mandates, massive cleaning efforts in public places, telephone store orders, and even a hot debate about whether masks were effective and whether to make them mandatory outside hospital settings — spoiler alert, depending on the day and news outlet, some maintain the jury’s still out on that one. 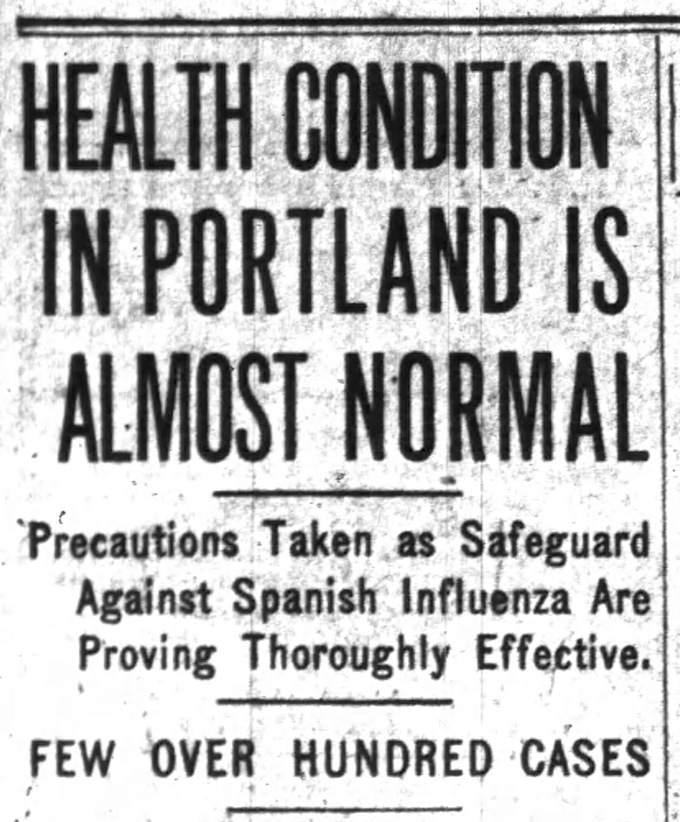 On October 20, 1918, the “Oregon Daily Journal” ran the headline “Health Condition in Portland is Almost Normal” one day after over 1,000 cases were reported in Portland and the Civic Auditorium expanded its capacity as a temporary hospital from one hundred to two hundred beds. Conflicting information such as this was prevalent throughout the state during the second wave of the 1918 influenza pandemic. 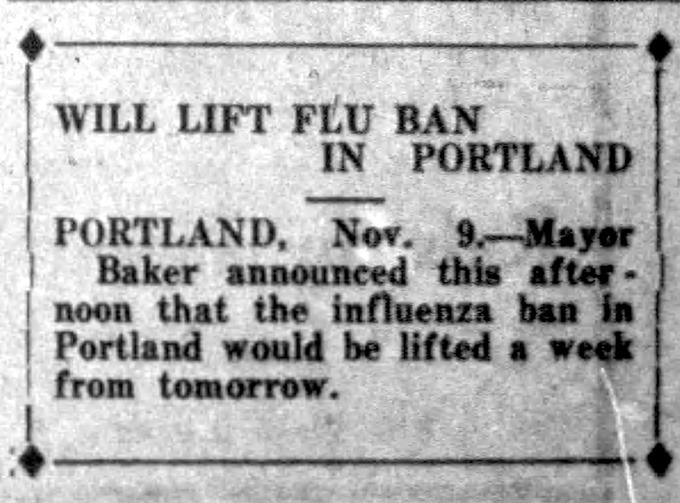 About a month after closing schools and all public places and gatherings, Portland announced it was lifting lifted its influenza ban. The ban was short-lived, however: within a couple weeks, the city’s cases started to rise again, and by December, hospitals were once again at capacity. “Albany Daily Democrat,” November 9, 1918, p.1

So, how well did Oregon handle the pandemic of 1918? And how does that relate to today? Well, as any good historian would advise: it’s complicated. Nichols describes Portland’s response to the 1918 pandemic as intermediate compared to other places — despite a delayed response with mixed public health messaging, and easing stay home orders too soon, the city did pretty well in suppressing peaks. Those delays and inconsistent implementation, however, prolonged infections well into 1919. In other words, the city flattened the curve, but it stretched out over several months, which led to quite a large number of cumulative deaths.

Today, we’re still managing what experts believe is the first wave of the virus — remember the first wave in 1918 was mild compared to the virulent second wave that swept through the United States in the fall of 1918. During the COVID-19 pandemic, Oregon has definitely benefitted from implementing early stay-at-home policies, and only time will tell how the state will fare in the long term as we continue to see the virus spreading throughout communities. As cities and states outside the Pacific Northwest are already making rapid decisions to ease social distancing, one thing we already know is that the virus is disproportionately affecting communities of color in Oregon and across the nation. Viral RNA is just one factor in determining our outcomes — and the outcomes of our most vulnerable populations.

As Woolley concluded in his 1963 article: “Thus do pandemics come into being, bringing death, misery and great economic loss, and thus do they wax and wane. These are the reasons why our public health agencies must keep ever constant vigilance, and this is why theirs is a vital and never-ending task.” And if history has any lessons to teach about COVID-19 and beyond, it is that evidence-based and transparent information should be our guide as we navigate our rapidly changing world.

*I’d like to thank my colleague Elerina Aldamar, OHS Reference Archivist, for using her time and research talents to gather newspaper articles for this timeline. It would not have been possible without her help.

University of Michigan Center for the History of Medicine and Michigan Publishing, Influenza Encyclopedia, “Portland, Oregon.”

We are grateful for the many individuals and organizations who have made leadership gifts to the OHS Pandemic Survival Fund, helping to replace revenue OHS has lost as a result of COVID-19. These donations further this important fundraising effort, and we are so grateful for the support during this challenging year for all non-profits.